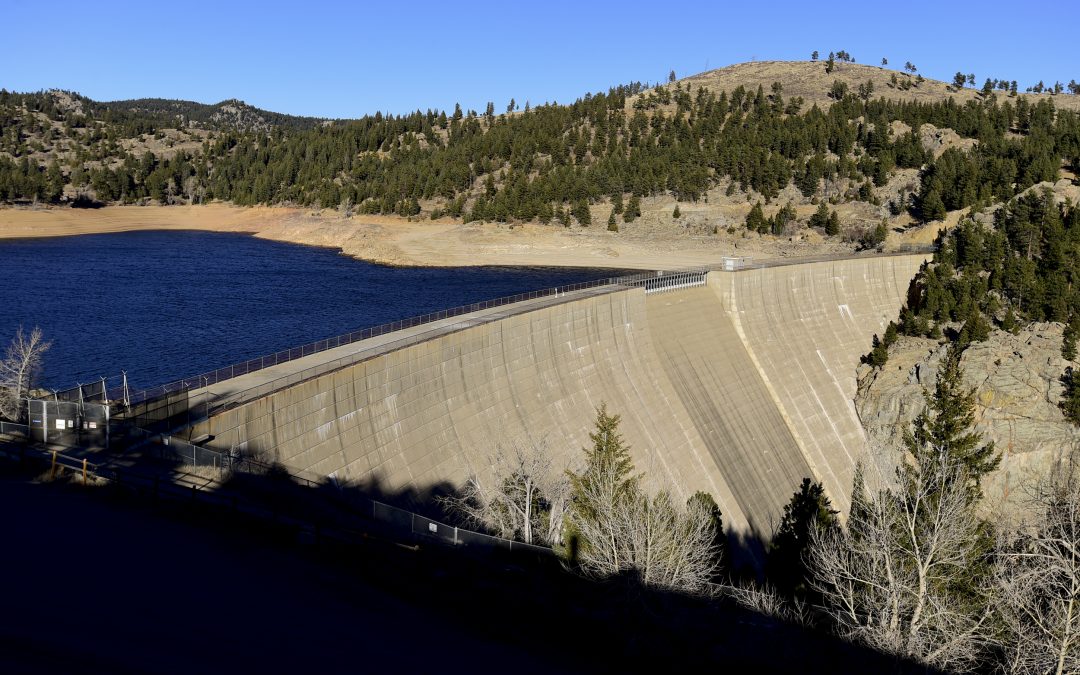 BOULDER COUNTY, CO - DECEMBER 18:The dam at Gross Reservoir in Boulder County on Dec. 18, 2018. The reservoir is owned and operated by Denver Water. South Boulder Creek flows from the dam. (Photo by Matthew Jonas/Daily Camera)

Denver Water will not, for now, appeal Boulder County’s decision that the utility’s $464 million Gross Reservoir expansion project must go through a rigorous land use review before construction begins.

Instead it has entered talks with Boulder County officials to resolve the impasse.

In October, Denver Water asked to be exempted from the county-level review, citing zoning laws and the project’s oversight by the Federal Energy Regulatory Commission (FERC). Because Gross Dam produces hydropower, it is regulated by FERC.

While county officials said they are willing to discuss possible solutions, they’ve also said if Denver Water ultimately appeals to the court system for relief, they will fight rather than give up their right to review the massive construction project.

“We are in what I would characterize as very preliminary talks with Denver,” said Boulder County Deputy Attorney Conrad Lattes. “Our goal is not to stop this project. It is to apply the criteria of our land use regulations and see how it comes out. We should have a say in how the largest construction project in the county’s history would be done.”

Denver Water officials declined to comment, reiterating in a prepared statement that they too were willing to discuss potential solutions.

Historically in Colorado, counties have had broad discretion to require what are known as 1041 reviews. The term refers to a 1974 state law that gives local governments extensive authority to examine activities within their borders, including water projects, whether the dams and reservoirs provide water to county residents or not.

Though the cities of Boulder and Lafayette receive water for environmental purposes from Gross Reservoir, Boulder County to date has not, according to Lattes.

But if a 1041 review occurs, the county could impose conditions on the expansion, including additional water supplies for the environment or requirements that Denver conserve more water before the expansion occurs, according to legal filings.

Earlier efforts by Denver to challenge the use of 1041 reviews have failed, including those in Grand and Eagle counties in the 1980s.

But Denver’s current claim, that federal law trumps county land use regulations, may have more success, according to Sarah Krakoff, a University of Colorado at Boulder law professor who is an expert on public land law.

“The federal licensing that occurs through the Federal Power Act is described broadly as being preemptive of state or local licensing,” Krakoff said.

But the county could argue that its concerns haven’t been adequately addressed by FERC, she said, a strategy sometimes used by local governments to counter a federal claim.

As the legal wrangling continues, Save The Colorado, and five other environmental groups,filed suit this week to stop the project altogether, saying it will cause too much damage to the Upper Colorado River watershed.

But Lattes and others maintain those decades-old decisions are no longer relevant because of the ongoing drought, population growth and climate change.

Last year the expansion project won what was considered its most critical permit from the U.S. Army Corps of Engineers, and Denver Water officials had hoped the FERC approval would be the last needed before construction could begin.

But that hasn’t occurred, in part because some environmental groups, such as Save The Colorado and the Sierra Club, oppose the project and believe it is unnecessary.

Here’s why: In 2002, when Denver Water began its permitting work, it estimated that it would run short of water by 2030. To prevent those shortfalls from developing, and to ensure the north end of its system could operate effectively, it proposed raising the dam at Gross, capturing more of the water it owns from the Upper Fraser River in Grand County on the other side of the Continental Divide.

The utility said it would need an additional 34,000 acre-feet of water per year, enough to serve some 70,000 homes. It proposed meeting part of that need, 16,000 acre-feet, through new water conservation programs. It would obtain the rest by diverting 18,000 acre-feet of additional flow from the Fraser River to store in Gross Reservoir each year, according to filings by Boulder Water in the FERC proceeding. Denver Water declined to comment on the accuracy of that analysis.

Boulder County estimates that Denver Water customers have been able to reduce water use by more than 75,000 acre-feet annually since the original Gross Reservoir expansion studies were conducted in the early 2000s. The county, along with some environmental groups, has argued that the ability to conserve that much water could eliminate the need to expand the reservoir.

How that argument will play out with federal energy regulators isn’t clear. FERC officials declined to comment on the expansion or when its own review of the project would be complete.

Under the CRCA, Denver Water agreed to provide $64 million in cash and water for environmental projects in Grand County, according to Ed Moyer, Grand County’s assistant manager. Those projects include restoring stream habitats and providing water to boost flows in the Fraser River in Grand County. The Fraser is part of the Upper Colorado River watershed. The region’s native flows have already been heavily diverted by Denver and Berthoud-based Northern Water. And new studies indicate that they will likely be reduced further in the future due to climate change and recurring droughts.

Those studies were not available when the original work on the Gross Reservoir expansion was underway. Now, some environmental groups are asking that the new data be included in an updated analysis of the project.

But Moyer said any halt to the expansion project would do immense harm to Grand County’s and Denver’s planned efforts to offset past as well as potential future environmental damage that could occur due to those water diversions.

“If the project isn’t approved, it will be a tremendous loss to Grand County, its citizens and visitors, and the aquatic environment of the Fraser River, Colorado River and West Slope,” he said.

How the project might be reshaped by a 1041 review will become clearer in coming months. But the controversy isn’t likely to die down soon.

“We think, before Denver Water starts taking more water from other drainages and imposing construction on other counties that won’t benefit from this project, they need to look at how they can use the water they already have,” Lattes said.