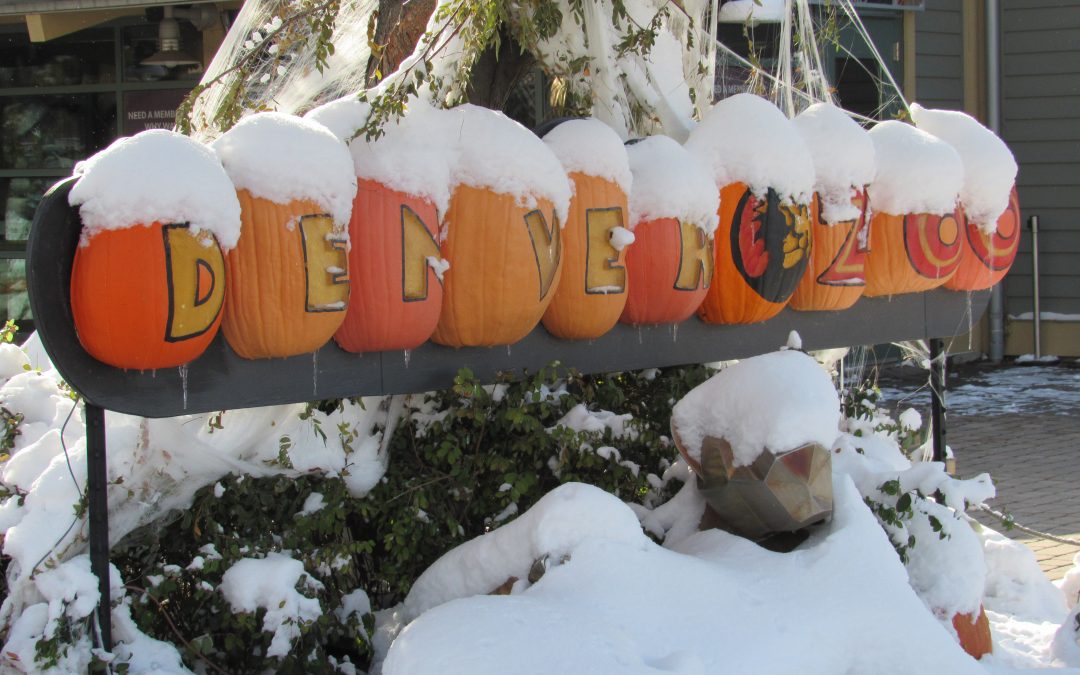 Snow-covered pumpkins welcome visitors to the Denver Zoo on Oct. 29, 2019. The Zoo is one of the agencies that has installed Gutter Bins to filter its stormwater. Credit: Jerd Smith

As water quality in urban rivers and streams comes under increasing pressure, Denver is testing new devices that capture trash and other debris in stormwater before it hits the stream, improving the environment and offering ways to save thousands of labor hours in cleanup time.

“Stormwater is a funny thing,” said Chris Tippie of Frog Creek Partners, a Casper, Wyo.-based company which manufactures Gutter Bins and other similar devices. “[Stormwater] drains into holes in the ground, and that water is channeled into the nearest watershed. That’s what the Romans came up with, and it really hasn’t changed since then.”

New trash-catching devices such as Gutter Bins are designed to filter stormwater and trap debris, collecting everything from cigarette butts to soda cans, sediment and other contaminants without clogging stormwater drains.

Denver is conducting a two-year pilot program in hopes of finding a cost-effective way to keep more of that pollution out of its system, which includes 22,000 stormwater inlets.

Like other communities, Denver’s stormwater is regulated by the U.S. Environmental Protection Agency and the Colorado Department of Public Health and Environment (CDPHE). The city is in the process of having its state-issued stormwater discharge permit renewed, a process that should be completed sometime next year.

Thus far, the city is in compliance with all the laws on the books, according to CDPHE, but health officials and others say there are good reasons to attempt to clean up the problem now, due to the city’s population boom and rapid development.

“Cities are seeing rivers as an asset,” Tippie said. “Now even cities that aren’t pressured by regulatory demands want to do something because it’s the right thing to do.”

Denver’s Department of Public Works is testing several devices and systems as part of the pilot. It has also installed trash vaults, an underground concrete structure that holds trash until workers can vacuum it up, and it is testing pockets of vegetation systems in the city that can also filter water and trap trash. 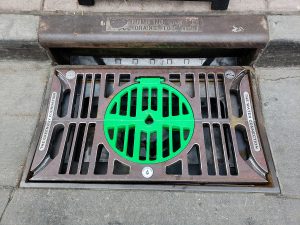 A Gutter Bin is one of several devices being tested by Denver and other Western cities as a way to trap trash without clogging stormwater drains. Credit: Frog Creek Partners

“You might have two or three or more options depending on the application,” said Reza Kazemian, director of the Denver Public Works Wastewater Management Division. “That’s what this pilot program will teach us.”

Denver is one of dozens of cities tackling the problem, including Colorado Springs, Fort Collins and Sheridan, Wyo., to name a few. The reckoning has been a long time coming.

Trash wasn’t the first concern when the Clean Water Act was enacted in 1972, according to Kevin Jehl, water quality market manager for Naperville, Ill.-based ADS, another device manufacturer. Its FleXstorm filter is another one being tested in the Denver pilot.

“You start with the bad stuff and make improvements along the way,” Jehl said. “Twenty years ago, when water fell from the sky, all you were trying to do with it was drain it as quickly as you could.”

As cities kept improving their sewer systems, they began to look at the causes to problems rather than just fixing the problems themselves, Jehl said. “As farm fields become shopping centers, all that water has to go somewhere, and that has created the need for some protection.”

Thousands of points of departure

“But we can’t be in 22,000 places every day,” he said. “We are looking for something to keep the trash so it will be there for us to clean up when we can get there.”

The city has so far targeted a few heavy-trash collection sites, and hopes to figure out which ones are the best places to capture the most garbage.

Meanwhile, the Denver Zoo was struggling with flooding in the walkways between exhibits, especially the lion exhibit at the entrance, because trash collected in their storm drains, said Jennifer Hale, the zoo’s director of marketing. The bins from Frog Creek, placed at the source of the problem, did a good job of capturing the trash and preventing clogs that had previously caused the water to back up and flood key visitor areas.

The $6,000 investment in the bins helped protect an $80,000 capital project near the lion exhibit, Hale said, making it worth the money.

“We haven’t even had to empty them as much as we thought we would,” Hale said, “and it has kept our storm lines empty and free.”

Sheridan, Wyo., added 13 bins thanks to a grant from the Wyoming Department of Public Health and Environment, said Tom O’Leary, project manager for the City of Sheridan. Since December of 2016, when the first bin went in, the city has collected 1,630 pounds of garbage.

“I’ve had several calls since then from California, Maryland and other cities,” O’Leary said. “We’re now thinking about adding more. I would say it’s working.”

Nicole Rowan is the clean water program manager for Colorado’s Water Quality Control Division, a sub-division of CDPHE. Typically, health officials measure bacteria and other elements deemed a threat to public health, such as e-coli, but the department doesn’t regulate trash and sediment in streams, at least not as a standard procedure, she said.

That means as long as Denver employs what is called a best management practice, the CDPHE won’t hold the city responsible for the trash or sediment that goes into the river.

That could change, however, if an agency or individual proved that trash or sediment that the city allowed to escape into the river was impairing one or more critical uses of the South Platte River. So if the debris hurt aquatic life, or impeded recreational opportunities such as swimming, boating or fishing, or contaminated drinking water, then the department would enact stricter standards.

“There are potential ways for states to look at this from a regulatory framework where the waterway is listed as impaired based on the amount of trash going into a river,” Rowan said, “but that hasn’t happened in Colorado.”

Other states have already imposed much tougher rules, including California, which has set a 2030 deadline for zero trash in stormwater systems.

“Under those guidelines, if one cigarette butt dropped in the street in Los Angeles washes into the system,” Tippie said, “that’s a violation.”

That’s the most extreme example, but other cities and states are becoming “hyper focused” on trash collection. “Nationwide, the level of enforcement is going up year after year,” Tippie said.

Dan England is a freelance writer who lives in Greeley and the media adviser for Laramie County Community College in Cheyenne, Wyo.