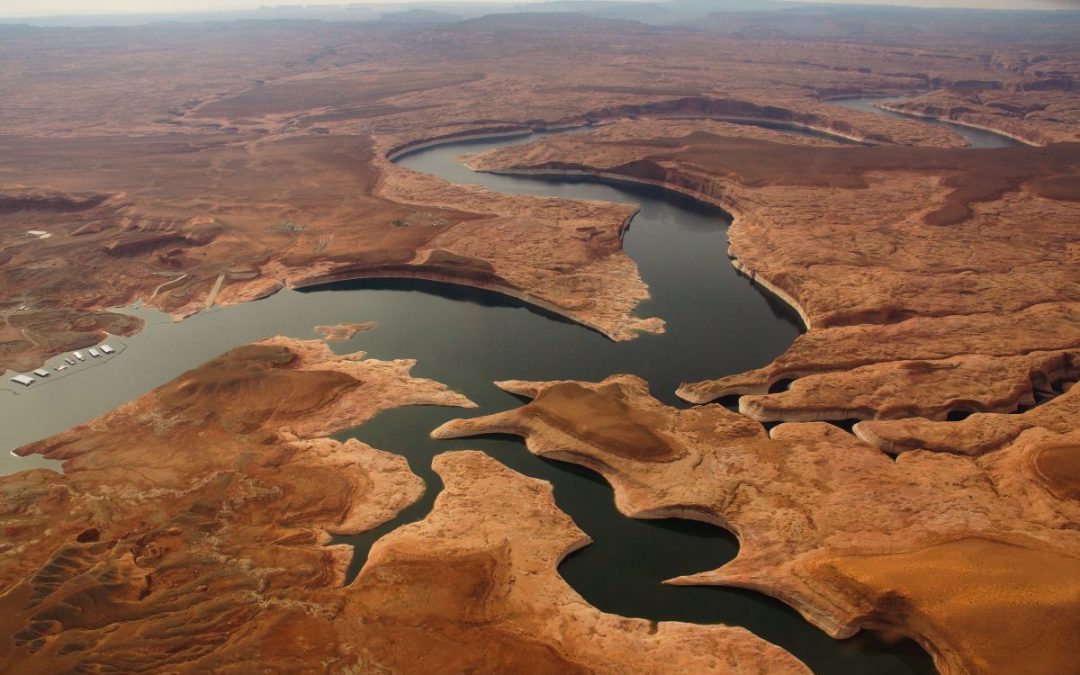 Lake Powell, created with the 1963 completion of Glen Canyon Dam, is the upper basin's largest reservoir on the Colorado River. But 2000-2019 has provided the least amount of inflow into the reservoir, making it the lowest 20-year period since the dam was built, as evidenced by the "bathtub ring" and dry land edging the reservoir, which was underwater in the past. Credit: EcoFlight

Seattle has begun a mobile wastewater collection program to gather gray and black water from RVs and improve the city’s water quality, which had begun to deteriorate as the homeless population grew and wastewater spills from campers became more common.

Las Vegas has structured its water rates to encourage people to conserve while ensuring that low-income households have access to affordable, clean water.

“We’re facing challenging times,” said Adel Hagekhalil, general manager of the Metropolitan Water District of California, the largest water utility in the United States. His comments came Nov. 3 at the Water in the West Symposium in Denver, a conference sponsored by Colorado State University and Denver Water.

Hagekhalil was among several Western water utility leaders who said efforts to address shrinking water supplies due to drought and population growth means utilities will have to change dramatically in the next 50 to 100 years.

MWD, for instance, has always imported water to distribute to a service area that includes some 20 million people. But now the agency is looking for ways to increase local supplies as its Colorado River supplies shrink.

The answer, in part, is a sophisticated effort to capture the region’s sometimes copious rainfall and inject it into aquifers, where space is plentiful. The utility is also creating urban wetland parks where former parking lots stood and providing subsidies to help low-income homeowners repair unsafe and leaking water delivery pipes.

“It’s no longer enough for us to be an importer of water,” Hagekhalil, said. “We need to leverage resources to create more local water and to collaborate across our region to store our groundwater.”

In Seattle, a water-rich city, the challenges lie in soaring water treatment costs and a growing population base that includes a significant number of campers and RV dwellers, driven out of traditional housing because of rising prices.

“Like everyone else, we are trying to change the way we do business,” said Andrew Lee, interim general manager of Seattle Public Utilities.

After watching the number of wastewater spills rise almost as quickly as housing prices, the utility decided to create a mobile collection program for people who had no other way to dispose of their sewage.

“It’s been a game changer and a life changer for a number of people,” Lee said.

Western utilities are spending millions of dollars to build water recycling plants and new storage systems and to upgrade water treatment systems. At the same time, the call for more affordable water is growing as well.

To address the issue Las Vegas provides a 50% subsidy on the first 5,000 gallons of residential water used and charges service fees based on the size of the delivery pipe. Smaller homes pay just $5 a month, while the area’s largest homes pay a service fee of $300, according to John Entsminger, general manager of the Southern Nevada Water Authority, which serves Las Vegas and the surrounding area.

“We need our water prices to send a conservation signal to the high water users,” Entsminger said.

“But we want lower water users to have affordable water.”

To that end, the utility charges customers just $1.74 per thousand gallons for low levels of use.

“That’s how we attempt to make sure that the disadvantaged parts of our community and the poorest parts of it still have access to clean, cheap water supplies for necessary uses,” Entsminger said.

And to help the region address ongoing water shortages, Nevada lawmakers this year made it illegal to use any precious Colorado River water on “non-essential turf.”

But more work lies ahead and the utility leaders said the answers would be found in better integrated water systems capable of addressing supply and affordability issues.