For Thanksgiving, a small market, a small town and a modern-day communal well

Ignacio: On a rainy Wednesday afternoon, one week before Thanksgiving, shelves at the Farmers Fresh Market here are laden with potatoes, pies, squash, sacks of flour, and cans of pumpkin filling.

Amos Lee, the manager, towers above most of the customers, including 90-year-old Joe Toledo, a local artist who comes to the market weekly for groceries and something else: free water.

Joe and Amos chat about art and a picture Joe wants to give Amos and his family for Thanksgiving. In the artist’s shopping basket are two five-gallon jugs of water he and his wife have just filled at a water station in a corner of the market’s produce section.

Hundreds of families in and around Ignacio, 23 miles south and east of Durango, Colo., don’t have access to clean water. Their private wells, according to the Colorado Department of Public Health and Environment, are often high in arsenic, selenium and nitrates, much of which occurs naturally and some of which is associated with agriculture and oil and gas development.

Though some tribal residents have access to treated water via the Southern Ute Tribe’s municipal treatment system, non-tribal members and others have come to rely on the market.

Hope Vail visits the market twice a week, dropping bread or onions or other incidentals into her basket after she fills her three-gallon jug at the market’s stainless steel filling station, a sort of modern-day communal well that receives its treated water from the Southern Ute’s municipal water system.

She lives outside Ignacio with her partner and her 100-year-old mother.

For a time, the oil company that drilled on her property monitored her groundwater well. But they’ve stopped, and she doesn’t trust that the water is pure enough to drink. “They say it’s safe,” she said. “But you never really know.”

She does trust the water at the market, though, and appreciates the service the Lees provide.

Amos says he doesn’t know how much it costs to provide the water, and he doesn’t feel a need to keep track. “It was just an easy thing for us to do,” he said.

Opened in 2015 by Amos’ brother and sister-in-law, Ezra and Brook Lee, the market sits on Ignacio’s main thoroughfare.

With Ezra and Brook providing the financial backing, an old dilapidated market that sat on the corner was torn down, and the new, 22,000 square-foot grocery was built.

It is a modest but gleaming operation, filled with dozens of orderly shelves standing on spotless, polished concrete floors. In an era where scale and volume are everything, Fresh Farmers Market is roughly one-third the size of the average city grocery store.

That means Amos and crew are continually adjusting inventory, doing away with items such as paper towels and toilet paper that can be bought cheaply online or 40 miles away at the Sam’s Club in Farmington, N.M., and instead offering produce and locally crafted items, such as flour, green chile and hominy. 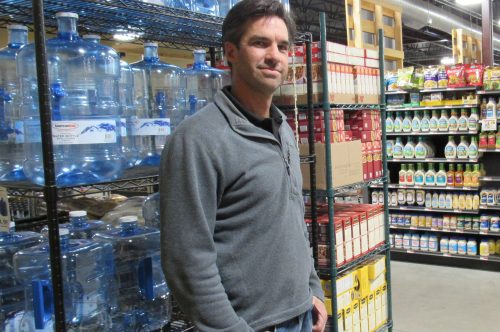 Most small towns any more don’t have a grocery store, let alone one that offers a full-service deli and café, prescriptions and liquor.

To lure shoppers, the Lees focus on creating a gathering place, much like the old market once did. Historical photos of local ranchers and an old grocery store that dates back to the 1880s hang on the walls.

In the summer, it hosts a brisket cook-off as part of the St. Ignacio Festival. In the fall, it offers a green chile festival.

The Lee family advertises the old-school way, using fliers in the local newspaper and promotional spots on the radio. Around meal times, the deli welcomes a steady stream of visitors, its tables often full with farmers, young students from the nearby high school, and oil field workers.

And perhaps most importantly, it offers free water to anyone who needs it.

On this rainy Wednesday afternoon, a half dozen people, husbands and wives, and a 30-something man in a Carhartt jacket and work boots stand patiently waiting to fill their shiny blue containers.

At the front of the store is a long, deep freezer that holds dozens of frozen turkeys. If you buy $100 worth of groceries, the turkey is free.

Thanksgiving is one of Farmers Fresh Market’s biggest sales holidays and it requires almost constant stocking to ensure customers have what they need for the feast.

Amos says the small-town grocery business, though it has its challenges, also delivers the inspiration that comes with helping the residents meet a basic need: food and community.

“In other businesses you might interact with a customer once in a while, but here it is continual,” he said. “What I like best is engaging with the community and helping meet this basic, perpetual need. We all have to eat.”