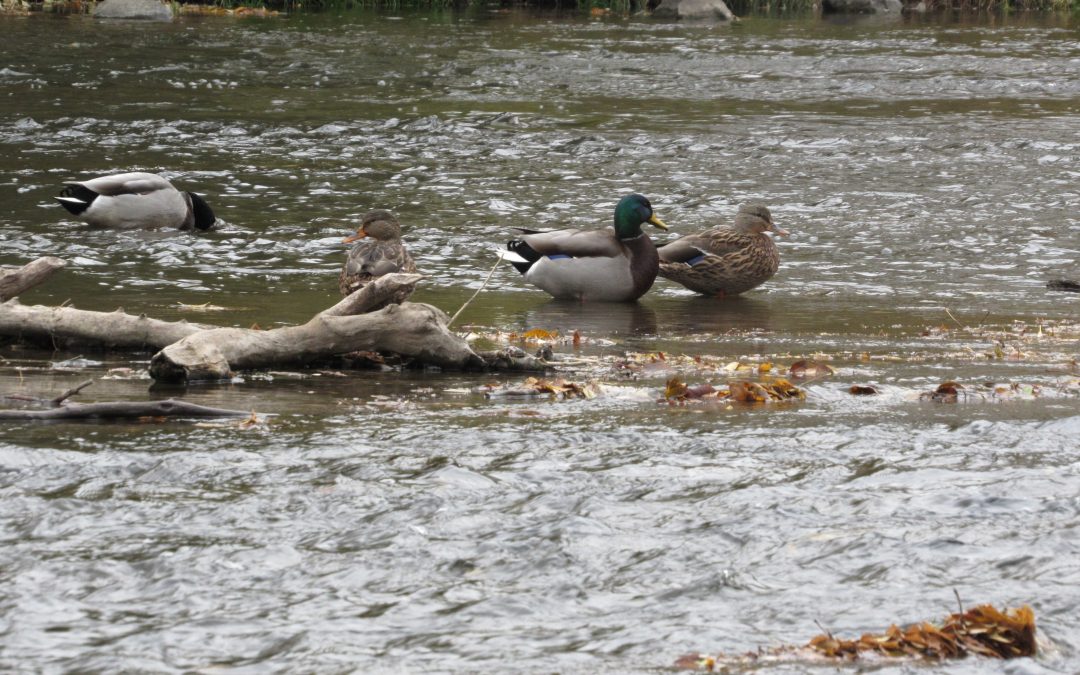 Ducks fish and play on the Overland-Grant Park reach of the South Platte River in Denver. This stretch of the river has been rechannelized to improve habitat for fish and other wildlife. Credit: Jerd Smith

Four Colorado counties next week will ask voters to approve new or to extend existing taxes to preserve land, and to protect and improve waterways.

If all measures are approved, it would mean more than $50 million annually in new funds for these land and water efforts.

“It just demonstrates the importance that rivers and open space and parks have in Colorado,” said Fay Augustyn, American Rivers’ conservation director for the Colorado River Basin. “Counties continue to recognize the importance of protecting this.”

Denver’s Ballot Question 2A asks voters to raise the city and county sales tax .25 percent, or 25 cents on a $100 purchase, with funds dedicated to acquiring and improving park lands and restoration of waterways. If approved it would raise an estimated $45 million annually.

Eagle’s County’s Ballot Question 1A asks voters to extend a 1.5 mill property tax to protect working farms, wildlife habitat, wetlands, floodplains and public access points to rivers and streams. The existing tax generates $4 million to $4.5 million annually, according to Matt Scherr, a backer of the campaign.

Chaffee County Ballot Question 1A is seeking a new sales tax of .25 percent or 2.5 cents on a $10 purchase. If approved the new tax would generate $1.2 million annually, a portion of which would help to protect watersheds in the region.

And in Park County Ballot Question 1A seeks to extend an existing 1 percent sales tax through 2028 and 1B seeks authorization to use those tax dollars to preserve, acquire, lease, improve and maintain water rights, along with water systems and infrastructure, among other items. The existing tax raises $850,000 annually.

“They all take a slightly different angle,” said Gini Pingenot, legislative director at Colorado Counties Inc. Given that nearly one-third of Colorado’s 64 counties are seeking some kind of tax hike, she said it was surprising to see land and water issues landing a spot on the ballot.

“Knowing the amount of stress [counties] are under, I found it intriguing that they would be seeking voter approval for natural resource protection. It probably plays into their recognition that it is part of the lifeblood of their community. Clearly their residents are valuing it,” she said.

Anti-tax forces, however, believe the call for new taxes may be premature. Opponents, of the Denver measure, point out that the city is facing its longest ballot in history with four requests for new taxes, including 2A.

Mike Krause, public affairs director for the Independence Institute in Denver, said the local tax measures are in keeping with Colorado’s TABOR Amendment, which requires local approval of any new taxes. “That’s working the way it should,” he said. But he cautioned that Denver’s 2A, would add unneeded revenues to Denver’s  healthy tax coffers.

“The Denver city budget is already growing faster than inflation and population growth. We see 2A as a way to avoid having to use existing revenue to expand the parks, even though they could do it if they really want to,” Krause said.

Denver City Council President Jolon Clark said he hopes voters give the city the go ahead, in part because Denver is one of the only counties in the state that doesn’t have its own open space tax. And, he said, preserving water is key to protecting other green spaces in the city.

“Forty years ago, the South Platte was largely dead ecologically, but today we have trout that are thriving. If you look at the reach between Overland and Grant Frontier [parks, south of downtown Denver], we were able to re-channelize that whole stretch of the river to create high flow and low flow channels because the water had become so slow moving and wide that it would heat up and kill everything in that stretch. Those are the kinds of projects that 2A will help fund,“ Clark said.

The tax questions come as Colorado water officials are researching how best to raise money to help implement the state’s water plan, an effort with a price tag of roughly $20 billion. The money would help create water conservation programs, environmental programs and some water storage projects to stave off future shortages.

Whether these initiatives will serve as an indicator of voters’ willingness to fund bigger projects isn’t clear. Pingenot said counties, traditionally, are much better at convincing residents to tax themselves to reach community goals. Statewide taxing questions are a tougher sell.

“We will know more after November,” Pingenot said. “But I think it is probably instructive for the legislature to observe the sentiment and the desire by communities to protect their resources.”

The idea of asking local residents to pay up to protect regional watersheds isn’t new. In 2003, the state approved the Colorado Healthy Rivers Fund income-tax check-off. After falling into dormancy, it came back in 2016 and was broadened to accept non-income tax related donations. To date the fund has raised nearly $1.5 million, according to Casey Davenhill, executive director of the Colorado Watershed Assembly, which administers the fund.

But it is Pitkin County that has created the most far-reaching watershed tax. In 2008, voters approved the Pitkin County Healthy Rivers Fund, which has generated $8 million for water projects. To date, it has helped build a recreational in-channel diversion on the Roaring Fork River, among dozens of other projects.

“We always thought other counties would join in but it has been slow,” he said. “It’s nice to see other people joining us now.”