It was a squeaker, but Colorado voters say yes to sports betting, cash for state’s water plan 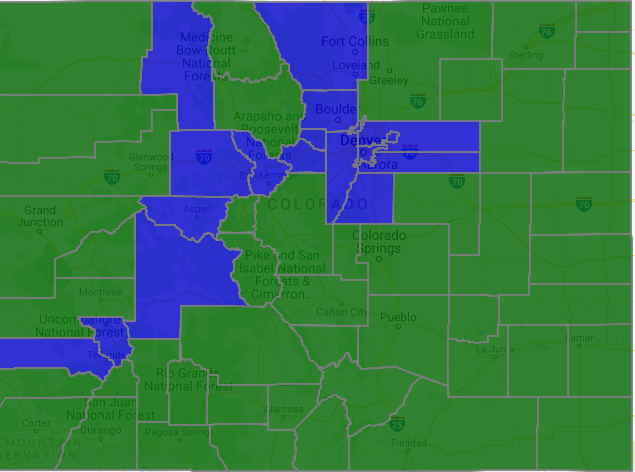 The vote is a major victory for the bi-partisan coalition that backed the measure and represents the first voter-approved effort to fund the four-year-old Colorado Water Plan.

The nail-biter margins, 1.5 percent at press time, provide a cautionary tale on how much support exists for water funding and how much more will be needed in the future, backers said.

“I was surprised. It was super close,” said Alec Garnett, D-Denver, the lead sponsor of the bill that referred Proposition DD, as it was known, to voters. “But it’s a reminder to everyone that Colorado is a fiscally conservative state.”

Proposition DD legalizes sports betting and imposes a 10 percent tax on casino revenue derived from this new form of gambling. A statewide map of the vote count showed voters on the Front Range and in ski counties, such as Eagle, Summit and Ouray, had the most enthusiasm for the measure, while rural counties on the West Slope and Eastern Plains rejected it.

Garnett said he was proud of the consensus on water demonstrated by the win, and the power of the bi-partisan coalition of politicians, environmentalists, water utilities, and agriculture groups that came together to back the campaign.

“Any legislator will say, ‘You’re electing me to go in to help solve problems and bring people together,’ and I’m proud of how we did that here,” he said.

The vote sends an important signal to lawmakers and others, according to political pollster Floyd Ciruli.

“There is no better conversation to have than a ballot issue. You get everyone’s attention. This vote shows people do believe water is important and that this is a good way to [fund] it,” Ciruli said.

Sen. Jerry Sonnenberg, R-Sterling, opposed the measure and said he remains concerned that there isn’t enough transparency in how the money will be managed and that it is improper to use a so-called “sin tax” to pay for something as fundamental as water resources.

“Water is such an important issue we should pay for it out of the general fund or out of severance taxes,” Sonnenberg said, adding that he will continue to fight in the Legislature to ensure the money is used for the water plan.

Estimated to total between $12 million to $29 million annually, the sports-betting tax money will flow into a new fund overseen by the Colorado Water Conservation Board (CWCB). It could be used for a variety of purposes, including water-saving programs for cities and farms, habitat restoration programs, storage projects, land use planning, and environmental water supplies for water-short streams.

Since 2015, the CWCB has financed the water plan using income derived from severance taxes, the state’s general fund, and other sources. Those amounts have varied widely, with the state setting aside $30 million this year, up from $5 million in 2015, according to the CWCB.

Backers characterize DD as a valuable down payment on the water plan. Assuming the tax is able to eventually generate $29 million a year, that’s still less than one-third of the $100 million a year the state has previously estimated it will take to protect scarce water resources and to prevent future water shortages.

This year, another group emerged whose intent is to raise additional money for the water plan. For The Love of Colorado, backed by the Walton Family Foundation (also a funder of Fresh Water News) and the Gates Family Foundation, is preparing to run a large public awareness campaign about the critical nature of the state’s water challenges and the need for funding.

“It’s great that voters did this. But I need to emphasize it’s literally only a drop in the bucket. And even though it passed, it barely passed. We have more work to do.”

David Nickum, executive director of Colorado Trout Unlimited, said he hopes Prop DD will stimulate environmental and water conservation programs, much like Great Outdoors Colorado has. GOCO is the 1992 ballot initiative that has helped preserve hundreds of thousands of acres of historical ranches and open space across Colorado, protecting them from development. It is funded with state lottery proceeds.

“We’re pleased that Colorado voters are making a decision to invest in our resources, using the water plan as a road map for that,” Nickum said.

“Hopefully it will lead to a proliferation of projects, much like GOCO did,” he said.