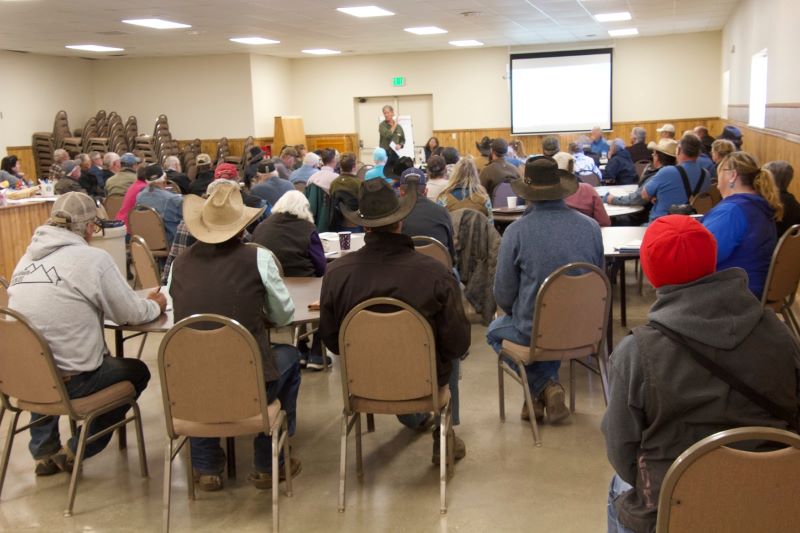 Ranchers and other water users gather at a stakeholder meeting in North Park on Oct. 22 to ask questions and provide input as state officials make case for measuring devices and recording. Credit: Allen Best

As the gap between water supplies and demands narrows in northwestern Colorado, state officials want to ensure that, as best as reasonably can be done, every last drop gets measured and recorded.

They made their case to about 60 ranchers in North Park’s Walden, Colo., on Friday in the fifth of six stakeholder meetings during October that will conclude tonight with a meeting in Craig.

The proposed rules governing the Yampa, White and North Platte River basins would require that headgates, which allow water diversions into ditches, be supplemented with measuring infrastructure, either flumes or weirs, to track the amount of water being diverted. The rules would also institute protocols for reporting the measurements, for collection in state databases. Authority to require the measuring and reporting is clearly defined by state law, but the law leaves room for discretion about the particulars, hence the stakeholder process.

In an already drought-stricken region likely to become hotter and drier yet in the 21st century, those measurements will become ever-more important in administering water rights. The Yampa River this century has carried on average 6% less water than it did during the 20th century. On the White River, flows have fallen 19%.

Already, there is concern that Colorado will be forced to curtail diversions of water rights dated later than the 1922 Colorado River Compact if the aridification of the Colorado River Basin continues, said Kevin Rein, the state water engineer, at the outset of the meeting in Walden.

The compact specifies that Colorado along with Wyoming, Utah and New Mexico “will not cause the flow of the river” at Lee Ferry, at the top of the Grand Canyon, “to be depleted below an aggregate” of 75 million-acre feet for any period of 10 consecutive years. Colorado and the three other upper basin states are in relatively good shape—for at least the next couple of years. In the last decade, 92 million acre-feet have flowed past Lee Ferry toward Arizona, Nevada, California and, eventually, Mexico. 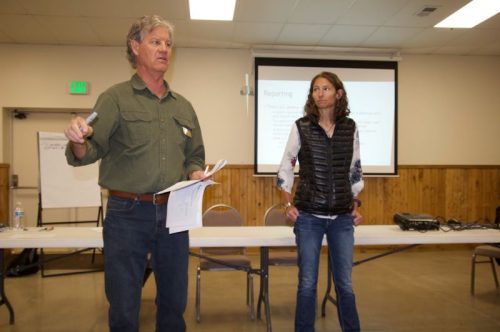 Kevin Rein, Colorado state water engineer, explains why Colorado needs stepped-up measuring of water diversions in the North Park and other rivers in Northwest Colorado while Erin Light, Division 6 engineer, looks on during a meeting in Walden on Oct. 22. Credit: Allen Best

But if below-average becomes the new normal, as climate scientists warn almost certainly will be the case, Colorado may be forced to defend its diversions in light of the compact. “When they come in and ask for water, we can’t refuse if we have no data,” said Mike Sullivan, the deputy state water engineer.

The state water officials pointed to the Aug. 2021 report Lessons Learned from Colorado Experiences with Interstate Compact Administration issued by the Hutchins Water Center at Colorado Mesa University and MacIlroy Research and Consulting. “Confronting the limits of a water supply is a painful experience,” the report said after studying the Republican, Arkansas and Rio Grande basins. “Across each of the basins, earlier action to address potential compact and supply issues has enhanced the control communities have to develop and choose their own, less painful, options.”

The North Platte River does not flow into the Colorado River. It’s east of the Continental Divide but separated from the Front Range by the Medicine Bow and other mountain ranges. So why the need to measure water in North Park the same as in the Yampa and White river valleys?

Because it’s good to have the data should it be necessary as required by other interstate agreements, in this case involving Wyoming and Nebraska, said Sullivan.

But there’s another reason for more rigorous accounting of diversions, said the state water officials. Owners of water rights can best look out after their own interests by documenting their water use. This guards against those rights being placed on lists of abandoned water rights that state law requires be issued every 10 years. The most recent list for all river basins, including North Park, was issued last year.

Measuring devices also give those with more senior water appropriations the right to divert their legal entitlements in water-scarce years. And in the case of land sales with connected water rights, it gives owners the proof of water use to demonstrate value to potential purchasers.

In several river basins in Colorado, notably those east of the Continental Divide, measurements became crucial as early as the 19th century. In those river basins where water users experienced an earlier squeeze between supplies and demands, those with senior water rights began placing calls that required those with newer—and hence more junior— rights upstream to cease or cut back diversions.

In Water Division 6, which includes the North Platte, Yampa and White river basins, 54% of headgates had appropriate measuring devices as of April. This compares with upwards of 90% in several other water divisions of Colorado.

Overlapping the new rules is a proposal being considered by the Colorado Division of Water Resources to designate the Yampa River as over-appropriated. Most rivers in the state are already considered over-appropriated, in some cases over a century ago. Segments of the Yampa—including the river upstream from Steamboat Springs and several tributaries—already have been so designated. This designation will require irrigators drilling wells to have water that they can use to augment streamflows if there is a call on the river by a senior user. Improved measuring will assist in administration. Meetings to gather input were scheduled for Monday night in Craig and Thursday night in Hayden.

State officials hope to get the measurement rulemaking as well as the Yampa designation completed by early next year. Rules will be unique to the needs of Northwest Colorado, just as rules governing the Republican and Arkansas River basins are unique to the interstate water agreements and other circumstances governing water use in those basins.

North Park was particularly warm and dry last winter. One rancher after the Walden meeting recalled that it was possible to drive across his hay meadows all of last winter whereas many years he has to plow the driveway almost daily.

“It was pathetic, really,” said Keith Holsinger, standing on a bridge over the Michigan River east of Walden where he grows hay on 800 acres. One of his neighbors, who usually gets 500 to 600 tons of hay, got only 90 tons this year, he reported.

Holsinger has lived on the ranch all of his 77 years. His water rights range from among the oldest in North Park, an 1885 decree with a priority number of 32, to more junior rights of 240th in priority.

He remembers putting in the first measuring device sometime after the drought of 1977. His last device, a weir, he had installed last year. 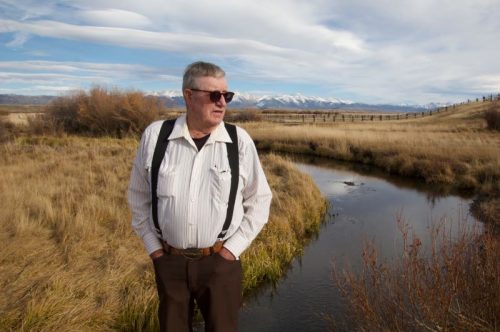 Keith Holsinger has been installing measuring devices on ditches for his ranch along the Michigan River in North Park for several decades. Credit: Allen Best

During the meeting, some skepticism was voiced about the coming measurement rules. State representatives characterized the relationship between water users and state authorities as one of cooperation and trust.  But one audience member pushed back. Implementation seemed to be discretionary, he said. “It’s a trust issue, and I’m sorry to say I don’t have a lot of faith.”

But as for the need for the rules, Holsinger is already persuaded. “If it’s free water in priority, if you want that water, you had better have a headgate and weir,” he said. “It’s as simple as that.”

The most significant discontent voiced in the background of the meeting agenda was about the high turnover in water commissioners. It’s a common problem across Colorado, say state water officials, as the job is by nature semi-seasonal. But in conversations after the meeting, North Park residents suggested that if the state wants water users to be partners in administration, the state needs to allow proper resources. A water commissioner has between 350 and 500 headgates to check, and there’s a learning curve.

“In 20-some years, I have probably ordered a half-dozen headgates locked,” said Sullivan. “If we can’t get someone to keep their hands out of the cookie jar, we lock the cookie jar.”

As for the specific type of weir or flume, there are several formal varieties as well as less formal ones. They can be expensive, but none of the irrigators in Walden indicated that cost alone is an issue. Erin Light, the Steamboat Springs-based water engineer for Division 6, said she had seen a flume made of a road sign. It worked, she reported. Sullivan reported seeing one made of rock that worked effectively.

Said Sullivan, speaking to people mostly old enough to remember a bestselling small-model car in 1979 and 1980, “We don’t want to require a gold-plated Cadillac headgate when a Chevette will do.”