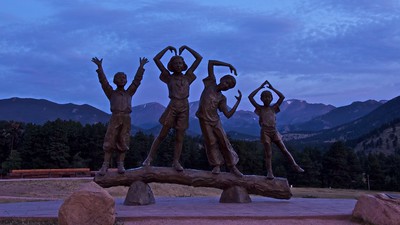 Statue at YMCA of the Rockies: Wikipedia Creative Commons

Sometimes, when you’re a small nonprofit, the high price of water is a good thing.

The YMCA of the Rockies, an historic Estes Park resort founded more than 100 years ago, has entered into a multimillion-dollar agreement with the Town of Estes Park in which it will transfer water rights valued at roughly $1.9 million to the town, in exchange for a perpetual water treatment contract.

Chris Jorgensen, the YMCA’s chief financial officer, said the agreement allows the resort to forego the high cost of building a modern water treatment plant and gives Estes Park a more robust water portfolio and delivery system that has better economies of scale.

“The cool thing about it is the collaborative nature of it,” Jorgensen said. “Our existing plant is within a mile of theirs. We’re going to go from operating two water plants to one. It speaks to good stewardship of our natural resources, and it benefits both of us.”

The YMCA has 312 shares in the federally owned Colorado-Big Thompson (C-BT) Project water system, according to the Northern Colorado Water Conservancy District, which manages the C-BT Project. Flowing straight from the Alba B. Adams Tunnel under the Continental Divide from Grand Lake to the Front Range, the water is among the most highly valued in Colorado. Clean and easily delivered and traded, its value has skyrocketed in recent years.

Under the agreement, the YMCA is transferring 32 shares of its C-BT water to the Town of Estes Park. According to Northern Water, the value of the water varies, but recent sales have been priced at $60,000 to $65,000 per share. Just four years ago the price was closer to $30,000 per share.

That puts the water value of the deal at $1.9M with the YMCA also agreeing to pay the town $1 million over the next 10 years in system development charges.

“The town sees it as a civic duty,” Bergsten said.

What the YMCA plans to do with its remaining water rights isn’t clear yet. Jorgensen declined to comment on any other potential sales, but said the resort’s water portfolio is being used fully now to serve customers.

And Jorgensen said the value of the water isn’t the most important piece of the transaction.

“It’s a tremendous relief to be out of the water treatment business,” he said. “Now we can maximize the value of our business for our guests.”