Despite a stubborn, 20-year drought and reservoirs whose supplies are below normal, Colorado communities remain split on whether to impose permanent outdoor watering restrictions, according to a Fresh Water News analysis of local watering rules.

According to the analysis, which examined rules in 15 cities representing the state’s different geographies and major population centers, eight of the cities surveyed have enacted permanent restrictions. Seven cities have not, opting instead to enact variable, temporary watering rules each year.

But when communities do impose permanent rules, rather than adjusting them each spring depending on snowpack and reservoir levels, significant savings occur, with some communities seeing reductions of more than 40 percent in peak summer water demand, according to a recent study by Alliance for Water Efficiency, a nonprofit representing water and wastewater utilities across North America. 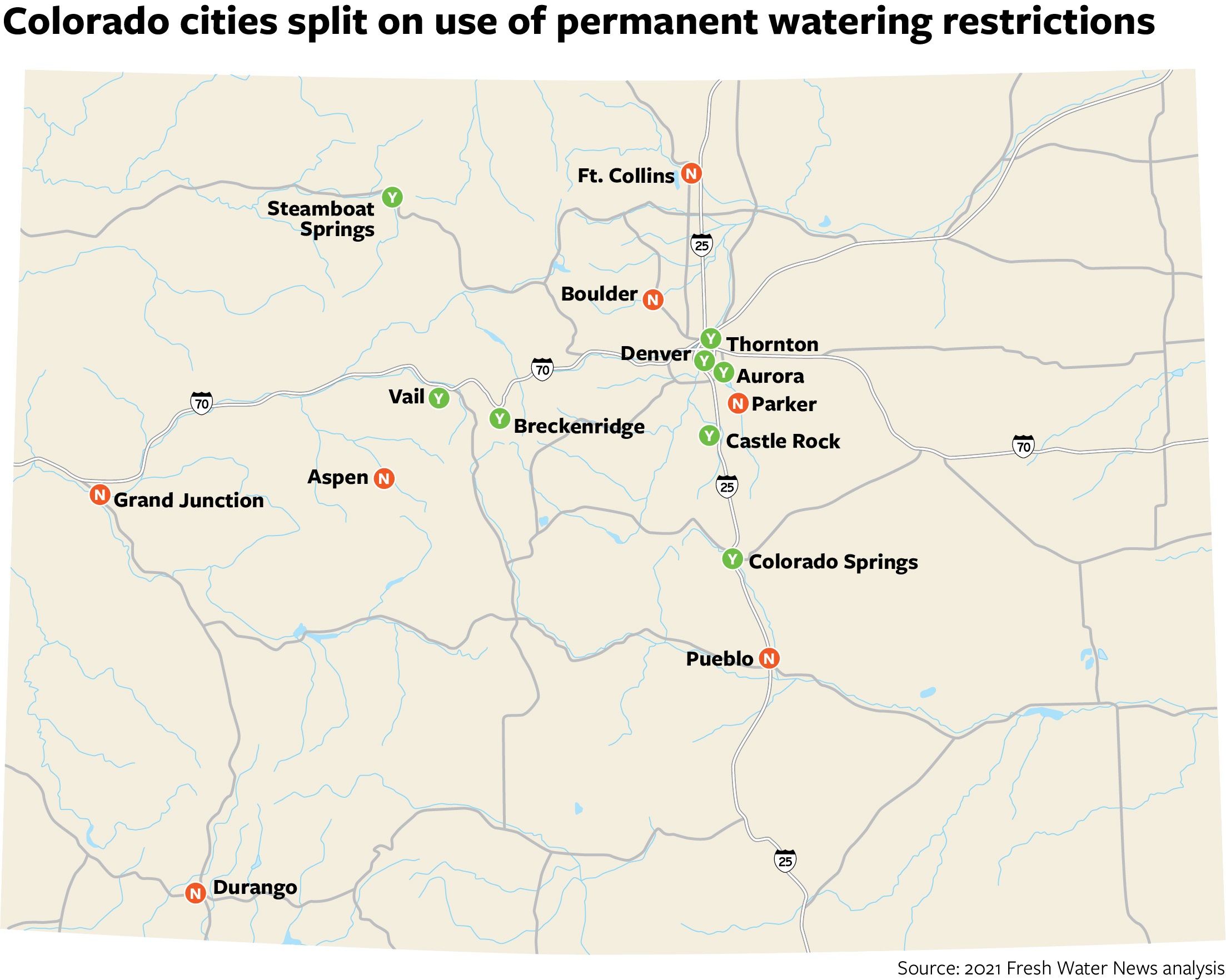 Those kinds of statistics helped Steamboat Springs last spring make the move to permanent water restrictions. Steamboat limits customers to watering their lawns three days per week based on the last digit of their address — even numbers can water on Sundays, Tuesdays and Fridays, while odd numbers can water on Mondays, Thursdays and Saturdays. The new rules also limit outdoor watering to between 6 p.m. and 10 a.m.

After years of variable outdoor watering rules that fluctuated depending on drought conditions, Steamboat Springs residents embraced the new permanent schedule right away, according to Kelly Romero-Heaney, the city’s former water resource manager who earlier this month became Assistant Director for Water at the Department of Natural Resources.

“Coloradans are ready to take this step,” said Romero-Heaney. “There really is no reason to water irrigated sod every day, unless it’s getting heavy use like you would see at a soccer field or a community park. It just makes perfect sense. We also recognize that it’s not fair for us to say to the Front Range utilities, ‘You need to conserve more, you need to conserve more, that’s your problem,’ if we’re not conserving ourselves. We wanted to lead by example.”

For its permanent watering rules, Steamboat Springs drew inspiration from the handful of other Colorado cities — both on the Front Range and in the mountains — that have made outdoor watering rules the norm, instead of the exception.

Some city and utility leaders say the watering rules help residents to permanently change their outdoor watering behaviors, given the aridification of the West and the accelerating pace of climate change. Others continue to monitor drought conditions throughout the summer months and adjust their watering rules depending on the current severity.

“You can’t prescribe a blanket strategy across every water provider typically,” said Bill Christiansen, director of programs for the Alliance for Water Efficiency. “It’s not fair to say a certain strategy would work for every water provider. You have to do what makes sense for your area.”

In the broadest sense, watering rules — both permanent and temporary — help utilities manage peak demand, the period of time when water use is the highest. In most communities, peak demand occurs during the summer, when residential and commercial customers water their lawns and gardens. These rules help ensure that utilities have enough supply to meet the needs of their customers. During drought, when water supply is low, many communities enact or tighten watering rules to help lower the demand for water.

“Outdoor water use can often represent a very large percentage of a water provider’s portfolio, and the capacity of a system is built to meet peak water use,” Christiansen said. “If outdoor water use can be reduced, it can be a very effective way to reduce water consumption. It can also be very helpful if a community is facing the need to expand their capacity — they can lower that peak and avoid or downsize any capacity or expansion projects. That can save ratepayers a lot of money if a large investment can be avoided.”

“Increasing rates is often the most effective tool for achieving water savings,” according to the study.

Some growing Colorado cities view permanent watering rules and other conservation measures as a “new” source of water, because these measures help buy them more time before they have to seek out other, often costly new water supplies in advance of future development.

That’s been the case for Aurora since 2002, when the city first enacted its permanent rules limiting residents to watering no more than three days a week and, from May 1 to Sept. 30, to watering before 10 a.m. and after 6 p.m.

But watering rules are just one piece of the puzzle in Aurora. The city also has a tiered rate structure, enforcement measures for violators and many financial incentives for water-conserving landscaping and devices; Aurora also re-uses much of its water through its innovative Prairie Waters system. These and other conservation efforts appear to be working, too. Since the early 2000s, Aurora’s water use has declined 36 percent, resulting in some of the lowest per-person water use on the Front Range.

“Aurora is not fully developed,” said Marshall Brown, general manager of Aurora Water. “We’ve got water supplies that are conservatively or easily able to meet the demand of our existing population. But we do have to continue to acquire supplies to meet future growth and demands that we know are coming our way. So with that, probably the easiest water supply we have is to extend our existing supplies. That’s the least costly option for us.”

Other city leaders view permanent watering rules as a way to change their residents’ and businesses’ behaviors. Instead of flip-flopping between various watering schedules and rules throughout the summer, residents simply adapt to the new norm and move forward.

That was one big reason Thornton adopted permanent watering rules in March, where watering is limited to three days per week between 6 p.m. and 10 a.m. At the same time, the city also updated its code to include beefed-up enforcement measures for leaks and other water-wasting behaviors.

“Planning for drought is one thing — we’ve got these short-term strategies where we reduce demand or grab extra water, but one of the real strains on all of our systems is the aridification of the region,” said Emily Hunt, deputy infrastructure director for Thornton Water, which also has a tiered rate structure and various water-wise incentive programs. “We’re becoming progressively drier and warmer and that’s a challenge to plan for. We have to be able to rely on consistent behavior change from our customers and just a consistent ethic and not this, ‘Oh, we’re in a drought we’re in an emergency,’ like the crash-dieting approach. We need more of a sustained nutrition approach.”

“We started communication on May 1 and by the first week in July, we could see by usage that the majority of our customers were all watering no more than three days a week, which was really encouraging,” Gallucci said.

In the first year under the new rules, Colorado Springs saw a 1 percent reduction in commercial irrigation and a 4 percent to 5 percent reduction in residential irrigation, Gallucci said. Those initial numbers were right on target with the city’s goal of contributing 11,000 to 13,000 acre-feet to its supply through conservation over the next 50 years through the watering rules and other measures.

“This is one of the best ways to implement a water conservation ethic across the community, because instead of being really mindful of drought in drought years, we’re mindful of it year after year,” Gallucci said. “Unlike drought response, when you’re trying to manage a dearth in water supply for a shorter period of time, these are planning well out into our future. It was kind of amazing how quickly and supportively our community responded to our water-wise rules last year.”

Of course, if cities are conserving water for future use, they need to have somewhere to store it, Gallucci pointed out. Water storage projects can be expensive and unpopular among some residents, but they’re an important piece of the equation.

“Conservation can only contribute so much to supply,” Gallucci said. “If you use none, you’ll have all of that to use later. But when you curb your water use by 5 percent each year, you have to have the storage to keep that additional water to use later on. Conservation and storage is this really careful and important balance in Colorado. Every large provider is considering different ways to expand their storage as a form of taking care of their supply.”

That’s the main reason Durango has not enacted permanent watering rules, according to Jarrod Biggs, the city’s assistant utilities director.

“We did a pretty thorough and thoughtful evaluation of this when we were developing our drought management plan,” Biggs said. “It seems like a rational exercise, it drives conservation. But we’re a surface supply city, we don’t have significant reservoir space to speak of and so if we enact watering restrictions, we’re just letting the water go by us. There’s the old adage that canals move water in space and reservoirs move water in time. We don’t have enough of that time machine in the City of Durango and we’ve built our policies around that.”

That’s not to say that Durango encourages residents to use water needlessly. In fact, the city has some “pretty punitive” tiered pricing for heavy users, Biggs pointed out. In the meantime, Biggs is pursuing other ways to boost supply in Durango, including using water from Lake Nighthorse, part of the Animas-La Plata Project.

“I’ve got a two-pronged approach,” Biggs said. “Let’s push and strive and discuss and encourage conservation because that will push out the investment that we need to make in additional water supplies, but at the same time, let’s pursue those investments in water supplies because we know they’ll only be more expensive in the future.”

The City of Boulder also continues to make outdoor watering decisions each spring, looking at drought indicators and the city’s water supply status after May 1. Instead of permanent watering rules, the city relies on tiered water prices, customized water budgets for customers, and incentives and education to encourage conservation.

“So far, while current conditions are drier than normal, our snowpack and reservoir levels are looking sufficient enough to not require restrictions,” said Kim Hutton, Boulder’s water resources manager. Still, she said, “Due to drier conditions, we continue to encourage water customers to use water efficiently.”

Since Colorado communities are at different points in their water conservation journey and are facing their own unique challenges, the path forward will look different for every city.

Some communities are installing automated metering infrastructure systems, which they hope will help water users track and better manage their water use in real-time. Others are providing grants to homeowners’ associations and working with developers to encourage more water-friendly landscaping in neighborhoods.

But according to conservation experts, even those cities with the most robust water-saving initiatives underway must keep working, as a good water year here and there isn’t likely to alleviate the West’s long-term drought.

“All the strategies we have at our disposal for water conservation and efficiency fall along a spectrum,” says Waverly Klaw, director of resilient communities and watersheds for the Sonoran Institute, a Tucson-based conservation organization. “It’s important to keep moving in the same direction of greater and greater water savings. Some communities might have permanent watering schedules and that’s great, and that will save them a certain amount of water, but they should continue to look forward and look at additional opportunities and strategies to go beyond that. One tool or strategy doesn’t solve the whole problem.”