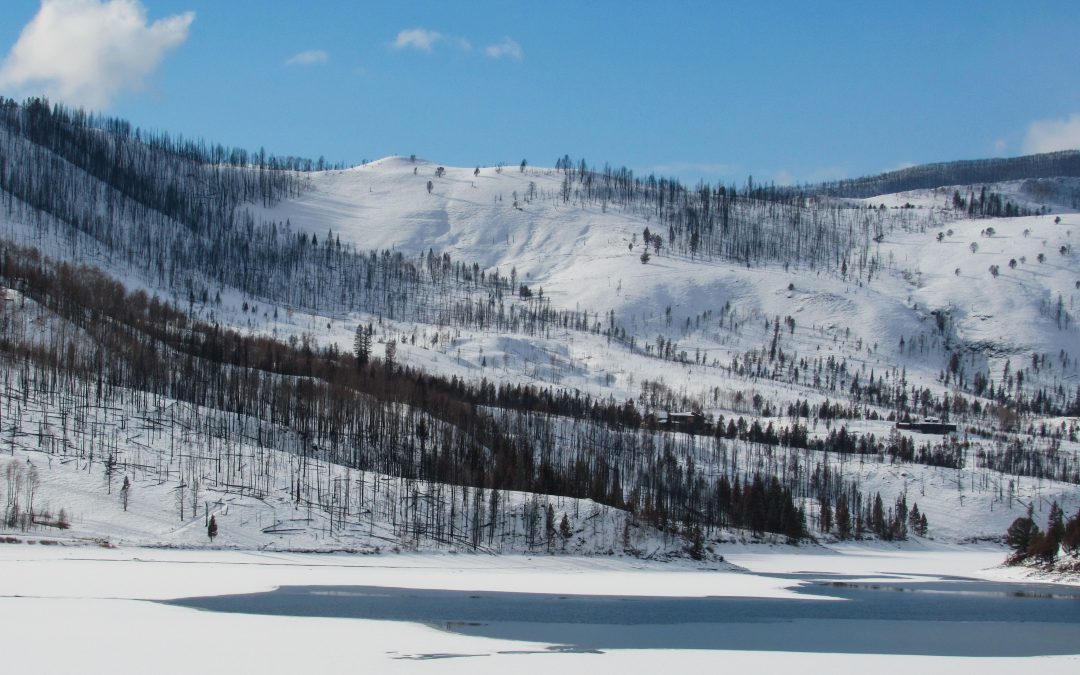 Craig Friar and Steve Anderson had seen wildfires smolder and flare before. But they had never seen one run.

Until Oct. 21 when Grand County’s East Troublesome fire sprinted 17 miles in less than three hours, threatening to engulf communities across the county and giving these Northern Water staffers and others just hours to decide how best to move the water agency’s operations center out of Grand County and over to Northern’s emergency operations center in Berthoud, on Colorado’s Front Range.

It was uncharted territory. The backup center had never been used before.

Northern Water is the largest exporter of water from Colorado’s West Slope to the Front Range, serving farms and dozens of cities from Broomfield and Lafayette to Boulder, Loveland and Greeley.

As dark, fire-stained clouds billowed over the towns of Granby and Grand Lake that day, Northern’s West Slope team grabbed operation logs from the Farr pumping plant on the banks of Lake Granby. They tracked down the half dozen or so mechanics, electricians and operators who would need to make quick exits, and figured out how to ferry everyone to safety over the Continental Divide. 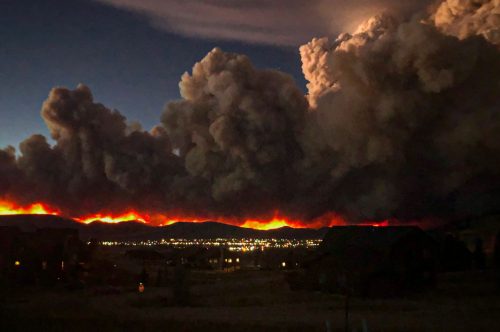 Initially they hoped to keep most of their operators on the West Slope by moving the temporary command center farther West to another Northern operations site. But the East Troublesome Fire, already known for its cranky, unpredictable nature, changed direction, blocking access to the local site.

“Those [plans] quickly went away,” said Friar, who oversees the utility’s collection system. “When things blew up on Tuesday, we said, ‘Scrap that.’ Wednesday we had a call and began moving everyone over to Berthoud.”

West Slope staff who weren’t evacuated offered trailers to those who had been, hauling household goods and horses. They tracked down housing for co-workers who feared their homes had burned.

They had dozens of calls with the U.S. Bureau of Reclamation, which owns Northern’s system, as well as emergency managers with the U.S. and Colorado State forest services and the Grand County fire and sheriff departments, and county emergency response teams.

Hundreds of homes and structures in Grand County were threatened or destroyed, and the lakes and reservoirs there that comprise Northern’s water collection system faced the same fate. The agency serves more than 1 million people on the Front Range.

Since mid-August, Northern’s team had watched the Cameron Peak Fire burning in Rocky Mountain National Park just to the north of Grand County, threatening some of Northern’s customers and watersheds, but not the heart of its collection system.

When East Troublesome exploded eight weeks later, the water utility found itself suddenly squeezed between what have now become Colorado’s two largest wildfires in recorded history, with Cameron Peak consuming 209,000 acres and East Troublesome 194,000, before both were declared contained in November. 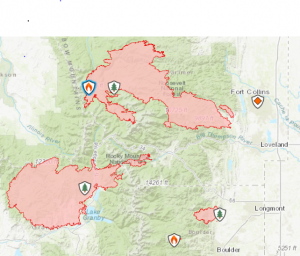 The Colorado Big Thompson Project, which Northern Water operates for the U.S. Bureau of Reclamation, lies between the Cameron Peak fire, shown at the top of the map, and the East Troublesome Fire, shown at the bottom left. Credit: U.S. Forest Service

“It was worse than any worst-case scenario we had,” said Northern’s Environmental Services Manager Esther Vincent during a debriefing with the utility’s customers and others post-fire. 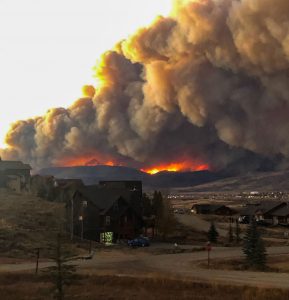 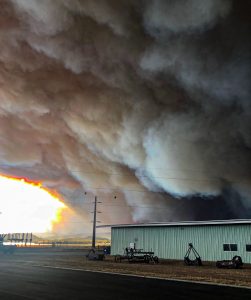 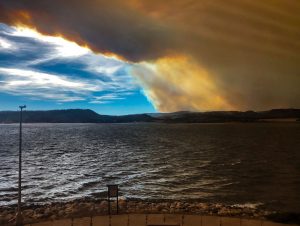 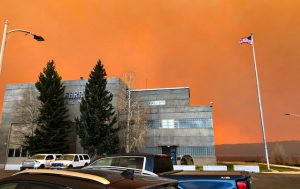 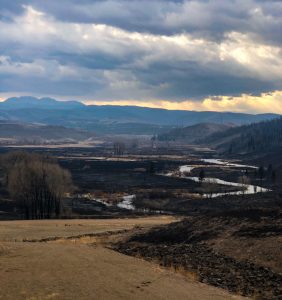 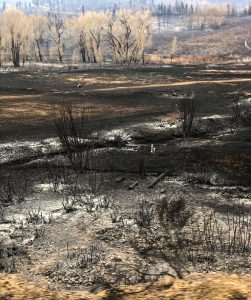 Water infrastructure in the West is often built in high-altitude mountain ranges in order to collect the winter snows that fall and melt into streams.

For years, Colorado and other Western States have planned for and dealt with wildfires and their aftermath: the scorched soils and trees that clog their delivery systems, fill their reservoirs with eroded soils, and cloud their once-pristine water supplies.

But the situation now is much worse. As climate change and searing droughts have dried out the forests that blanket these watersheds, impossibly large, so-called megafires are becoming the dangerous new norm.

These fires devastated California over the summer and the same phenomenon struck Colorado in the fall.

That Northern Water found itself stranded between the two fires in hurricane-force winds was something no one had ever envisioned. There was a sense of awful wonder, amid all the emergency phone calls and late-night planning sessions, at the sheer size of the disaster.

There was also plenty of worry. Early on, as the fire raged, Northern staffers knew power to the Farr Pump Plant would be cut off in order to keep firefighters safe from exploding transformers, falling power poles and downed electric lines. 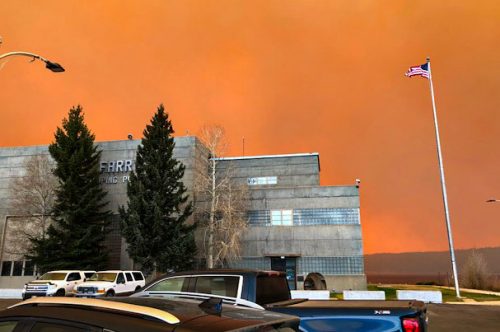 The pumping plant lies almost entirely below the surface of Lake Granby. Without power to run its dewatering system, the plant would flood.

But there would be an even bigger problem once the electricity was cut. The Adams Tunnel takes water pumped from Lake Granby to Grand Lake and pipes it under the Continental Divide to the Front Range. If they couldn’t get the Adams Tunnel shut down before the power went off, it would continue to deliver water, dramatically lowering Grand Lake in violation of federal law, something that would trigger an environmental, legal and political firestorm.

The prospect of such an event is unfathomable, Friar said. “I don’t know what would happen. And I don’t want to know. We don’t even go there.”

They moved quickly to get to the controls that operate the tunnel, successfully closing it down.

For days afterward, they would rotate the chore of going into the silent pumping plant, filling its generators with diesel fuel and checking to make sure the dewatering system was still working.

Roads in and out of the area remained closed and it took close coordination with the Grand County Fire Department and sheriff for Northern staffers to get past the fire barricades.

“We had to make sure we could get in, get what we needed done, and get out of there,” Friar said.

If there was any comfort during the tense, fast-changing days that the fires ruled Larimer and Grand counties, it was seeing local residents pulling out clothes and food for those in need, offering up spare rooms, spare trucks and trailers, and extra flash lights, snow plows and generators.

“I don’t think anyone up here ever felt alone,” Friar said.

December has delivered more elegant white snows to Grand and Larimer counties since October, when the first winter storm calmed the fires. The white slopes, covered with charred forests that are now stark and black, are a welcome respite from the gray smoke and flames that enveloped the area just a few weeks ago.

Friar and others know they have four short months, the time until winter snows melt, to engineer and put into action a high-stakes rescue plan for the devastated watersheds and reservoirs.

Roughly 30 percent to 80 percent of Northern’s four major watersheds have burned, they estimate. Cleaning them up and protecting the lakes from the debris that is sure to come after the snow melts next spring will take one to three years of “acute” work, fire officials said, and decades of additional treatment, a process so expensive that Northern hasn’t yet put a number to it. 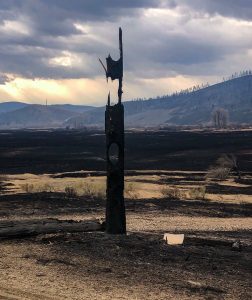 A tree charred in the East Troublesome Fire in Grand County in October 2020. Credit: Northern Water

Denver Water, the only utility larger than Northern in Colorado, battled two smaller—but still epic—fires within the past three decades: the 1996 Buffalo Creek Fire and the 2002 Hayman Fire, which until this year had been the state’s largest. They spent $28 million cleaning up and restoring reservoirs in the first 10 post-fire years and continue to spend millions annually planting trees and doing erosion control, according to Christina Burri, a watershed scientist with Denver Water.

Northern’s Greg Dewey will oversee the fire restoration work. The prospect, he said, is daunting.

“For years we’ve planned for treatments [for the overgrown forests already decimated by pine beetles]. And the ultimate treatment is a wildfire, but I don’t think anyone could have gauged the extent of this,” he said.

The Cameron Peak and East Troublesome megafires have blazed permanent images in the minds of people across Grand and Larimer counties.

What Anderson remembers most now is returning to his Granby home when the evacuation orders were finally lifted. There, he and his family encountered a strange sight:

The house was unharmed, but the front door stood wide open.

As they walked warily up the front steps the first thing they heard was the fire alarm, issuing one piercing screech after another, providing a crazy, haunting reminder of those days in October, when two megafires ruled the skies, the forests and their lives.