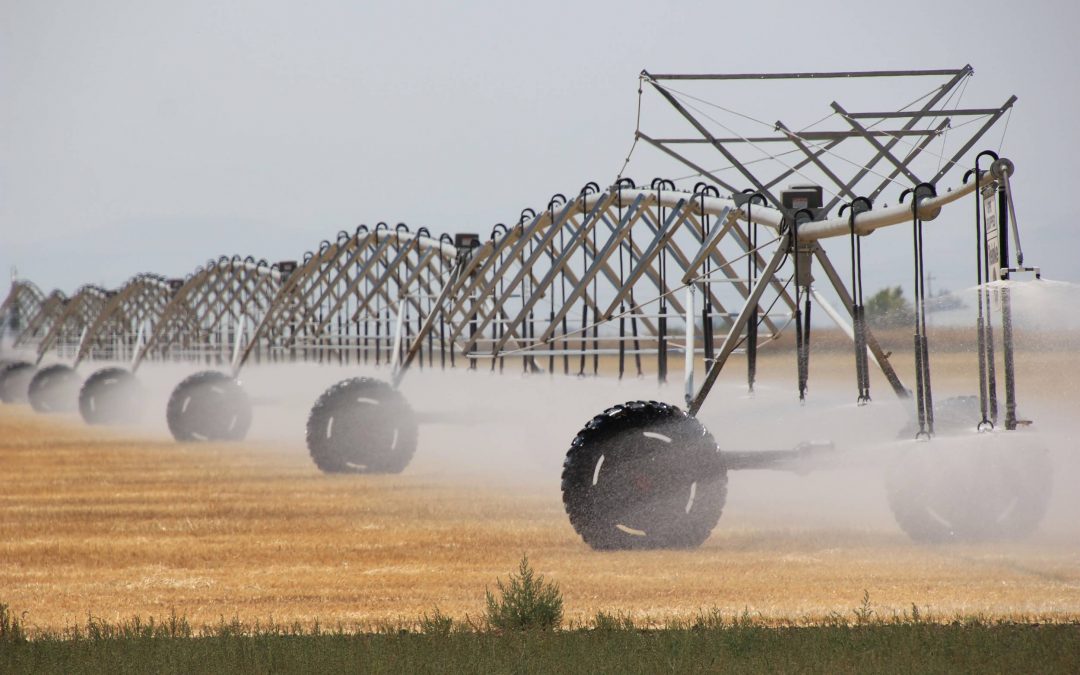 A farmer uses a center pivot to battle drought on a field in Center, Colo., in the San Luis Valley on Aug. 24, 2020. A plan to export water from the valley was one of the reasons the state and some water interests are examining whether Colorado needs to strengthen existing anti-speculation laws. Credit: Allen Best

Expect legislation next winter in the Colorado General Assembly that would seek to curb potential speculation in Colorado water. But whether water speculation actually poses a problem remains hotly debated.

A report released Aug. 13 by a state work group charged with studying how to strengthen Colorado anti-water-speculation law identifies eight concepts to thwart possible water hoarding that should be studied further.

One would eliminate or reduce the agricultural tax benefit for lands from which water is removed following a water rights purchase and transfer. Another would fund or create a right of first refusal for the purchase of water rights for long-term irrigation use for public benefit. Still another idea is to establish a maximum rate of water right price increase and impose higher taxes when that is exceeded.

The report delivers no recommendations to legislators.

“This is such a complex and controversial issue that we don’t have a recommendation—and that is OK,” said Joe Frank, general manager of the Lower South Platte Water Conservancy District and one of the 22 work group members. “I think people will have to dig further into this.”

Don Coram, R-Montrose, said he’s dissatisfied with the report and plans to introduce legislation that would broaden the legal definition of those injured by the sale or transfer of water rights. When a farm community loses the water that is the basis for its economy, for instance, it loses its vitality. He wants to broaden the definition of those injured to include those farm communities.

Colorado law from the beginning has sought to stop water speculation and hoarding. It’s founded on the concept that waters of natural streams belong to the people and should be available only to those with actual needs and should not be hoarded by those without legitimate needs.

Court cases in 1979 involving the Vidler Tunnel and another case in 2004 from southeast Colorado further clarified that a water rights buyer had to have clear evidence of beneficial use before a sale could be consummated.

“You can buy a car and put it in your barn and leave it there for 50 years without ever using it. You can’t do that with water,” said Peter Fleming, general counsel for the Colorado River District and another member of the work group.

The new worry, described in the report as “investment water speculation,” was provoked by purchases by non-traditional water buyers. Water export proposals in the San Luis Valley as well as the purchase of large, water-rich ranches in the Grand Valley on the West Slope by investment banks are behind current efforts to strengthen Colorado law.

The state work group spent hours this past year trying to establish what constitutes a non-speculative sale of water and what constitutes an effort to hold, or hoard water, in order to profit off of future shortages.

It’s accepted that there can be profit in the sale of water rights. But how much is too much? And should state government care?

“Some people perceived those businesses to be more concerned with generating a profit based on changes in the market value of water rights than with using the water, and hence described those purchases as ‘speculative,’” says the executive summary of the state’s report.

If that potential financial reward to a speculator hasn’t happened yet, Fleming said, in theory it could.

The report is scheduled to be discussed today, Aug. 25, at the Colorado legislature’s interim Water Resources Review Committee meeting in Steamboat Springs.

Coram sponsored the 2020 bill that resulted in formation of the anti-speculation work group. After reading the 66-page report, Coram said he doesn’t intend to interfere with the right of a farmer to sell their water.

But he said the potential for speculation is real and growing.

Most of the attention in Colorado’s discussion has been focused on the Grand Valley. There, New York-based Water Asset Management owns 2,300 irrigated acres and 2,800 acres, according to James Eklund, the founder and chief executive of Eklund Hanlon, a Denver-based legal firm representing the company. Eklund is former director of the Colorado Water Conservation Board.

Coram and Eklund both have Western Slope roots in agriculture, and both believe the state report comes up short. “It was a gigantic waste of time,” said Eklund. He describes the worries about speculation as a “manufactured crisis.”

“We have been seeking ways to devalue people’s water rights. That’s what I read in the 66 pages,” he said. And the narrative that triggered their deliberations was a false one that relies upon a fear of outsiders, “people who don’t look like us or talk like us, who aren’t from around here.”

Alexandra Davis, also a work group member, said water should be treated differently than other common items. “We are talking about a critical resource, something everybody needs. It’s not like oil and gas. It’s not like gold. It’s not like steak because there are different types of food,” said Davis, deputy director of water resources for Aurora Water.

Farmers and ranchers want to ensure they can realize price gains on water, just as home buyers hope to see appreciation in their investment. But there is a difference between house-flipping and flipping water rights.

“Poor people need it, rich people need it, fish need it, farmers need it, and we need for farmers to have it to grow our food,” said Davis. “There is something different about water because it’s a critical resource.”

If left entirely to market mechanisms, she said, that leave the possibility that a critical resource can be cornered by those of greatest wealth, “because it’s water, that’s unacceptable.”