Are Colorado’s Rules Strong Enough to Halt Water Profiteering? A new group aims to find out 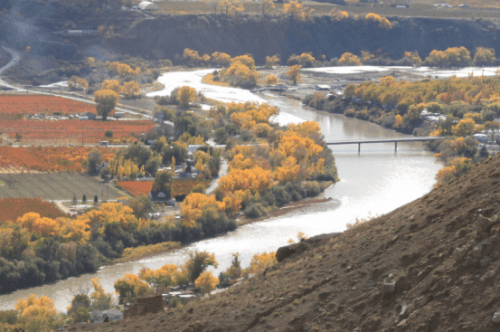 In Colorado’s Grand Valley, a Manhattan-based hedge fund has purchased a handful of farms over the past few years. Ag producers are leasing those farms and their water for now, but Coloradans worry these deals and others like them could be long-term plays to profit from water rights to the detriment of Colorado water users. By Donna Boley via Flickr

Colorado’s anti-speculation water laws are considered some of the toughest in the West. Still, state lawmakers worry those laws may not go far enough. That’s why an 18-member work group is exploring ways to strengthen the rules. Recommendations for proposed changes are due by August 2021.

“In my mind, I think speculation is going on,” says Sen. Don Coram, a Republican who represents several Western Colorado counties and who co-sponsored SB20-048, which directed Colorado’s Department of Natural Resources to form the work group. “There are situations that are just not meeting the smell test for me. We need to look under the tent and see what’s going on.”

With water demand and prices soaring, lawmakers worry about loopholes in Colorado’s anti-speculation laws, pointing to recent investment group purchases of farmland and their senior water rights on the West Slope and in the San Luis Valley. So far, the investors are using the water for irrigation, a legally beneficial use, but lawmakers worry they’re making a speculative play, banking on a massive increase in the value of those rights with the intention to profit from them in the future. Irrigation may just be an interim placeholder that’s part of a larger investment strategy.

So, how will the work group’s members make recommendations for improvement? They’ll likely start with a thorough history lesson and a deep dive into existing anti-speculation law, says Kevin Rein, Colorado’s state engineer. Rein leads the group alongside Scott Steinbrecher, a Colorado assistant deputy attorney general. Other participants include water engineers, attorneys, members of the Colorado Water Conservation Board, farmers and ranchers, representatives of environmental nonprofits, and water managers. Given the diversity of group members and knowledge, the group is well-poised to tackle the challenge at hand, Rein says.

But some work group members are already contemplating how changes to Colorado water law could hurt landowners. Joe Frank, general manager of the Lower South Platte Water Conservancy District in northeastern Colorado, plans to participate in the work group with an open mind but has questions: How will the changes impact an irrigator’s ability to sell their water and land? Will the value of their land or water suffer because of these changes?

“There’s this tension here, especially in our basin, but also statewide, of a high demand for water, which inflates the value of it—it’s hard to blame farmers for wanting to sell their water because of all different kinds of circumstances,” Frank says. “We would prefer them to keep their water and stay in agriculture because that’s the economic base for our area. But you can’t just go say, ‘We’re going to put a stop to it.’ Now you’re impacting somebody’s property rights.”

Frank said he also has some questions about the constitutionality of any changes the group may propose.

“I do have some reservations about whether this will actually solve a problem without causing another one,” he says. “You don’t want to cause unintended consequences here.”

Sarah Kuta, a Nebraska native and graduate of Northwestern University, is a freelance writer based in Longmont, Colo.