As COVID-19 continues to roil Colorado and the world, experts are suggesting that the pandemic may teach all of us to work together better. If that’s the case, then a collaborative water system for the Front Range may be a harbinger of things to come, according to a new study.

Released March 10, just days after Colorado reported its first cases of COVID-19, the study indicates that if Front Range cities band together to build a large-scale water reuse and delivery system, water sufficient to serve 100,000 homes could be developed.

It would rely on moving water between cities and farms, building new pipelines, as well as storing water underground and in off-channel reservoirs, and could be done without tapping new sources on the West Slope.

Such a project, if built, would cost $3.2 billion to $4.4 billion, according to the study, a price that is in line with other water delivery systems now being developed.

That cost includes 50 years of operations and maintenance and assumes the water would likely need to be heavily treated.

The study comes as the Front Range faces the most acute water shortages in the state, with a gap between water supply and demand for municipal and industrial users of as much as 540,000 acre-feet projected by 2050, according to a recent analysis by the state. Farmers could face a gap nearly twice that large, particularly in dry years.

Lisa Darling, executive director of the South Metro Water Supply Authority, helped oversee the study. She said once Colorado recovers from COVID-19, she hopes communities will be able to use it as a roadmap toward future water supplies. (Editor’s note: Darling is president of Water Education Colorado, the nonpartisan nonprofit that sponsors Fresh Water News.)

“It shows that it’s feasible, and it will allow people to see exactly what it might look like,” she said.

The South Platte Regional Opportunities Water Group (SPROWG), a group that includes dozens of Front Range water districts, sponsored the work. The study analyzed different alternatives for capturing water in the South Platte River as it approaches the Nebraska border, an area where flows are typically more abundant than they are closer to metro Denver, where the river is heavily used and its waters largely claimed by existing users.

Because the river’s supplies in average years are already spoken for, any new water would be developed by capturing some during flood years and, in other years, reusing water already diverted from other basins via new water treatment plants and pipelines, making that water supply go farther.

Funded by the Colorado Water Conservation Board (CWCB) and several cities, including Denver and Aurora, the study was geared to help taxpayers from metro Denver to Brighton to Greeley and beyond determine whether they want such a project, how it would be configured, and who would benefit and shoulder the cost. 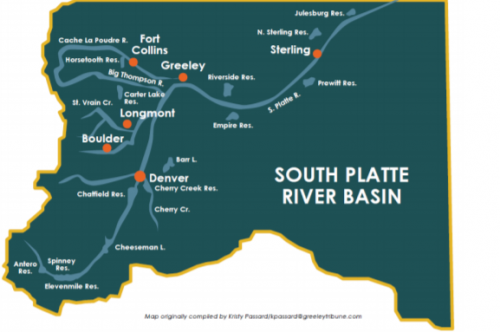 The South Platte Regional Opportunities Water Group proposal could serve cities from Denver to Greeley and beyond.

“The price tag sounds like a lot, but it is comparable to other projects in the South Platte Basin,” said Mary Presecan, a consultant with Leonard Rice Engineers and one of the study’s authors.

Water sold through the Loveland-based Colorado-Big Thompson Project is selling for $78,000 to $92,000 an acre-foot, Presecan said, while the SPROWG study analysis shows water developed through this new partnership would cost from $44,000 to $58,000 an acre-foot. An acre-foot equals nearly 326,000 gallons, enough water to serve on average two urban homes for one year.

In addition to water for fast-growing small communities, the study examined providing water to farmers on the Eastern Plains. These farmers control some of the oldest, most senior water rights in the region, but the water is increasingly being sold to thirsty cities, threatening local economies and the livelihoods of farmers left behind, and ultimately reducing the state’s ability to grow food.

A collaborative reuse project could provide additional water to water-short farms, as much as 35,000 acre-feet a year, allowing them to maintain their agricultural production.

“If there is an opportunity to be part of a regional partnership and address the ag gaps, we are all for it,” said Joe Frank, general manager of the Lower South Platte Water Conservancy District, a sponsor of the study.

“SPROWG is a concept where we are starting at a high level and drilling down. Can we bring the whole [South Platte River] Basin together to figure out if this can work,” Frank said.

Early on, the study drew fire from West Slope interests and environmental groups, who feared it would inevitably lead to bigger efforts to tap the drought-stressed Colorado River and could harm the South Platte River.

But feedback from dozens of meetings with citizens, environmentalists, taxpayers and water officials during the past year led the study’s authors to conclude that the project can be structured in such a way to provide environmental benefits, as well as water for cities and farms.

“This is a collaborative way, and an innovative way to conjunctively manage and use a variety of water sources for multiple beneficiaries,” said Matt Lindburg,  a consultant with Brown and Caldwell and one of the study’s authors.

State water officials, such as Gail Schwartz, who represents the Colorado River Basin on the Colorado Water Conservation Board, said she believed the regional, collaborative premise underlying the early work could be utilized elsewhere.

“It’s a great model for collaborative thinking,” she said, at the CWCB’s March board meeting in Lakewood. “I think it could work for other parts of the state too.”

Whether the pandemic will bench the work on this new South Platte water delivery planning isn’t clear yet.

But Frank is optimistic work will continue. “The pandemic could slow us down, but it definitely won’t stop us. Now the next step will be determining [which communities] are really serious about coming together and taking this to the next level,” he said.