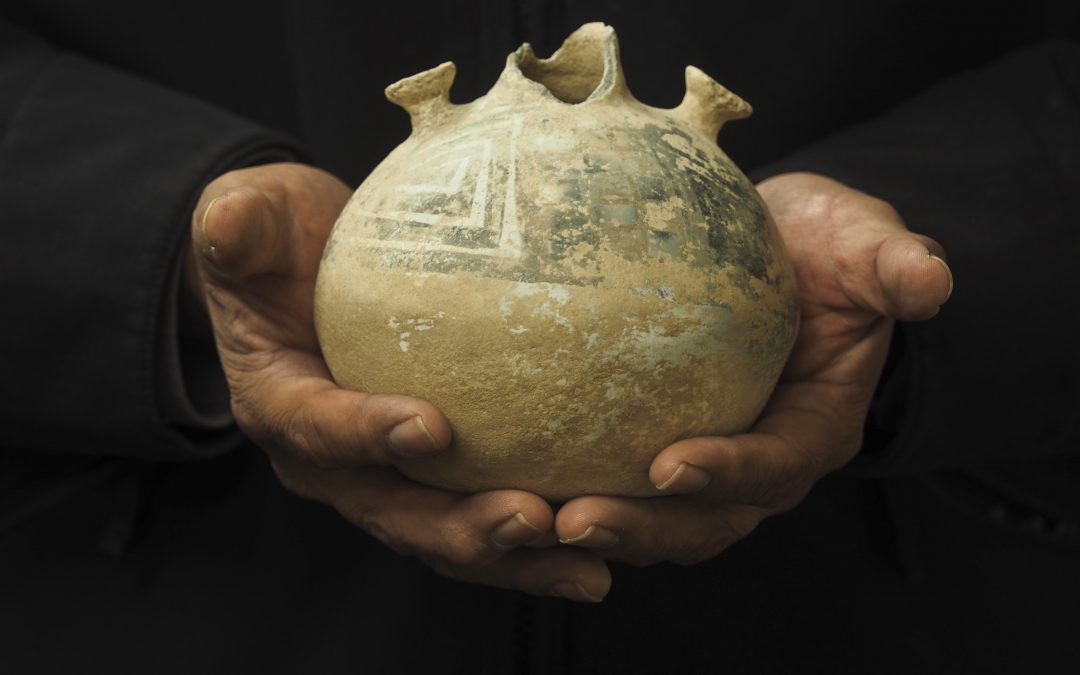 Eric Whyte, Hay Manager for the Ute Mountain Ute Farm & Ranch Enterprise near Towaoc, Colo., holds a pot that was used to hold water by the Anasazi People in the Four Corners area of Colorado thousands of years ago. The pot was found in a field when work began clearing land for the farm and ranch enterprise. Credit: Dean Krakel, special to Fresh Water News

Colorado and three other Upper Colorado River Basin states have, for the first time in history, embarked on a series of formal meetings to find a way to negotiate jointly with some of the largest owners of Colorado River water rights: tribal communities.

The states, which include New Mexico, Utah, Wyoming and Colorado, began meeting with six tribes several weeks ago, according to Rebecca Mitchell, director of the Colorado Water Conservation Board who also represents Colorado on the Upper Colorado River Basin Commission.

The six tribes are among 30 tribal communities in the seven-state Colorado River Basin, which, combined, have paper water rights to roughly 25% to 30% of the river’s flows, more than 3.2 million acre-feet of water. 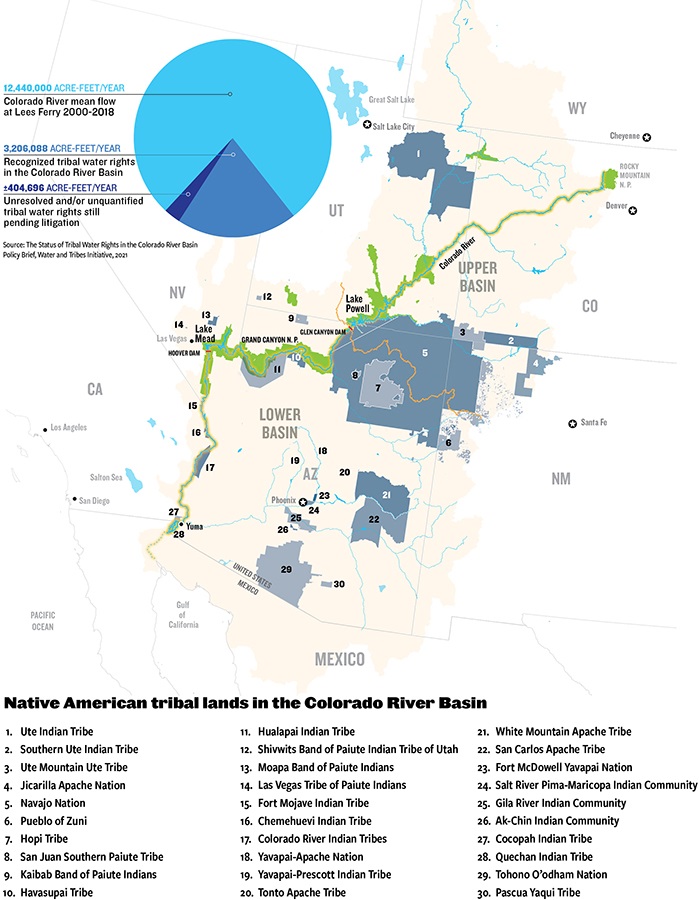 The news came Sept. 16 at the Colorado River District’s Annual Seminar in Grand Junction. The river district represents 15 counties on Colorado’s West Slope and is responsible for policy and managing the river within those boundaries.

For more than 100 years, modern water management in the American West has been conducted by the federal and state governments, without formal tribal leaders.

Under Western water law, water has to be measured, its historical use rates certified, and it has to be diverted so that it can be put to beneficial use. Tribal water rights are treated differently. Tribes’ water rights date back to the time when the reservations were created, based on a law that was applied retroactively – many reservations were established before the law existed and so the amount of water they received was never quantified or adjudicated. For this reason, many tribes have had to settle their water rights within the state or states where their reservation lies— some of those negotiations remain unsettled. Many tribes have never measured their water use and, even among those tribes with quantified water rights, many have never had the money to build the dams, pipelines and reservoirs that allow them to put the resource to use.

Roughly 60% of the water the tribes legally possess has never been developed or integrated into the region’s hierarchy of water rights, though they are often some of the oldest, according to tribal estimates.

For too long, he said, “The policy-making process has been left up to the seven basin states and the federal government. We want to speak on behalf of our own water. We’ve heard a whole lot about scarcity and pain,” he told the Grand Junction audience of roughly 400 people. “And we know a whole lot about that. We’re asking, we’re demanding participation because it is a basic human right.”

During the past five years, as the Colorado River has sunk deeper into crisis, the tribes have begun working together and asserting their right to negotiate with federal, state and local water agencies to determine how their water will be used, how badly needed tribal water systems can be built, and how tribes can be fairly compensated for the water that has long been used by others.

Despite increased public pressure to recognize the tribes’ water rights and to include them in critical negotiations and decision-making processes, they continue to be shut out, including in the most recent talks over how to achieve the 2 million to 4 million acre-feet of cuts that U.S. Bureau of Reclamation Commissioner Camille Touton ordered back in June in order to keep lakes Mead and Powell operating.

Another set of critical talks set to begin in the near future still has no mechanism for including the tribes. These are talks that will determine how to operate the river well into the future, after the current framework for river operations, known as the 2007 Interim Guidelines, expires at the end of 2026. Tribes were not included in the talks leading up to the 2007 agreement either.

Lorelei Cloud, a member of the Southern Ute Tribal Council, said traditional water users in the Colorado River Basin won’t survive unless tribal waters are legally recognized, developed and put to use by tribes and other users in the basin.

“We are a sovereign government. We should be considered just as a state would be. If you think that we shouldn’t be involved, then don’t include our 30% allocation for anyone else’s use … We need to be included in every one of these conversations. My reservation was established in 1868. We are first in time first in line. You cannot discount us,” she said.