Welcoming Tribes to the Table 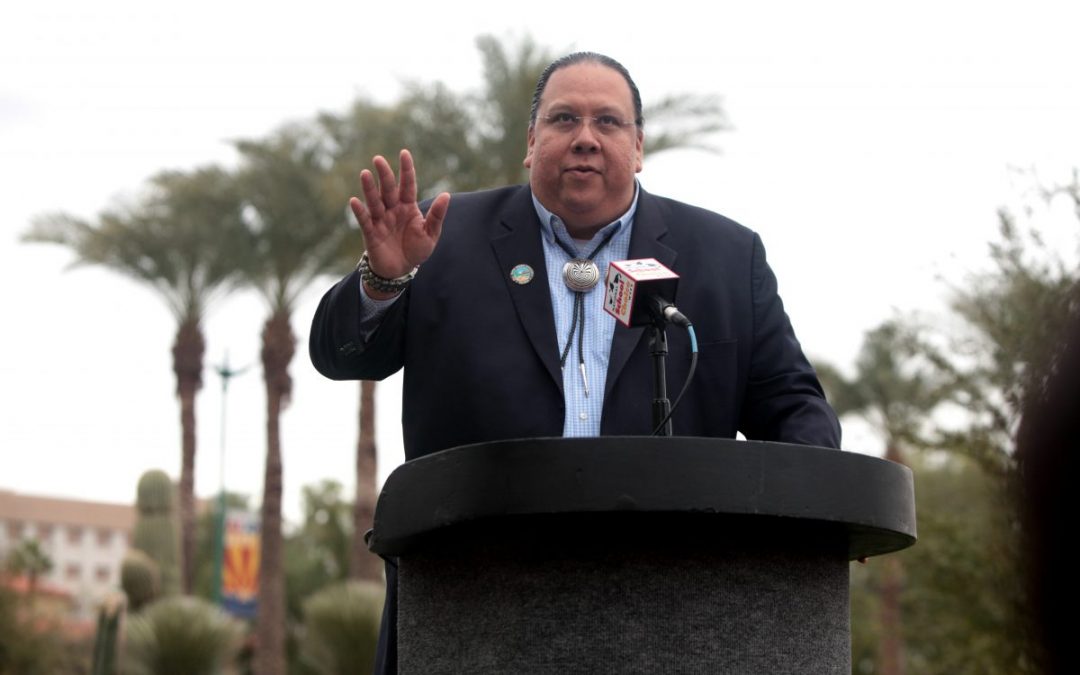 Governor Stephen Roe Lewis is a leader of the Gila River Indian Community, the Central Arizona Project's (CAP) single largest contract, with 311,000 acre-feet conveyed to it through CAP. Gov. Lewis negotiated on behalf of the community during drought contingency plan talks and, with an agreed-upon mitigation package, will take less water out of the Colorado River during periods of shortage. Credit: Gage Skidemore / Flickr

When the Colorado River Basin states hashed out the 2007 Interim Guidelines for Lower Basin Shortages, they failed to involve the 29 tribes that also hold water rights to this lifeblood watershed. Nor were tribes initially included in the 2012 Colorado River Basin Water Supply and Demand Study, which only incorporated tribal input after tribes fought for seats at the table. The pattern of exclusion infuriated the sovereign nations—which hold water rights to some 20 percent of the Colorado River’s volume. According to the U.S. Bureau of Reclamation, quantified tribal water rights comprise about 2.9 million acre-feet in the basin, but 12 tribes hold unresolved water rights claims.

So the tribes revived the languishing Ten Tribes Partnership, established in 1992 to promote Native American involvement in Colorado River Basin discussions. The revitalized collective worked with the U.S. Department of the Interior and the Bureau of Reclamation to conduct the 2018 Tribal Water Study, which builds on the 2012 findings by shining a light on tribal water resources and how their eventual development might impact river operations.

The study became a turning point for tribal involvement in Colorado River management. By bringing wayward stakeholders to the table, it ushered in an unprecedented era of collaboration. “Our success has always been through a collaborative path,” says Daryl Vigil, water administrator for the Jicarilla Apache Nation and spokesperson for the Ten Tribes Partnership.

But the study also revealed discrepancies in tribes’ capacity to develop their water rights. Some claims remain unsettled or in dispute, while others are hampered by decades of legislation that ignored tribal rights to Colorado Basin water.

To bridge those gaps, Vigil co-founded the Water and Tribes Initiative, a nexus of tribes, federal agencies, academics, law experts and conservationists crafting a template that tribes can use to build capacity and participate in water dialogues. “No one’s going to build a pathway for tribes,” Vigil says. But by participating in the initiative, the sovereigns can identify their needs and share solutions.

“You can’t determine what is possible unless you engage other stakeholders,” said Stephen Roe Lewis, governor of the Gila River Indian Community, at the Water Education Foundation’s Colorado River Symposium in September 2019. “Leadership is essential in important issues. It’s important to know who you’re negotiating with on the other side of the table—once we find that table,” Lewis said.

Meanwhile, the Ten Tribes Partnership has initiated frank conversations with state and federal leadership. In 2017, during the Colorado River Water Users Association’s annual meeting, the group facilitated discussions on changing the siloed paradigm. Subsequent luncheons staged additional dialogue between tribal and non-tribal water managers. The key question: How will the next set of operating guidelines look?

“We hope that by next year, we’ll have a sketch,” says Vigil. But already, the basin tribes have significantly increased their representation and participation in water discussions.

The conversations have also built support for the tribes’ mission to “lead from a spiritual mandate to protect the sacred waters of the Colorado and keep it available for the benefit of all living creatures.” To people outside the tribes, “that can sound like frou-frou stuff,” admits Vigil. “But we’re working on that. Because if you don’t have a healthy, sustainable, living river, then the rest doesn’t matter.”