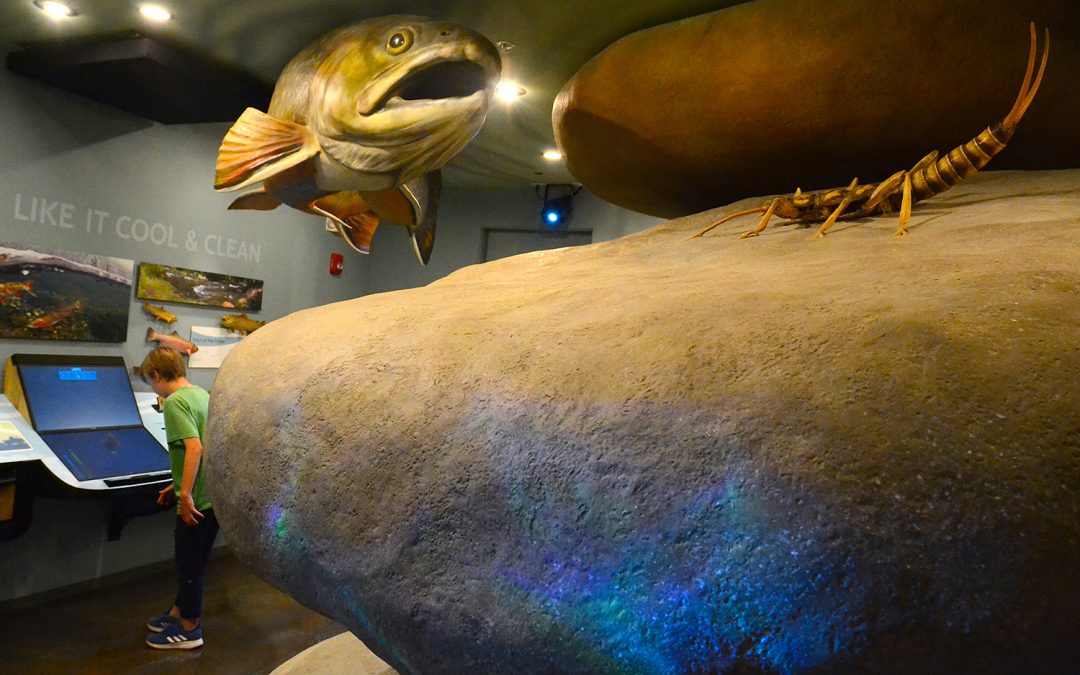 The trout is the size of a mini-van, an idol big enough for anglers to worship and tempt for bites on the adjacent Fraser River at sunrise, but just a few feet away, Tyler Maurais was getting a hard lesson in what it means to be our state’s iconic fish when you aren’t supersized.

“NOOOOOOOOOOOO,” Tyler, a seventh-grader at East Grand Middle School in Granby, wailed as his cries bounced around the nearby life-sized reproduction of the Moffat Tunnel.

The game Tyler was playing, one of many at the brand new Headwaters River Journey museum in Winter Park, is every bit as cool as Minecraft, he said, but it can be even more cruel, as the goal is to help your trout survive by eating, swimming and avoiding traps such as anglers and osprey. Alas, one or the other of Tyler’s trout avatars ended his journey (technically his life) in the two tries Tyler had to get to a safe place to lay eggs.

The game is one of more than two dozen interactive displays at the Headwaters River Journey that entertain as well as teach both children and adults about the water that flows through the Fraser Valley into the Colorado River. The museum opened July 14 as part of the Headwaters Center, an off-the-grid, rustic event venue on the edge of downtown Winter Park. The idea is to educate Coloradans and tourists about the intricate relationships between the Fraser River and the massive Colorado River Basin, and the Fraser River’s deep water ties to the Front Range, where more than half of its water winds up.

The museum, backed by Winter Park and a local foundation, takes patrons on a journey, hence the name, from the mountains to the Fraser River and, in some cases, across the Continental Divide to the Front Range. Along the way, the exhibits show them where the water comes from, what benefits it provides, and how we can conserve to make the finite resource last beyond 2030, when it’s projected that many cities and towns in the state will need more water to meet demands.

That date is purposely written in pencil because our booming population may advance it, while changing attitudes about conservation may prolong it.

Kristin Ashworth Fanch did her best last week to talk over all those displays, videos and games during a tour she was giving to seventh-graders from the Granby middle school. At times, she sounded like a teacher, a parent or, yes, even a babysitter, as the students flew like those hungry osprey over Colorado in one display or, in another, cranked a wheel to open the gate to allow water into the Moffat Tunnel and watch the river sink down to bare rocks as a result.

“This is IMPORTANT,” Fanch said with a determined smile. “This water is DIVERTED. Do you know what that means? That’s IMPORTANT.”

Hey, Fanch gets it. There’s a lot of cool stuff, and she traveled for months all over the country, even to Iceland, to get ideas on how to present the complex and sometimes boring details about water in a fun, interactive and even entertaining way.

Now her tours boast quiz pods, for starters, and a beaver dam with crawl space and a video on the critters inside, and a large video screen that winds around a room designed to let you experience the weather you’re seeing, including the snow that feeds the Fraser River. There are rocks you can lift to see the bugs trout eat clinging underneath and thirsty turf that teaches you about alternatives to the popular Kentucky bluegrass that makes up so many Colorado lawns, and that video where you can fly like an osprey (not an eagle, sorry Steve Miller), and a floor that squishes as if you were walking through a marsh soaked by the river. There’s a place where you can put your face on a video of a kayaker slashing down the river and email yourself the video so you can post it on social media, and a game that forces you to landscape your yard while saving water and keeping your family happy at the same time. (For example, pouring concrete in front of your house may save water but your pixelated pseudo family will hate you). You can touch all this stuff, too, except they don’t want you to climb on the huge rocks that surround the giant trout. Bummer. 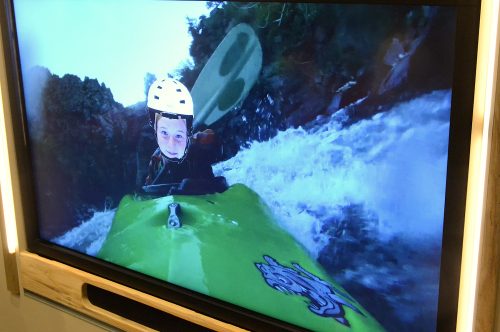 A student from East Grand Middle School in Granby attaches her face to a kayaker in one of more than 30 exhibits at the Headwaters River Journey museum in Winter Park Sept. 18, 2019. Credit: Dan England

“People are using their leisure time to come visit,” Fanch said. “So you want this to be fun and entertaining as well as informative.”

The information on display at the Headwaters Center IS important, as Fanch told the kids, because water isn’t magic; it comes from rivers fed by the mountains. Climate change may reduce the water we Coloradans can expect to fall from the sky, and yet, Colorado’s population could reach 8.5 million by 2050 – nearly 3 million more than we have now. But the museum doesn’t preach or even take much of a side, even if it does offer ways to get involved in river conservation. It simply presents those facts and then asks, “Is what we have enough?”

Even so, groups that promote conservation have embraced the museum. Trout Unlimited recently provided $5,000 to lower or waive admission fees for children.

“This museum tells every single thing in one place that we want to talk about,” said Mark Eddy, a board member Trout Unlimited’s Headwaters chapter.

Halfway through the tour, Fanch introduced a few of the kids to the trout game, which is how Tyler found himself battling hungry birds later that day during free time.

Fanch found herself locked in the usual struggle between getting the message out and allowing the kids to have fun with the experience. It’s a struggle that rarely bothers her, as long as she believes she’s delivering the message that water is finite and that there are ways to save it and the many species (including us) that benefit from it. One of the girls watched Fanch play, waving her hand like a fish in front of the screen to guide her fish avatar, and gave Fanch a sign that at least some were indeed listening.

“Where does the fish lay her eggs?” the student asked, and Fanch smiled, knowing she had at least one student hooked.

Correction: An earlier version of this article incorrectly identified Mark Eddy as a board member of Headwaters River Journey.

Dan England is a freelance writer who lives in Greeley and the media advisor for Laramie County Community College in Cheyenne, Wyo.