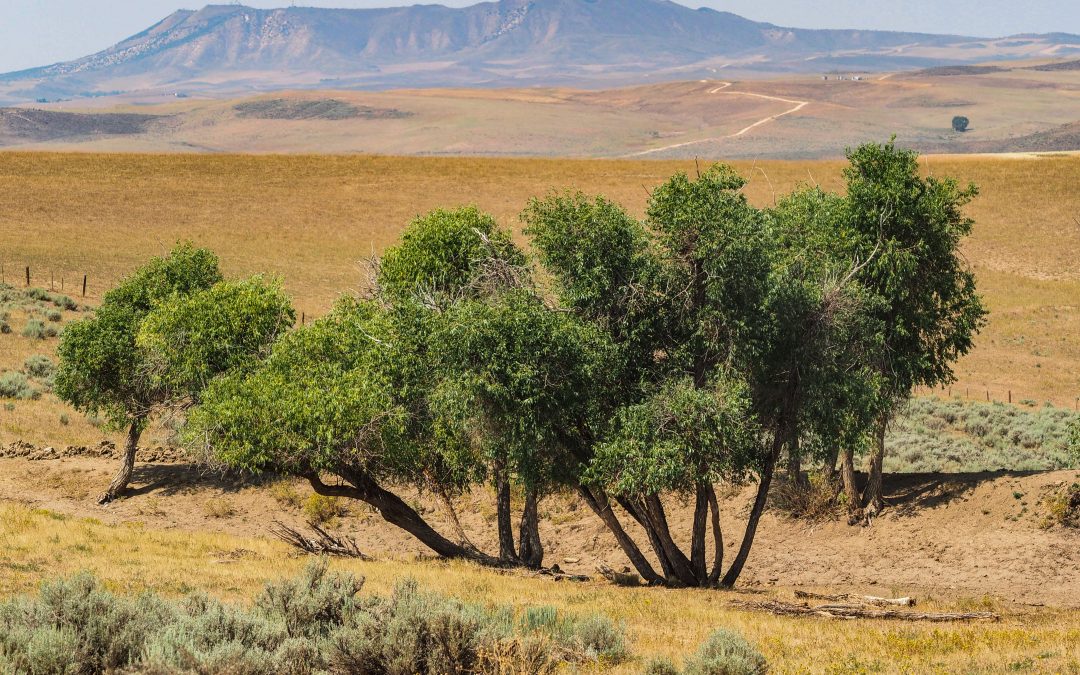 A stock pond that is normally full of water stands dry because of drought on the Little Bear Ranch near Steamboat Springs, Colo., on Aug. 11, 2021. Due to low snowpack, warming temperatures and dry soil during the past two years, followed by the same in 2021, Northwest Colorado is in a severe drought. Credit: Dean Krakel, special to Fresh Water News.

A low snowpack, absent monsoon rains, dry soils, record-high temperatures and thirsty crops made 2020 the third-driest year on record in Colorado, and, according to the Colorado Climate Center, it was the first time since 2012 that 100 percent of the state was in drought for some portion of the year.

A repeat of similar conditions in 2021 is making Colorado’s continuing drought across broad swaths of the state’s Western Slope even more devastating.

“At any given time you can find drought somewhere in our state,” said Assistant State Climatologist Becky Bolinger during a state Drought Task Force tour in Northern Colorado last week. “This may not be the worst drought we’ve ever had, but what makes this year particularly bad is that it follows on the tail of two other droughts [in 2019 and 2020]. We don’t have enough time [between droughts] to recover from the previous drought before we’re in the next one.”

Nowhere is that more clear than in the seven-state Colorado River Basin, where Monday the U.S. Bureau of Reclamation declared the drought situation so extreme that for the first time in history Arizona and Nevada will see their annual water supplies drawn from Lake Mead dramatically reduced.

Closer to home in Colorado, west of the Continental Divide, the state has experienced 50 consecutive weeks of category D4 drought, the most extreme drought condition, according to the U.S. Drought Monitor.

Whether the fall and winter will bring any relief isn’t clear yet.

“I’m not particularly optimistic, unfortunately, about the coming winter,” said Peter Goble, a climatologist with the Colorado Climate Center in Ft. Collins. Goble said La Niña conditions will return for the fall and winter, bringing the potential for more moisture in the north and western parts of the state, but there is little indication that the Four Corners region will get any benefit. In addition, because 2022 is shaping up to be a second La Niña year, “events tend to be warmer and dryer,” he said.

Bolinger described the Colorado River Basin as being at a breaking point and the current drought affecting Colorado, Utah and Arizona as “the final straw that might break the camel’s back.” Lake Powell and Lake Mead, the downstream catchalls, have dropped to historic low levels. The lakes will never be 100 percent full again, said Bolinger, “unless we have 10 amazing winters in a row. The amount of water we have isn’t enough to meet expected demands so in the next 5-10 years we’re going to have to rethink how all of these states are supposed to equally share the water.”

Cattle and sheep are being sold off early. There hasn’t been enough water to grow enough hay. Normally full stock ponds are dry. Grasses are dying. Weeds and grasshoppers are rampant.

“In 40 years this is the first time we’ve had to haul water to our cattle,” said Chad Green, owner of the Little Bear Ranch in the Yampa River Basin. “Usually our irrigation water runs until July 1. This year it was shut off on May 29. We harvested our wheat crop for hay. The past two years have been bad. But this year,” Green paused, “this year is horrible.”

But it’s not just farmers who are suffering. Those who rely on the state’s iconic rivers for recreation are also seeing the devastation this multi-year drought cycle has imposed.

“This river is critical to our community’s health,” said Kara Stoller, CEO of the Steamboat Springs Chamber. Like other mountain communities, Steamboat is home to an array of outdoor gear companies and tubing and rafting companies. And the ski resort relies on the river for snowmaking.

This summer the river has been closed to recreation on multiple occasions to relieve stress on the fish population.

“Our water resources are our lifeblood,” said Stoller.

Bolinger doesn’t feel the “doom and gloom on a state level” that she feels for the entire Colorado River Basin. “But when people talk about drought, they talk about the new normal. We haven’t gotten to the new normal yet. We’re on the climate change train and things are still changing. Where we land will ultimately dictate what things look like.” 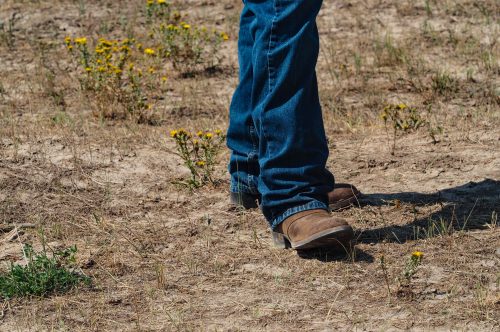 A rancher digs a boot heel into the dry ground of the Little Bear Ranch near Steamboat Springs, Colo., during the Northwest Colorado Drought Tour on August 11, 2021. Credit: Dean Krakel, special to Fresh Water News.

To Marsha Daughenbaugh, a 4th generation rancher near Steamboat Springs, the relentless dry spells are about much more than the condition of the local ranching economy.

“This is just one ranch, one county, one region, one state, but really, this is the story of the whole West,” Daughenbaugh said.