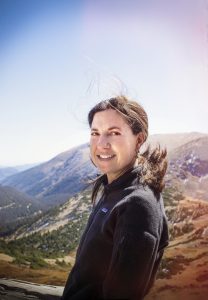 Jennifer Pitt made the first long leap to her career on the Colorado River Plateau from Manhattan to Mesa Verde National Park in 1990. She’d been working with the New York City Parks and Recreation Department following her graduation from Harvard University in 1988 with a Major in History and the Literature of America. Her undergraduate studies had focused on how artists and novelists depict urban parks.

Once you’ve been on the River, the River always calls you home.  Jennifer’s graduation gift in 1988, planned as a celebration of her mother’s 50th birthday, was a Colorado River float trip in one of Martin Litton’s wooden dories. In the summers of 1990-1991 she headed from New York City to Mesa Verde National Park to serve as an Interpretive Ranger. There, in the canyons and the alcoves, she learned how the ancestral Pueblo people had arranged access to water. “I led visitors into Spruce Tree House and Balcony House. On my own time, I discovered springs the people had used and water catchment structures they had built. To survive, they had to learn how to share scarce water fairly with each other.”

Her 1993 Yale School of Forestry Master’s Degree Program in Environmental Studies took her back to the Hudson River. She concentrated on water quality and land use challenges in a one-hundred mile reach upstream of the five New York boroughs. This led to Washington D.C. work in the office of Congressman Mike Kopetski of Oregon from 1993-94, then to the National Park Service as a Conservation Planner from 1994-1998. From her Potomac River moorings, she ranged out to the Pacific Northwest organizing technical studies and community meetings for conservation organizations in Idaho. During this time, she helped develop the White House Council on Environmental Quality’s American Heritage River’s program.

In 1999, she went to work with her finest mentor, Dan Luecke, then the Regional Director of the Environmental Defense Fund based in Boulder, Colorado.  “You can be an advocate and have disagreements about values,” he advised me, “But never waiver in treating people with respect and dignity. You can have a discussion on their terms and look for alternatives.”  At EDF, she immediately stepped into co-authorship of “Delta Once More,” an influential report which concluded that modest water deliveries into desiccated sections of the Colorado River Delta within Mexico could significantly revive and maintain critical wetlands and riparian ecosystems. This could be accomplished, said the report, through “cooperation, accommodation, and creativity” (emphasis in original) while respecting the water supply interests of the seven U.S. basin states and two states of the Republic of Mexico within the parameters of the “Law of the River.”

How to convince water managers in the United States and Mexico that NGOs had a place at the table suitably involved Jennifer and a 2004 raft trip. In Water is for Fighting Over and Other Myths about Water in the West, author John Fleck relates how Coloradan, Bennett Raley, then Department of Interior Assistant Secretary for Water and Science, invited her, “the token environmentalist,” to run the Colorado River through the Grand Canyon with a group of federal officials and state water managers. In the teeth of what has turned out to be two decades of prolonged drought in the Colorado River Basin, Raley’s goal was to “come up with a much more durable solution” than the federal government could impose. When Sid Wilson, a senior Arizona water manager, began to talk amicably with Jennifer along the river, says Fleck, “a change in attitude had taken place that rippled out through Colorado River Basin problem solving for years to come.”

Jennifer gives credit to many others for the pulse flow of 2014 that brought water into dried-up stretches of Colorado River Delta across the border.  Through a highly collaborative process memorialized by Minute 319, Mexico and the United States had agreed to storage of a significant portion of Mexico’s Treaty water in Lake Mead for release all the way downstream. Jennifer was there that day in the Delta watching Mexican families play in water they hadn’t seen for a generation. As if by magic, though the release was carefully timed to germinate native willow and cottonwood seeds, Delta restoration through base flows and periodic pulse flows has become an objective of national and international Colorado River water policy. Non-governmental organizations help to lease or purchase water as part of their restoration commitment. Jennifer has especially enjoyed working with Mexican citizens Osvel Hinojosa, Yamilett Carrillo, Francisco Zamora and Carlos de la Parra, along with Peter Culp, who hails from Arizona.

The River also brought home to Jennifer her immediate family. At a Tucson, Arizona water law conference meeting in 1999, she met her future husband, Michael Cohen, then living in Oakland, California.  His long affiliation with the Pacific Institute focuses on Salton Sea restoration. Jennifer continues her Colorado River work with the Audubon Society. Together with their fourteen-year-old daughter, Hannah, they make Colorado, the headwaters state, their home.

“Jennifer is imaginative, committed, quick, and fearless,” says Dan Luecke. “What she and her bi-national colleagues have accomplished is awe inspiring. It was clear, almost from the beginning, that she was going to make a difference. There are few like her.”