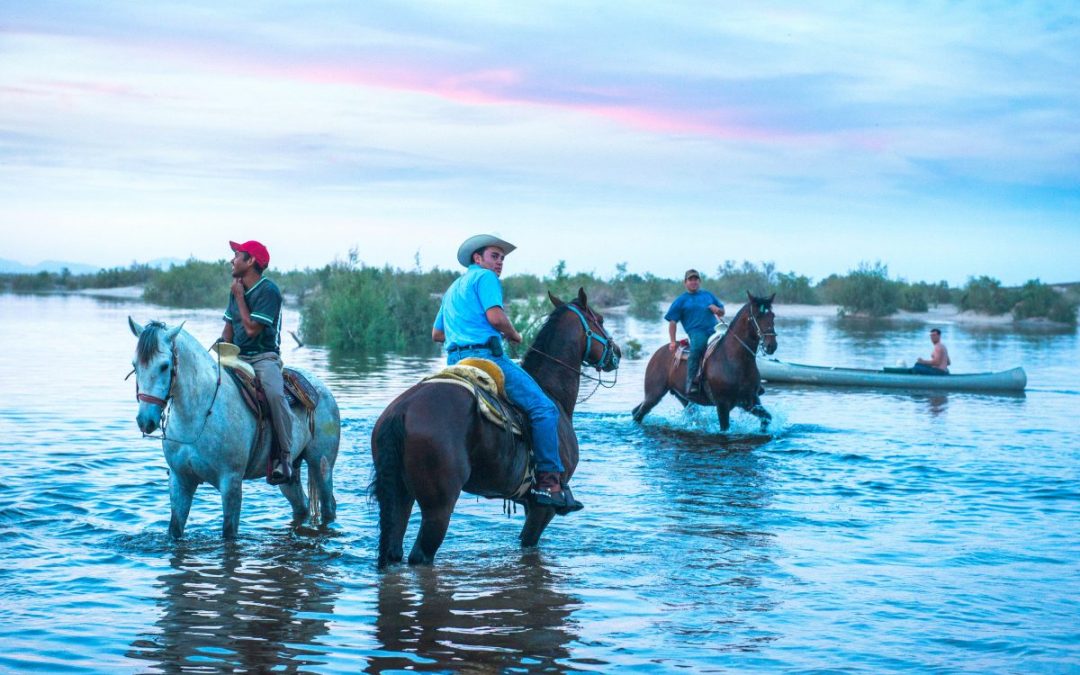 When the 2014 pulse flow brought water back to the long-dry Colorado River Delta, Mexicans celebrated, bringing galloping horses into the river, fishing, and playing in the water. Credit: Peter McBride

The threat of scarcity on the Colorado River could have caused the United States and Mexico to compete. Instead, they are collaborating. The two countries made major strides in the past decade to address scarcity by establishing agreements known as “minutes” that build upon the 1944 Mexican Water Treaty.

In 2012, they signed Minute 319, which hailed a more holistic, broader reach for river management, thanks to a robust negotiation table that included nongovernmental organizations. NGOs realized they were more likely to see results through binational collaboration, rather than a lawsuit or campaign, says Jennifer Pitt, Audubon’s Colorado River Program director.

Through Minute 319, the U.S. and Mexico formed a partnership to share in water shortage and surplus. The agreement also set aside water for the parched Colorado River Delta, which provided the 2014 pulse flow that brought Colorado River water to the Gulf of California for the first time in 16 years.

Minute 323, signed in 2017, expands on lessons learned during the five-year span of Minute 319. With this minute and related guidelines set to sunset in 2026, stakeholders on both sides of the border have a lot of work to do.

Groups are planning to release the environmental flows set aside in Minute 323 in more frequent, smaller volumes. Restoration efforts continue to support native cottonwood, willow and mesquite tree habitat. And stakeholders are exploring options to help the Mexicali Valley become resilient to the Colorado River’s declining supply, an effort Pitt says is critical to Mexico’s role in sharing scarcity.

A key element of Minute 323—the establishment of a binational water scarcity plan—can move forward now that the U.S. fulfilled its own commitment to establishing a drought contingency plan in May.

It will take work and time before we see how drought contingency planning works, in practice, to protect the entire Colorado River system, said Brenda Burman, commissioner for the U.S. Bureau of Reclamation, at the Water Education Foundation’s Colorado River Symposium in late September. This is possible as long as both countries continue to work together, she says. “I am very optimistic about the success of our binational relationship.”

Pitt says results come from investing in relationships and building trust, both at the negotiation table and the dinner table. “Making sure that we break bread together is enormously important. Those personal relationships, we depend on them to push the work forward. If you don’t have that trust in relationships, the more formal progress doesn’t seem possible.”