A Tribute by Mike Preston 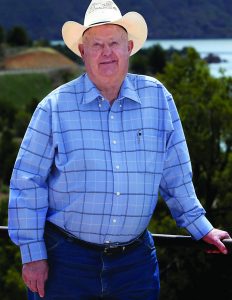 When I first met John Porter in 1980, he had just taken the reins as manager of the Dolores Water Conservancy District. In retrospect, without John’s interpersonal and diplomatic skills, the completion of McPhee Reservoir and the Dolores Project would have been unlikely.

To move the Dolores Project off of President Carter’s “Hit List” and keep the construction of McPhee on track required building a strong coalition between the proponents of the Dolores Project and the Ute Mountain Ute Tribe. John worked with Tribal Chairman Ernest House and County Commissioner Tom Colbert, representing water users on the Mancos River.

Once the outlines of settling the Ute Mountain Ute claims took shape, via their participation in the Dolores Project, John’s relationships with Fred Kroeger, Chairman Leonard Burch and Sam Maynes were instrumental in crafting a settlement that resolved the Southern Ute and Ute Mountain Ute Tribal claims on the other rivers in Southwest Colorado.

At the same time, there was fear on the part of some of the petitioners for Dolores Project irrigation allocations that they would not be able to afford the water. This fear became a pretext for people lobbying against the completion of the Dolores Project. John worked with the Bureau of Reclamation and the DWCD Board to find a means to reassure farmers by phasing in water costs as production and farm income materialized.

John used his relationships in Washington, D.C. to assure legislators that the concerns of local farmers were being worked out in order to protect the benefit of 29,000 newly irrigated acres from Yellow Jacket to Dove Creek, a full-season supply for Montezuma Valley Irrigation Company shareholders, and “wet water” for a 7,600 acre tribal farm, as well as long-term domestic water supplies for the towns in Dolores and Montezuma Counties.

Everything that John promised in his diplomacy and negotiations is now a reality. The Indian Water Rights claims are settled, the cloud is lifted off of the Mancos River, irrigated acreage in Montezuma and Dolores Counties has doubled, and the Ute Mountain Tribe has developed what is recognized as one of the most successful large scale irrigated farms in the West.

In 1990, John joined the Southwestern Water Conservation District Board where he used his diplomatic skills to support completion of the Animas-La Plata Project to bring finality to the Colorado Ute Water Rights Settlement. With these accomplishments in place, John became President of the SWCD Board when Fred Kroeger retired and initiated a grant program that has provided vital help to water oriented entities throughout Southwest Colorado.

Since I took over as Manager of DWCD in late 2007, I learned that John is also an administrative genius. The budgetary and water accounting systems that John built from scratch are still in full use today. John’s application of his interpersonal skills to the Dolores Project was so strong that Reclamation Project Engineer Dana Hill never filled a P.R. position for the Dolores Project, because John’s rapport with the local community made it unnecessary.

When the Basin Roundtables were formed by State Legislation in 2005, John became a mainstay on the Southwest Roundtable and Interbasin Compact Commission. Those of us who manage and care about water in Southwest Colorado have continued to count on John’s representation in all statewide and west-wide water venues at a time of great risk to agriculture as a result of drought, population growth and Colorado River Compact obligations.

John Porter’s legacy is an inspiration to us all. In addition to his many landmark accomplishments, John’s career has demonstrated the role that positive person-to- person relationships play in banding together to do good things. John was a good listener who treated every person and every idea with respect. John was able to take the thorniest issues and help us find the positive alignments to move us forward together. Those of us who have been touched by John can draw on his inspiration as we meet the challenges ahead.