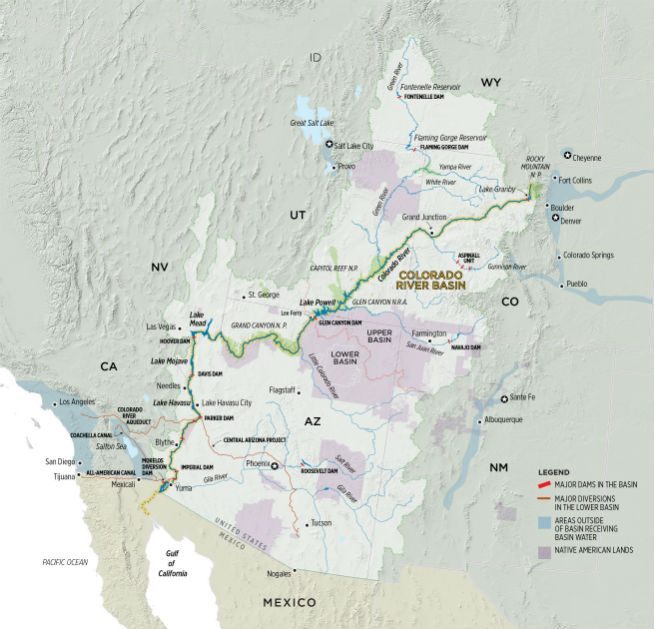 Whether a high-level meeting between an Arizona water agency and the four upper basin states earlier this week will help restart a critical drought contingency planning effort in the Colorado River Basin isn’t clear yet, officials said.

This despite an apology from Central Arizona Project managers for publicly discussing a strategy they were using to force more releases from the upper basin’s Lake Powell to fill its own Lake Mead, mining what it called the “sweet spot” in a set of guidelines used to jointly manage Powell and Mead, the largest reservoirs in the Colorado River Basin.

The CAP is one of the largest water providers in Arizona, one of the three lower basin states, and uses about 1.5 million acre-feet of Colorado River water to serve metropolitan Phoenix and Tucson and surrounding agricultural areas, according to the agency’s website. It is managed by the Central Arizona Water Conservation District (CAWCD).

But the upper basin states and some of their largest water utilities maintained that CAP’s actions were undermining their own water-saving efforts. Since 2015, the seven Colorado River Basin states have spent more than $11 million on a system conservation pilot program to reduce water use in the upper basin in order to boost storage in Lake Powell, according to a February report from the Colorado Water Conservation Board. The upper basin states, including Denver Water and other utilities, contributed $4.6 million to that pool.

“We wanted to get together to let them explain what their position had been,” said James Eklund, a Denver attorney who represents Colorado on the Upper Colorado River Commission.

“Typically we don’t get involved in any other states’ internal disputes,” Eklund said. “This one had bubbled into the rest of the [Colorado River] basin and it risked freezing the drought contingency planning that we’ve been working very hard on.”

The dispute comes in a year when Lake Powell is expected to receive only about 42 percent of its normal inflows, according to the May 1 report from the Colorado River Basin Forecast Center in Salt Lake City.

In a statement issued Tuesday, the Central Arizona district apologized for its public statements and for jeopardizing the drought work the seven states have undertaken.

“CAWCD regrets that intra-Arizona issues have impacted other parties in the Colorado River Basin,” the agency said in the statement. “Specifically, CAWCD regrets using language and representations that were insensitive to upper basin concerns, and resolves to have a more respectful and transparent dialogue in the future.”

Tom Alvey grows fruit in Delta County and chairs the Glenwood Springs-based Colorado River Water Conservation District Board. The district represents 15 West Slope counties and acts as the lead policy and planning agency for the river within the state of Colorado.

Alvey said the tension on the river won’t have an immediate impact on him or other water users.

“More than anything else, we’re concerned that it is an exercise in bad faith,” Alvey said. “Everybody up and down the river has put a lot of effort into developing a collaborative approach to problem solving.

“This flies in the face of that. It creates the impression that CAP is gaming the system. They are causing more water to be released out of Lake Powell. That’s our bank account and they are draining it.”

Looking ahead, Alvey said the interim guidelines governing the joint operation of Powell and Mead may need to be changed to prohibit the kinds of actions CAP has been taking. The guidelines, which date back to 2007, were negotiated after the federal government ordered the seven basin states

“The interim guidelines have served us fairly well,” Alvey said, “but they may need some tweaking.”

In response to the controversy, Denver Water has threatened to pull out of the system conservation pilot project. In a statement issued after the Salt Lake City confab, it said it would wait to see if CAP follows through on its promise to restart talks with the State of Arizona before it decides whether to continue helping fund the pilot program. The agency, the largest water provider in Colorado, spent just over $2 million on the project through 2017 and had committed another $2 million in funding for 2018, according to spokesman Travis Thompson.

The Board of Water Works of Pueblo, which relies on Colorado River Basin diversions from the Fryingpan-Arkansas Project, has gone one step further, saying it will no longer participate at all.

Eklund said it’s critical that CAP schedule a new round of talks with representatives for the State of Arizona so that the drought contingency planning can resume.

“We can’t have weeks go by before the next step is taken,” Eklund said. “We were optimistic we would have something done by now.”

Still, he said, “If CAP’s actions had gone unanswered it would have been a hard or impossible sell to our water users to convince them if we put [conserved] water in Lake Powell it’s not going to get pulled down to Lake Mead anyway.”

Jerd Smith is digital content editor at Water Education Colorado. She can be reached at @jerd_smith, jerd@yourwatercolorado.org or at 720-398-6474.