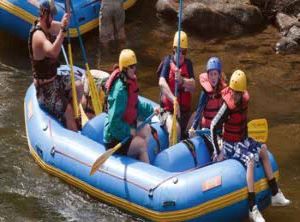 With 300-plus days of sunshine a year and a diverse geography of plains, mountains, canyons and rivers, Colorado has a distinct advantage when it comes to luring people outside. More than 75 percent of Coloradans-not to mention tourists from out of state-participate in some outdoor recreational activity every week, in locales ranging from urban greenways to wilderness areas, according to Colorado’s Statewide Comprehensive Outdoor Recreation Plan, known as SCORP.

Colorado’s relationship with the outdoors is partially responsible for the state’s current standing as the fittest in the nation-or “least obese”-as declared in June by the Trust for America’s Health. The financial benefits attributed to recreation are also telling. “Active recreation”-bicycling, backpacking, climbing, snow sports, paddling, trail running, hunting and fishing-contributes $10 billion a year to Colorado’s economy, according to the most recent assessment by the Outdoor Industry Foundation, completed in 2006. And the broader spectrum of recreation and tourism in Colorado is credited with generating $21.5 billion in sales in 2007-while agriculture was at $7.2 billion-out of statewide receipts totaling $450 billion, according to a 2009 report commissioned by the Front Range Water Council.

“Colorado, no matter how you look at it, is ahead of the game when it comes to getting people outdoors and recreating,” says Scott Babcock, strategic planning program manager for Colorado State Parks.

Yet the patter and tread of millions of feet and wheels and paddles poses a management challenge to recreation planners. Officials must protect natural resources and figure out how to accommodate all the different types of outdoor enthusiasts at a moment when Colorado’s population is growing and becoming more diverse. With demographic changes, residents’ interests and outdoor choices are changing, and land managers are heeding the trends.

Agencies are trying to accommodate fluctuating user demands by managing sites with certain activities in mind. Geocaching, an activity where hikers use handheld GPS units to find fixed caches, has become increasingly popular so State Forest and Cheyenne Mountain state parks now rent navigational devices. Other parks and natural areas focus services on mountain biking, cross-country skiing or off-road travel. “Parks can’t be all things for all people,” says Babcock, “so we try to account for local, regional and statewide recreational trends.”

Babcock is a lead author of the 2008 SCORP. The detailed report, released every five years, assesses the state’s recreational habits and needs and brings together recreation planning staff from federal, state, local, nonprofit and academic entities to consider use patterns in order to develop a vision for future outdoor activities.

According to SCORP, Colorado’s population growth has included late-career and retiring baby boomers who generally have plenty of disposable income and leisure time. The state is also accounting for greater diversity and ethnicity, especially an influx of Hispanic families. State and municipal parks and other public lands have seen increases in large, family-oriented picnics and events at dispersed camping areas, Babcock says, often at facilities designed for smaller groups.

Meanwhile, the “millennial” generation-defined by SCORP as people born between 1978 and 2003-is coming of age, and while they are generally less likely to participate in sports than previous generations, many youth are looking for “higher-intensity activities” that incorporate technology or adventure. “In general, Colorado still needs to do more to connect [certain] groups-inner-city kids, people of color, Hispanic families, and techno-savvy kids-to the outdoors,” says Babcock.

Some of the impetus comes from the White House itself. President Obama’s America’s Great Outdoors campaign, through the Department of the Interior, promotes reconnecting urban populations, particularly kids, with the outdoors, and Michelle Obama’s Let’s Move initiative also promotes outdoor activity for addressing childhood obesity.

Locally, some efforts are in place. Environmental Learning for Kids works with urban, “at-risk” children from metro Denver to foster connections with the outdoors and avoid potential pitfalls, such as recruitment into gangs. Since 1996, the program has reached more than 70,000 youth and their families, introducing environmental education and outdoor activities and helping them explore careers in natural resources. Groups like the Larimer County Youth Conservation Corps promote outdoor education curriculum in schools and campaign to make outside “cool,” with the idea that kids hooked early on the outdoors will grow up to be the next generation of conservationists.

Other entities rooted in conservation and outdoor recreation are altering their strategies and initiatives. Voters established Great Outdoors Colorado (GOCO) in 1992 to fund projects that preserve the state’s outdoor heritage using up to 50 percent of Colorado Lottery proceeds. In the last few years GOCO is seeing more requests to pay for parks, trails and linkages in urban areas, says Lise Aangeenbrug, GOCO’s executive director. In response, the GOCO board updated its strategic plan and funding priorities in early 2010 to include providing accessible recreational opportunities and environmental education and stewardship programs aimed at youth and families with little exposure to the outdoors.

Lest there be any confusion over the state’s changing recreation tastes, Colorado isn’t lacking for outdoor adventurers, and one only has to look up to the tallest peaks to see what resource managers are up against. No physical land features better define Colorado than its 54 summits above 14,000 feet, but in less than three decades “bagging” a fourteener has gone from being a distinguished and bold mountaineering feat to a typical weekend outing.

In 1984, about 60,000 hikers climbed a Colorado fourteener, according to the nonprofit Colorado Fourteeners Initiative. This year, more than half a million people will stand on the top of one. Some of the milder climbs close to the Front Range, such as Quandary Peak and mounts Lincoln and Democrat, attract lines of hikers on the weekends.

The nearly tenfold increase in use suggests that Colorado residents and visitors are taking full advantage of the state’s expansive public lands. So, even though passive outdoor experiences are most popular, active experiences such as hiking, fishing, skiing, bicycling and paddling each count hundreds of thousands and even millions of participants annually.

Federally managed public lands cover more than 24 million acres in Colorado, and nearly 5 million more acres are under the jurisdiction of the state, Indian tribes and local governments. Nonprofit land trusts, which can tap GOCO and private donors for funds, also protect lands through purchase or conservation easements and often offer recreational opportunities. In total, about 43 percent of the state is open to the public, and many popular ski mountains, river canyons, hunting areas and fourteeners are part of the public domain.

The U.S. Bureau of Land Management estimates that more than 5 million visitors recreate annually on BLM lands in Colorado, including areas that used to be generally ignored by outdoor enthusiasts with the exception of hunters. Now, use is increasing at roughly 3 to 5 percent every year, according to Jason Robertson, the BLM State Office Branch chief of social and cultural resources, and mountain bikers and off-roaders are replacing hunters.

Both the BLM and U.S. Forest Service are trying to meet 21st century goals and priorities that differ significantly from those of a few decades ago. Recreation has replaced cattle grazing, timber cutting and mining as the primary use of public lands, but different activities aren’t always compatible. In managing for potential conflicts, the federal agencies rely heavily on cooperative agreements with user groups, including the Colorado Mountain Club, Colorado River Outfitters Association, the Colorado Off-Highway Vehicle Coalition, and Bicycle Colorado, which help with educating users on trail and stream etiquette.

Babcock says Colorado State Parks, which has had to cut staff and manage with fewer operating funds, also relies on volunteers and “friends” groups to help with trail construction, weed control, and basic visitor services. In the future, both state and federal agencies may have to consider adding or raising fees for certain uses as well as charging for trail access. The Forest Service grabbed attention this past spring when it suggested it might start charging for access to four fourteeners in the Sangre de Cristo Mountains in order to offset and discourage resource damage from hikers.

Funding might not be keeping up with recreation trends, but managers are increasingly aware of the connection back to the state and local economies. After all, Colorado’s $10 billion recreation economy is hardly negligible.

Colorado State University resource economist Catherine Keske has determined that the average fourteener climber-be it a local or a tourist-spends $107 a day during an expedition on supplies, travel, lodging and food. Conservation groups and land managers hope the research, which relies on hiker surveys, helps build further support among communities where access to summits has been limited because of private land claims.

On BLM lands near Grand Junction and Fruita in western Colorado, mountain bikers from around the world flock to ride single track through the desert, and the budding recreation-based economy is not lost on managers considering where to provide access and activities. “We are trying to look at how uses we allow benefit local communities,” says Robertson.

The link between economy and recreation also holds true for more urban recreation areas, even when users are not traveling far to enjoy them. Jeff Shoemaker, executive director of the Denver-based Greenway Foundation, says, “We have a catchphrase: ‘Green equals green,’” referring to the correlation between providing open spaces for recreation and creating financial value.

Working with local governments and other partners, the Greenway Foundation has spent three and a half decades and $100 million to extend trails and parks along the South Platte River in metro Denver. Financial estimates indicate the investment has returned more than $10 billion in economic benefits to the region, while also creating recreational opportunities for people more inclined to stay close to home to enjoy the outdoors.

The foundation and others continue to fine-tune their vision for the growth of the South Platte greenway, relying heavily on public input and demographic data. Greenway planners are now focusing on maximizing different user experiences, from biking, kayaking or picnicking to fishing and rollerblading. Shoemaker also hopes to see future land-use planning along the South Platte include goals for the greenway such as adding more pocket parks and trail spurs as well as extending the greenway into industrial areas that are in the process of transitioning to mixed-use residential.

The planning team behind SCORP also sees integrating recreation into land-use planning as a priority-just as important as maintaining public health and fitness, managing environmental resources, coping with budget cuts, and providing diverse recreational opportunities. Whether the agenda involves transportation planning or oil and gas development, recreation managers want a seat at the table.

“We want to make sure that [industry and government] specialists in these other areas are aware of recreation,” says Babcock. “We want Colorado to remain a leader in outdoor recreation, and we also want to share our successes with other states.”