Ranching in the “midst” 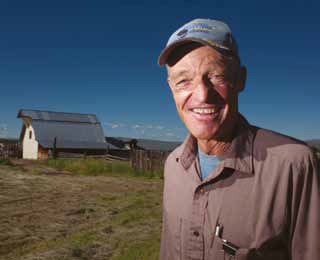 Bill Trampe, a third-generation Gunnison rancher, moves irrigation water off of hay fields near his family's farmstead outside Gunnison, Colo.

Bill Trampe knows he is one of few ranchers left in his corner of Gunnison County, near the East River and north of Almont, Colo. As others have sold to developers or moved to less-complicated pastures, those who remain carry on. “‘Till we’re plum out or we die,” he says.

A century after Illinois-born Henry Fredrick Trampe began the ranch, Trampe continues to work the land his grandfather cultivated. Born on the ranch, Trampe has run the day to day operations for 53 years. In that time, the local landscape-both physically and socially-has changed drastically, and Trampe questions what will happen to the ranch his family has run for three generations. He has no heirs. What he does know is that it will not be developed, as he committed the 978-acre property to conservation easements.

As condos and developments take the place of working operations, Trampe has found himself amidst a culture unaccustomed to ranch life, or-more disappointingly-a culture indifferent to ranch life. Rather than having neighbors who used to share the cost and know-how of fixing fences, it’s a new set of people with varying demands and impacts. “Your neighbors are city-dwellers that have a whole different lifestyle,” he explains, describing it as “trying to ranch in an urban setting.”

As the surrounding local economy transitions from agriculture- to recreation-based, the value of ranchlands surpasses the dollars cattle bring in at auction. A 2006 report from the Environment Colorado Research and Policy Center stated that 58 percent of Gunnison County tourists would limit their visits to the area if the farms and ranches were developed.

Despite the finding, Trampe finds neither camaraderie nor cooperation from local recreationists. Last summer as he worked up in the hills, he saw canoeists cutting down his fence across the river, rather than lifting the wire and passing below. Too distant to stop them, he watched helplessly, hoping his cattle wouldn’t get out to trespass on National Forest land and put his grazing permit under scrutiny. That afternoon, instead of working on irrigation, Trampe’s employee spent valuable hours repairing the fence.

Trampe observes a local sentiment that regards the cutting of his fence as “no big deal,” based on the presumption the recreation community can do whatever it wants, barring any blatant wrongdoing. “That’s what’s expected in our community, that agriculture will step aside and let recreation take the top rung.”

It’s not just the boaters, he says, but it’s also bicyclists leaving the gate open where his cows graze and ATVs tearing up his property. “What do I do?” Trampe asks, “My neighbors don’t give a hoot about how it affects me.”

Ranchers who form a united front seem to have an easier time with the changes. “There are pockets that are successful because they’ve banded together,” Trampe says, clarifying that it’s easier if a ranch borders fellow working properties. “My neighbors are not ranchers,” says Trampe, whose property abuts developments and the Crested Butte ski resort.

Regardless, the lifelong cattle rancher holds a deep connection with the land and resources in Gunnison County.

“The only reason we’re still here is because of our dedication to the resource, our attachment to the land,” he says. “It’s a dedication that I can’t explain.”

His dedication goes beyond sentiment. Trampe has served on water resource planning boards since 1976-the Upper Gunnison River Water Conservancy District board for 26 years, followed by the Colorado River District board, where he has represented Gunnison County since 2003. “Water is a resource that’s absolutely necessary in our desert climate,” Trampe explains.

In addition, Trampe co-founded an organization in 1996 to help preserve agricultural land with Susan Lohr, the former director of the Rocky Mountain Biological Laboratory. So far the Gunnison Ranchland Conservation Legacy has protected 16,535 acres of ranchlands in the Gunnison-Crested Butte area through conservation easements. The nonprofit facilitates the process for conservation-minded landowners, helping them obtain funding through organizations like Great Outdoors Colorado, which has invested $11.7 million in the effort, and assisting with legal and technical aspects of the transactions. Trampe says the process works well for ranching families experiencing generational changes: “People can recoup some of their value and guarantee agricultural use.”

The benefits expand beyond Gunnison County. According to a 2010 study by the Trust for Public Land, Coloradans reap roughly $6 in benefits for every $1 invested in efforts to keep agricultural land and other open spaces from being developed.

It also preserves contiguous ranchland. For example, various ranches along Tomichi Creek, just west of Crested Butte, have protected their land through the Gunnison Ranchland Conservation Legacy. “[Their] neighbors are gonna’ be ag-based from now on,” says Trampe.