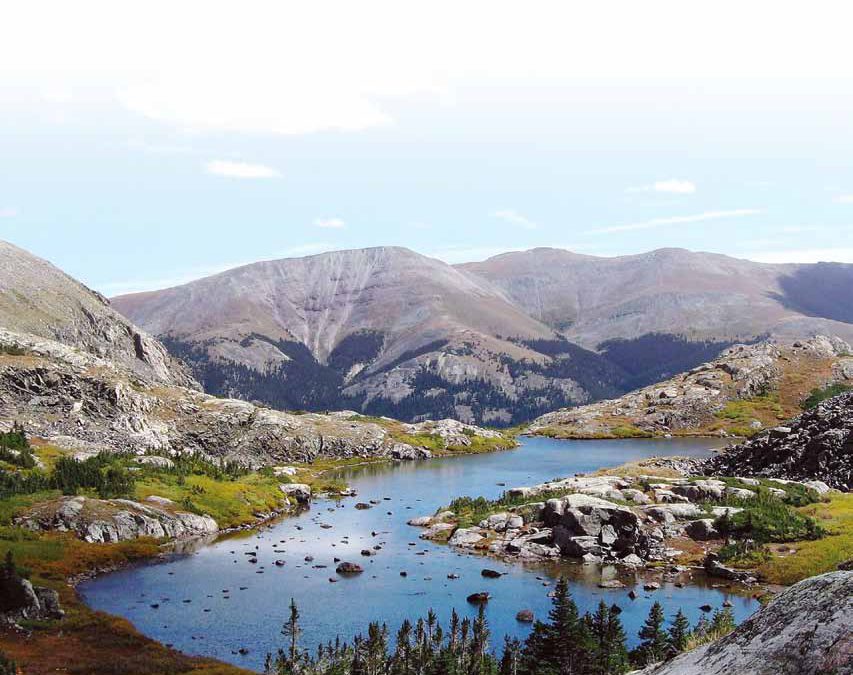 Near Breckenridge and Frisco, McCullough Gulch is part of the Hidden Gems campaign's proposed Tenmile wilderness area. The gulch is a popular destination for hikers in the summer and snowshoers in the winter. Photo by Lisa Smith.

To understand the controversy over the Hidden Gems wilderness campaign, you must first appreciate the nature of existing federal lands with wilderness designation. Since 1964, when Congress enacted the Wilderness Act, these set-aside lands have mostly been in the deepest backcountry, along the mountain spines, in places where rock faces abound and winter snows linger into summer. There are exceptions, such as where the Eagles Nest Wilderness Area lies cheek-and-jowl with residential neighborhoods in Vail and Summit County. But, for the most part, there are buffers between the frequent scurrying of people and these tracts that, by congressional definition, are “untrammeled by man” while retaining their “primeval character and influence.”The 40 Hidden Gems parcels, if designated by Congress, would shift the focus of wilderness in Colorado. These 335,000 acres west of the Continental Divide have been proposed by several conservation groups as an attempt to protect more ecologically critical land at lower elevations. Some argue that they have diluted wilderness character. Although 26 parcels are adjacent to existing wilderness areas, many are proximate to towns, roads and even highways. That’s where the fight comes in. 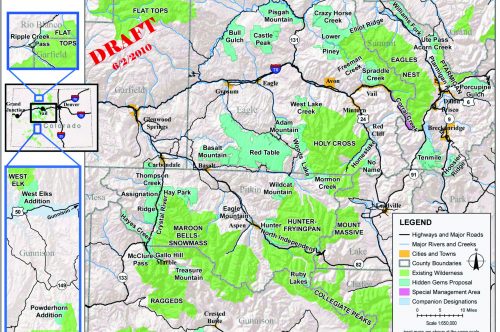 There’s nothing marginal about the value of these lands. Their proximity makes them even more valuable to a variety of users. Wilderness advocates say that’s exactly why Congress needs to protect them—against growing incursions of motorized and mechanized use as well as oil and gas exploration. We need more than rock-and-ice wilderness, they insist. We need a broader array of ecological systems insulated from the meddling of human activity. And Congress has explicitly stated that the sights and sounds of civilization aren’t enough to disqualify land for wilderness designation.

Wilderness designations rarely come without controversy. The Eagles Nest Wilderness, straddling the Gore Range north of Vail Pass, was created in 1976 with express language that gave Denver Water lingering authority to create water diversion canals. Aurora and Colorado Springs got the same overriding language in the 1980 legislation creating the Holy Cross Wilderness south of Avon. Mining potential has often been a sore spot. Four-wheelers have groused, and in recent years, mountain bikers and snowmobilers have contested wilderness, forcing accommodation of their passions. Those same sharp-edged issues can be seen in the new dialogue, but the proximity adds tension to the conversation.

Proposed for wilderness designation by the Hidden Gems campaign, the 55,385-acre Red Table area is dominated by Red Table Mountain, a sand-stone massif that stretches 18 miles, dividing the Eagle Creek and Fryingpan watersheds. The proposal’s boundaries were adjusted to address concerns of adjacent landowners, snowmobile clubs, ranchers and the town of Gypsum. Photo by Sloan Shoemaker.

The words, already hot, may get hotter if U.S. Rep. Jared Polis and U.S. Rep. John Salazar, in whose districts the proposed lands lie, agree to sponsor some or all of these parcels. On Aug. 6, Polis released what he’s calling a discussion draft of a bill to protect approximately 90,000 of the proposed Hidden Gems acres in Summit and Eagle counties as wilderness, with another 80,000 acres designated special management areas. As he continues to solicit public comment, Lara Cottingham, press secretary for Polis stressed, “The congressman is looking at making a lot of changes so that anything introduced suits the area and the people who live there.” Polis, she says, has no timeline. “The most important part is that we take our time and do this the right way.”

Depending on how you chart it, this wilderness proposal has already been decades in the making. Conservation groups, dissatisfied by how the Bureau of Land Management inventoried its holdings for wilderness suitability in the 1980s, compiled their own list. Portions of those BLM lands have been variously proposed by Colorado’s congressional delegation over the years, but consensus never developed. A few of the BLM lands identified long ago are part of the Hidden Gems proposal, including the red-rocked canyon country of Bull Gulch near Dotsero and the volcanic plug of Castle Peak, north of Eagle.

Most of the lands now under the microscope are managed by the U.S. Forest Service, and the bulk of them lie within the White River National Forest. Conservation groups a decade ago found 750,000 acres justified for wilderness consideration there, but in its 2002 forest management plan, the government agency identified only 82,000.

Several years ago, a coalition of conservation groups began more carefully shaping the Hidden Gems proposal. The coalition includes the Colorado Mountain Club, Colorado Environmental Coalition, and the Carbondale-based Wilderness Workshop, along with The Wilderness Society. Another 90-some organizations have signed on to support the coalition’s Hidden Gems campaign.

The lands the campaign has proposed create a large quilt. To glimpse them by car you might start from Kremmling, driving south to Silverthorne. On the left would be the Williams Fork Range, draped with a proposed wilderness dropping down nearly to Highway 9. Farther along are proposed additions to existing wilderness above Green Mountain Reservoir and above Silverthorne. Even the Continental Divide above the Eisenhower Tunnel Memorial Complex has a finger of wilderness, valued as a wildlife crossing over Interstate 70.

Some of the most spirited debate has been in the Eagle Valley, between Vail and Glenwood Canyon, where the issues are a microcosm of those found among the various proposals. Consider Red Table Mountain, a long ridge of sandstone nudging 12,000 feet and apparent to I-70 travelers south of Gypsum. On the north side, creeks tumble under a tight canopy of spruce and fir trees. The land arches steeply, and if taking a hike, you might call it nasty. Saws have been rare, trails and roads remain few. Red Table Mountain is wilderness with a lower-case “w.”

In 2002, the Forest Service recommended Red Table for wilderness designation and closed several roads, creating a wilderness study area. The land is also found within the Hidden Gems proposal. But Gypsum officials prefer lower-case wilderness. “It’s the best of both worlds,” says Jeff Shroll, the town manager. It’s being managed as wilderness, but with more flexibility. What Gypsum and other water providers fear are sediment problems like those Denver Water has battled at its reservoirs and water-treatment plants in the wake of Hayman and other fires in the South Platte drainage. They want motorized access to manage and protect the resource pre- and post-fire. Although, if a fire were to burn, Hidden Gems advocates maintain that ATVs and chainsaws would be permitted, in accordance with the Wilderness Act, to confront the emergency.

Recreational access has been another issue in Vail and the Eagle Valley. The Wilderness Act bans not only motorized but mechanized use, which is normally interpreted to include bicycles. That prohibition gets in the craw of mountain bikers, who see their impact as minimal. “Horses create the most damage,” insists John Bailey, a member of Eagle County’s EcoTrails Backcountry Committee who is involved professionally and avocationally in mountain biking. Bailey and other mountain bikers in the Vail area have endorsed several Hidden Gems parcels for wilderness, but in other cases want a national recreation area or some other type of land management designation that would allow continued access to existing roads and trails while limiting motorized incursions.

Even within the non-motorized recreation community, there are divisions. “They’re worse than Orvis fly fishermen,” fumes Bill Heicher, a retired wildlife biologist in Eagle. “Mountain bikers have this holier-than-thou attitude that they can do no environmental harm because they are mechanized and not motorized.”

Livestock grazers also disagree about the value of wilderness. The Colorado Cattlemen’s Association philosophically opposes such a designation. Paonia-based rancher Mark Roeber, who chairs the trade group’s Federal Lands Committee, says he and other grazers want to be able to use ATVs, motorcycles and trucks to manage their herds, fix fences and repair stock ponds. However, Gems advocates cite the support of several ranchers in the Carbondale and Redstone area, and also report support in the Eagle and Gunnison areas. Further, they point out that grazing is a specifically authorized use in wilderness areas, and although the act requires ranchers to use the least-disruptive tool, some motorized uses may be allowed, particularly if specific language is written into authorizing legislation.

The most basic disagreement has to do with whether the Forest Service, as a land-management agency, has either the resources or the resolve to protect federal lands from abuses. Roeber thinks the agency can do the job but needs flexibility. So does Scott Fitzwilliams, the White River National Forest supervisor, who disagrees with the bulk of the campaign’s proposals that go beyond the 82,000 acres initially recommended by his agency.

Because of its ban on chain saws and other motorized tools, wilderness designation makes trail construction and maintenance far more labor intensive—even while the Forest Service struggles to keep up with its existing workload. Fitzwilliams also contends that wilderness designation hinders the ability of the Forest Service to manage tracts of land where 80 percent of trees are dead or dying. Even the increase in motorized use that threatens the forest primeval will not automatically be better managed with substantial wilderness designation. In the absence of enforcement, education and signage, Fitzwilliams says,

“Wilderness is a line on a map.”

The person who helped draw many of those proposed lines is Sloan Shoemaker, executive director of the Wilderness Workshop and a prime architect of Hidden Gems. He says wilderness designation is important for precisely the same reasons many oppose it: “We commonly hear the statement that the Forest Service is just doing fine. ‘Leave it to them.’ We don’t have faith in that, because the Forest Service has a multiple-use mission.”

Recreation represents a broader, more pervasive threat. Population growth compounded by technological advances for mountain bikes, motorcycles and snowmobiles has loaded the dice. In 1983, mountain bikes were heavy, had no suspension systems, and had no more than 10 or 12 gears. “There was a limit to what you could do with it,” says Shoemaker.

“Imagine what it will be like 10 to 50 years from now, with more people and two more turns of the wheel of technological innovation—how much harder it will be to protect some of these places. [Hidden Gems] might be the last shot.”

Many compromises have already occurred. Hidden Gems retreated its wilderness boundary in many areas to exclude existing mountain bike and ATV trails as well as areas where there are significant fire and watershed concerns. Additional adjustments are inevitable with recreation groups, livestock grazers and water users vying for access on their terms.

As indicated by Polis’s discussion draft bill, the 335,000 acres proposed by Hidden Gems are far from a foregone conclusion. The intense whittling away is a process similar to the way wilderness-quality lands themselves continue to fall off the map.

The 1964 Congress empowered the nation to set aside wild spaces “where man himself is but a visitor who does not remain.” In the years since, wilderness has never been established without dissent. As individuals, we hate restraints.

But as a group, maybe we need them.