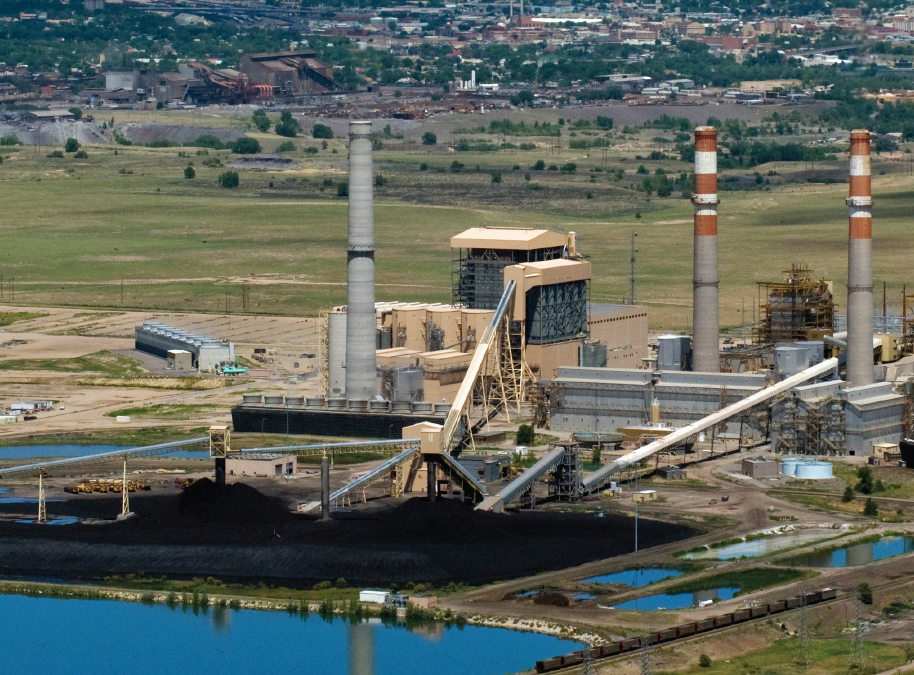 In Colorado, less than 0.5 percent of water tapped from rivers and aquifers is used for power generation. It seems insignificant, but here’s a look at water’s crucial role in Colorado’s power play.

When it comes to power generation, the reliance on fossil fuels and resulting air quality issues generally garners the most attention. However, here in arid Colorado it’s also important to understand how water fits into the power picture.

Thermoelectric power relies on heating water to create steam and then using that steam to spin turbines. The spinning turbines generate electricity. This part of the process is the same across all types of thermoelectric power plants. What varies is the type of fuel used to heat the water—coal, natural gas, nuclear, concentrating solar, even geothermal or biomass—and the water cooling method employed.

The water heated in the power generation process must be cooled in order to condense it from a vapor state back to liquid form before it can be reused by the plant or returned to its source.

“Upstream” water demands related to fuel choice impact overall water use as well. Coal, for example, which supplies 67 percent of Colorado’s electricity, requires 20 to 60 gallons per megawatt hour of electricity produced before it ever gets to the power plant, according to the U.S. Department of Energy. This water is used for mining, washing and transporting the coal. Developing natural gas requires 30 gallons per megawatt hour if hydraulic fracturing is used, or 5 gallons for conventional drilling. Natural gas currently supplies 20 percent of the state’s electricity.

Stacy Tellinghuisen, senior energy/water policy analyst at Western Resource Advocates, says Colorado’s energy sector is more water conscious than other parts of the nation. But given water scarcity and future drought issues, the power sector’s water needs must continue to be considered in decision-making. “Looking forward, with Colorado’s growing population and climate change, we need to keep in mind water demands as we make energy choices: ‘Are the water supplies there? Are we allowing flexibility in how we use water in the future?’”

Water use in Colorado is tallied in two ways—withdrawal and consumption. Withdrawal is how much a water user removes from a water source, some of it temporarily. And consumption is the amount of water “permanently” removed from the system, some of which evaporates into the atmosphere only to rain down somewhere else.

When it comes to generating power in Colorado, most plants consume the vast majority of the water they withdraw—90 percent on average. By comparison, agriculture, which withdraws nearly 200 times as much water as the state’s power plants, is 43 percent consumptive on average, according to Colorado’s Division of Water Resources.

Once-through systems, which cycle cooling water through only one time, withdraw the most water from natural sources, but consume less because most of the water used for cooling is later returned to the water source. Discharge temperatures, regulated on a per-plant basis by the Colorado Water Quality Control Division, must be low enough to protect fish and the environment, although they can still raise water temperatures by as much as 25 degrees Fahrenheit.

Closed-loop or recirculating systems, which use water to cool steam back into a liquid state before returning it to the steam cycle, withdraw less wa­ter but have a 70 to 80 percent consumption rate in Colorado, according to Xcel Energy. These are the most common systems employed here. These systems move water from the steam cycle through pipes called cooling towers, where a large volume of cool water falls over the tower, lowering the tem­perature of the water within before cycling it back into the system.

Finally, dry-cooled systems use no water, but rely on tremendous volumes of air current and require more energy to operate, trading lower water use for increased fuel consumption. These systems are also quite expensive to build and depend on ambient air temperature for efficiency—working great on cold days, less so in the heat of summer or in the desert. However, some facilities, including an Xcel plant in Pueblo, have installed hybrid systems that utilize water for cooling only when air temperatures are too high for dry cooling. Xcel says its new hybrid system cuts water consumption by 50 percent.