The Power of Ecosystem Services 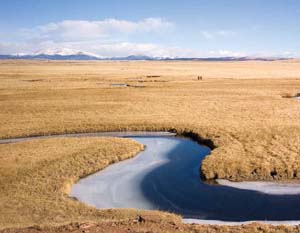 The south fork of the Platte River meanders through South Park, near Antero Reservoir in the 63 Ranch State Wildlife Area. Photo By: Kevin Moloney

Why conservationists are translating “environmental integrity” to read “human quality of life”.

The great wonder of the blue planet is that life is made possible. From forests that regulate the water cycle and the climate, to wetlands that cycle nutrients and act as natural filtration systems, to bats and butterflies and bees that pollinate crops that we harvest for food, the complex interactions that occur within living ecosystems provide essential services that directly support, not only our very existence, but our quality of life and our livelihoods as well.

While as a species, Homo sapiens have grasped at some level the need to harvest the Earth’s resources sustainably, to conserve biodiversity for future unknowns, and to stabilize the climate, the question remains: Have we truly accepted our utter dependence on the continued persistence of Earth’s divers ecosystems, in all their amazing complexity?

Although the concept of this dependence and the need to protect these natural systems for their related functions and values isn’t new, there is a growing cadre of natural and social scientists and economists who have joined forces to promote a slightly altered version of conservation, tapping an instinct greater than philanthropy or moral imperatives: that of human survival and well-being.

Groups like The Nature Conservancy, the largest conservation organization in the world, have already established projects worldwide related to investing in ecosystems for outcomes intended to benefit humans. In doing so, they are helping entities ranging from corporations to countries to choose policies and courses of action that take into account the tremendous value inherent in “natural capital,” a value that lacks recognition on traditional economic ledgers.

One prominent partnership in the field lists The Nature Conservancy, the World Wildlife Fund, the Woods Institute for the Environment at Stanford University and the University of Minnesota’s Institute on the Environment as members. Four years ago, they formed the Natural Capital Project, which aims to align economic forces with conservation. To encourage investment in nature, the Natural Capital Project is working on tools that would help quantify the value of that investment for a given community and calculate a foreseeable return. The aim is to help decision makers assess the tradeoffs related to competing land uses or management plans and their impacts to the environment, and ultimately, society.  It’s important because, so far, despite all of our great strides toward conservation, we haven’t successfully halted environmental degradation. And we haven’t identified the tipping points where ecosystems could suddenly cease to function in a life sustaining way.

According to the Millennium Ecosystem Assessment, completed in 2005 by a consortium of global  organizations, 60 percent of the 24 types of services it assessed globally have been degraded or used unsustainably, often times as a result of decisions made to increase another service, such as food production.  Members of the Natural Capital Project would argue that such losses represent the depletion of natural capital assets that could arguably be a better indicator of a nation’s future economic health than the traditional measure of its gross national product. So, a nation may register significant economic gains, but if it used its resources unsustainably to achieve that, the story is only half-told.

The Millennium Ecosystem Assessment was a vast report assessing the state of the world’s ecosystems and the consequences of their degradation on human well-being.  The assessment mainstreamed the term “ecosystem services” and defined four sub-categories of services, including provisioning services like food, water and timber; regulating services affecting climate, floods and water quality; cultural services such as recreation and aesthetic enjoyment; and supporting services including soil formation and nutrient cycling. Notably, the assessment did not consider human beings to be separate from ecosystems, but to be integral parts of them. So, humans are both the pawn and the chess player, directly and indirectly altering the environment through our actions, then reaping the consequences.

“If you’re going to do stream restoration, how do you value the habitat of that fishery?” – Eugene Backhaus

The fundamental issue according to John Sanderson, who co-directs The Nature Conservancy of Colorado’s Center for Conservation Science and Strategy, is that the value of ecosystem services is not internalized in our economic system.  Society doesn’t pay the true costs of using these services, at least not today, and not in cash. Future generations may be the ones who “pay” the consequences of today’s decisions when they inherit depleted fisheries, deforested watersheds or dewatered rivers. So far, government hasn’t resolved this discrepancy; many conservationists feel the U.S. regulatory framework for protecting the environment doesn’t come close to integrating the true value of ecosystems into resource development decisions.

Some argue that not only are many of the common pool resources provided by natural systems lacking mechanisms to generate the finances necessary to conserve them, but that humans, through urbanization and technology, are increasingly ignorant of—and even sheltered from—our dependence on them. Like the Slow Food movement that is re-connecting people to the sources of their food and inspiring awareness of how food choices affect the world, ecosystem service proponents want people to recognize that everything we use and value inherently comes from ecosystems. That recognition will help us get the balance sheet right in terms of our value system, says Rebecca Goldman, who previously served as The Nature Conservancy’s liaison to the Natural Capital Project and now works for the Washington, D.C.-based Inter-American Development Bank.  Then, “The onus is on policy makers to recognize the value and set up policies and mechanisms to help get that value expressed in our economic system,” says Sanderson. The ecosystem services framework that is being embraced by some scientists and conservationists is a move beyond traditional conservation arguments that point to the “intrinsic value” of an ecosystem—that it should be protected for the sake of its own existence. The shift has provided an entry point into conservation for new players, who have also brought along new sources of funding—both important goals of the movement.

While completing a doctorate in ecosystem services at Stanford University, Goldman performed an extensive analysis of 60 of The Nature Conservancy’s thousands of projects around the world. In comparing projects with traditional biodiversity conservation goals to those also incorporating an emphasis on ecosystem services, Goldman found that projects with the dual focus not only brought new types of landscapes into the fold—agricultural primarily—but also involved more stakeholders—private landowners—and received significantly greater funding from private, corporate sources.  The concept of promoting conservation as a “your life as you know it depends on this” activity makes sense. By pointing people—some of whom may not have embraced the intrinsic arguments—toward concrete, tangible services such as the provision of clean drinking water or flood protection, the motivation to protect healthy, functioning ecosystems should become more widespread. Given the breadth of affected people and entities, if that motivation can be translated into much-needed financing, it could affect every niche of resource management.

Ecosystem services occur at scales crossing, at the very least, private property lines and jurisdictional boundaries, and sometimes nations, continents, or, in the case of climate regulation, the globe. Thus, conservation scientists and practitioners see a need for thinking system-wide and implementing new policies and regulations to stem the tide of environmental degradation.  Both the beneficiaries of a service as well as those whose actions degrade it are currently being tapped as possible sources of payment to both protect and recover services. Some individual entities are moving in the same direction based on their own recognition of the potential consequences of inaction or the opportunity for green-marketing. Coca-Cola, for example, has worked with The Nature Conservancy to calculate its “water footprint,” the total water used in its Coke production process, all the way from the Dutch sugar beet farm to the can. The company will use the information to reduce its water consumption and offset its water use by returning water to ecosystems, similar to the consumer who voluntarily purchases carbon offset credits to atone for his or her portion of carbon emitted during a given activity, like flying cross-country.

Closer to home, the Natural Resources Conservation Service has worked for decades with Colorado’s agricultural community to promote good stewardship. It is now beginning to work on forested properties as well. Currently, the organization estimates it is working with 75 percent of private landowners in Colorado who are agricultural producers, all on a voluntary basis. By encouraging everything from no-till farming and crop rotation to protect soil productivity, to stream bank stabilization and restoration of riparian areas, the service exemplifies words spoken by its first chief, Hugh Hammond Bennett: “If we take care of the land, it will take care of us.”  But while the service is able to calculate an economic return on certain investments, like changing from conventional tillage to no-till, other values are, again, harder to estimate. “If you’re going to do stream restoration, how do you value the habitat of that fishery?” asks Eugene Backhaus, a natural resource management consultant from the agency’s Lakewood office. “Or if a catastrophic fire comes through, and we don’t get this work done, what is the lost value of that?”

As many of Colorado’s key water leaders continue to plod through the painstaking task of evaluating the state’s future water needs out to 2050, through the Colorado Water for the 21st Century process initiated five years ago by the state Legislature, the concept of ecosystem services hasn’t taken hold as forcefully as some would hope. When it comes to the value of water, its direct economic contributions measured in dollars and cents still favor the industries that extract, transfer and often consume the resource—everyone from municipal users to agricultural producers to breweries.  The value associated with the non-consumptive uses of water—whose beneficiaries include both native and sport fishes and the ecosystems they exist in, as well as towns and counties boasting scenic and recreational amenities—is much harder to quantify, but no less important to the livelihoods and lifestyles of Coloradans.

The opportunity to balance economic development related to the production value of water right alongside keeping water in rivers for the sake of ecosystem services, whether they be habitat-related or culturally important, is something Sanderson hopes will not be lost on the current water supply planning process. As hard as it may be to capture the true cultural and aesthetic value of protecting water in rivers, Sanderson believes “we need to be thinking long term about what we really value about Colorado and trying to make sure we don’t sacrifice this tremendous, unquantifiable value for short-term economic gain.”  As the science of ecosystems continues to mature, those holding the microscope only become more awed by, even baffled by, Mother Nature’s grand complexity. And the truths we embrace in a given time period may unravel as that time passes and the consequences of our actions unfold. “We think we’re managing for one outcome that we think today is a very good outcome,” explains Sanderson. “And then in fifty years, we realize, ‘Oops.’”

Such mistakes, whether due to misunderstanding, judgment errors or skewed priorities, may or may not be reversible. Substituting a degraded ecosystem service with a technological solution, the concept of fungibility, is not always possible. Better to maintain nature’s services, says Goldman, by giving people the option to make choices based on full knowledge and recognition of where everything’s coming from. “Ecosystem services are just one way of demonstrating nature’s values,” says Goldman. “Ecosystems have all been modified to some extent. But the more we can maintain their component pieces, I think the greater chance we have of those ecosystems surviving into the future, particularly with the unpredictable impacts from climate change.”