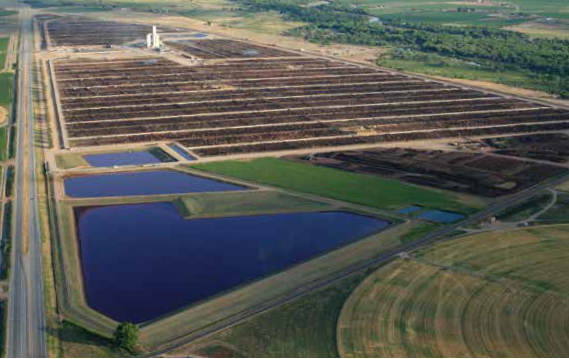 The Five Rivers Cattle Feeding division of JBS recently invested $18 million to upgrade its 90,000-cow Kuner feedlot near Kersey, earning a nod from the U.S. Environmental Protection Agency which called it “the feedlot of the future.” Five Rivers estimates a water-recycling system it built into the new design for filling troughs and keeping them from freezing saves 20 million gallons per year. Photo By: Paul Nielson/Down to Earth Aerial Photography

Livestock is the lifeblood of Colorado’s agricultural industry, and nowhere is that more apparent than on the state’s Eastern Plains. More than 60 percent of Colorado’s agricultural revenues come from the state’s 2.65 million head of cattle, of which more than 2 million are located in the eastern half of the state. Most of those animals are first raised by ranchers on the plains, then bulked up in huge feedlots owned by big agnames like JBS in LaSalle, Kersey, Yuma and Lamar and Cargill in Eckley.

A majority of the irrigated crops grown on the Eastern Plains go to feed these cattle, in addition to the state’s 130,000 dairy cows, many of which supply dairy processing plants like the one owned by Denver-based Leprino Foods in Greeley, says Bill Midcap, director of external affairs for the Rocky Mountain Farmers Union.

The end products of the region’s livestock industryare sold all over the United States and beyond, with Colorado ranking as the country’s fourth-largest beef exporter. According to the U.S. Department of Agriculture’s agricultural census, the total value of all the livestock, poultry and related products in Colorado’s 24 Eastern Plains counties topped $4.8 billion in 2012. “People need to realize that life doesn’t end 100 miles from the Front Range,” says Richard Holtorf, a rancher in Akron.

But the drought conditions that have gripped southeastern Colorado since 2008 have left the industry in a bind. With minimal precipitation, and surface and groundwater levels dropping in the rangelands, there’s not enough to provide the 20 to 30 gallons of water a 1,200-pound grazing cow needs to drink each day, not to mention nourishment for the 25 to 50 daily pounds of forage it requires, says Holtorf. In the past year, he’s had to purchase a tanker truck to haul thousands of gallons of water a week to various parts of his nearly 10,000-acre ranch. And with agricultural operations becoming increasingly specialized, most modern cattle operations don’t have their own farms from which they can obtain feed crops; to supplement dwindling forage ranchers have to buy more feed from others. “In the western United States, if you don’t have water and you don’t have forage, you can’t support livestock,” says Holtorf.

Many struggling ranchers have been forced to sell off some cattle or liquidate their herds, producing an economic effect that is compounded for years, adds Holtorf. “You have to regenerate your base, and that takes time,” he says. “A cow takes over two and a half years to go from birth to meat production.” The dwindling cattle supply is being felt in the feedlots, says Brad Rock of Box Elder Ranch, a farm and feedlot in Wray. “We’ve never seen cattle prices as high as they are,” says Rock. It’s a plus for those selling, but to stock his lot, Rock has paid 40 to 50 percent higher prices for a 500-pound calf in 2014 than he did in early 2013. He adds that hay prices, thanks to drought conditions, were costly at over $200 a ton earlier in 2014—although that fell off by more than half later in the season. Either way, it wasn’t as bad as it was in 2012, when prices reached $300 a ton.

Ranchers and feedlots aren’t the only businesses feeling the crunch, says Rock: “There’s not as much feed being bought at the feed stores; there’s not as much fuel being purchased to take care of cows; and the sale barns aren’t getting commissions.” The lack of beef supply also leads to higher meat prices in the supermarket.

The feed industry hasn’t been impacted as dramatically, points out Midcap, because farmers are shipping their hay, corn, and other feed crops to livestock operations in other states. Ranchers and feedlot owners are adapting to the times, says Rock, implementing new groundwater monitoring systems, installing additional water storage tanks, and developing more efficient grazing methods. But these efforts likely won’t be enough, meaning communities are going to have to look at large-scale water transportation and storage systems for the sake of livestock, in addition to securing new water supplies. If unsuccessful, the business will either dwindle, or become consolidated into large-scale operations that can handle the cost of providing water to livestock—adding to the corporatization that has already transformed beef’s feeding and meat-packing industries in Colorado and beyond.

Midcap knows some people might balk at the idea of allocating water for livestock that could otherwise be going to people. But as he points out, agricultural water ends up in people’s homes anyway. “Agriculture is not the end use of water,” he says. “As you eat food, you are eating the water that produced that food.”