These Hay Fields May Know How to Save the Colorado River 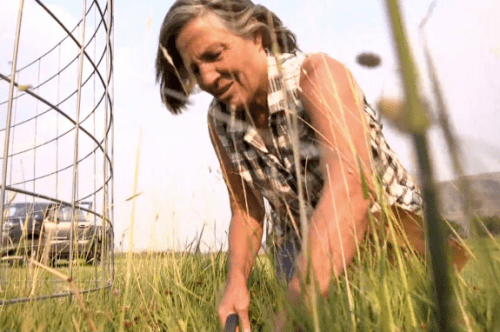 Research technician and Grand County rancher Wendy Thompson collects hay samples as part of a far-reaching experiment to see if ranchers can fallow hay meadows and conserve more water for the Colorado River.

Grand County rancher Paul Bruchez stands in a field near Kremmling, twirling a tuft of hay between his fingertips, seeing how quickly it disintegrates after a summer without water.

The plant, known as timothy, is native to Colorado and feeds thousands of cattle here in the upper Colorado River Basin.

This hay species and others are being closely watched this year as part of a far-reaching $1 million science experiment designed to see if ranchers can take water off of hay fields and measure how much was removed, how much evaporated, and how much was used by plants. They also need to know how this reduced irrigation affects the hay’s nutritional value.

If certain hay species retain more nutrients than others while on low-water diets, then ranchers know their cattle will continue to eat well as they evaluate whether their ranches can operate on less H20—not all the time, but perhaps every two to three years.

Any water saved could be left in the Colorado River, allowing it to become more sustainable in the face of aridification. Agriculture uses some 80 percent of the water in the seven-state Colorado River Basin, with hay meadows among the basin’s largest water users.

Last year, a historic Colorado River agreement, the Drought Contingency Plan, authorized a new drought pool in Lake Powell. Now Colorado, Utah, Wyoming and New Mexico, the four upper basin states, are studying whether they can or should save enough water to fill that drought pool. The pool, authorized at 500,000 acre-feet, is intended as further insurance that the upper basin won’t be forced to involuntarily reduce water use under the terms of the Colorado River Compact. Colorado expects it would need to provide roughly half the water for the drought pool, and, led by the Colorado Water Conservation Board, is working out difficult questions about how that water could be saved and ushered downstream to Lake Powell under a possible voluntary program known as demand management.

This project could begin to provide some answers. Similar experiments on five or 10 acres have been done, but this one, by comparison, is vast in scale, involving 1,200 acres, nine ranch families, a team of researchers across Colorado, Utah and Nevada, and the backing of powerful water groups, farm interests, and environmentalists. The three-year project is funded by the state and several environmental groups.

“We’ve never had a project this large in the state of Colorado,” says Perry Cabot, a Colorado State University researcher who is the lead scientist on the project (and serves on the Water Education Colorado Board of Trustees).

The data collected will help ranchers see if they can afford to participate in conservation efforts, based on compensation offered, and will allow researchers to better understand what works on the ground. It will also provide insight into any political problems that will have to be solved, as well as how much money could be needed to make large-scale conservation on the Colorado River feasible.

Cabot and his team have number crunching to do, but early estimates indicate that the ranchers may have saved 1,500-2,500 acre-feet of water this year. If this process can be replicated, scientists and ranchers could begin to see how long it might take to fill the 500,000 acre-foot drought pool at Lake Powell.