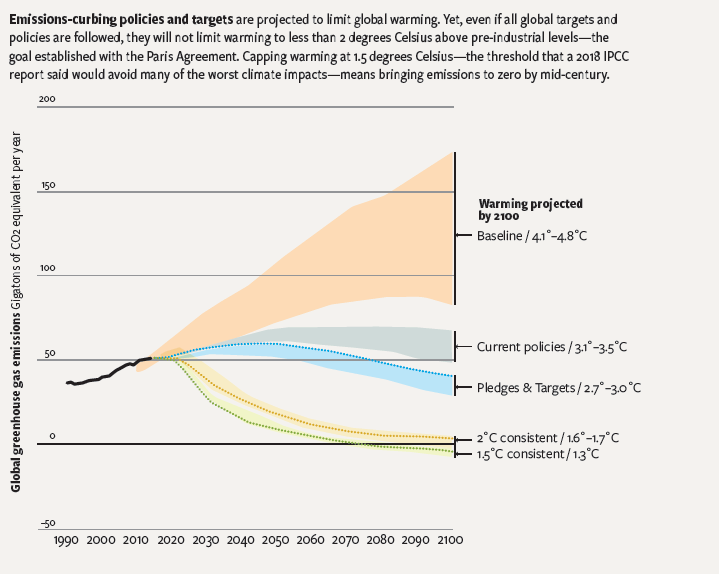 In September 2018, thousands of people gathered in San Francisco for a first-of-its-kind Global Climate Action Summit. Never before had an international climate meeting focused on the involvement and commitments of local leaders, businesses and State governments. In the run-up to the summit, California’s then-Governor Jerry Brown signed a bill that will require the state to source 100 percent of its electricity from zero-carbon sources by 2045. Over the past two years, more than 70 other cities around the world have made pledges to buy enough renewable power to offset their electricity consumption on varying timelines. In July 2018, Denver Mayor Michael Hancock announced that the city’s electrical grid would go 100 percent renewable by 2030.

Such locally-spearheaded efforts are meant to lessen the impact of the United States’ plan to pull out of the Paris Agreement in 2020. When the Paris Agreement was developed in 2015, the U.S. had pledged to reduce its emissions nationally to limit global warming to below 2 degrees Celsius (3.6 degrees Fahrenheit) above pre-industrial levels. Now, cities, states and regions are feeling the impacts of warming and urgently setting their own emissions reduction targets.

On June 1, 2017, the day that the United States announced its intention to pull out of the Paris Agreement, 10 state governors formed the U.S. Climate Alliance. Then-Governor John Hickenlooper signed on a month later. The U.S. Climate Alliance now includes 21 governors and is continuing work on climate action, regardless of national directives, with the aim of implementing policies that will reduce greenhouse gas emissions by 26 to 28 percent below 2005 levels by 2025. The alliance also serves as a watchdog, tracking and reporting progress in the United States to the global community. Not unlike the Green Climate Fund, the financial arm of the United Nations Framework Convention on Climate Change (UNFCCC), the U.S. Climate Alliance is creating its own “green banks” to finance clean energy opportunities. New York Governor Andrew Cuomo announced in September 2017 that their NY Green Bank would raise $1 billion of private capital to stimulate clean energy investment across alliance states and beyond. Now the green bank concept is coming to Colorado—in December 2018 the state announced the launch of its nonprofit Colorado Clean Energy Fund to learn from New York’s model and accelerate clean energy project development.

In Bonn, Germany at COP23 in 2017—the 23rd annual Conferences of the Parties to the 1992 UNFCCC—the U.S. Climate Alliance launched the North American Climate Leadership Dialogue. And at the September 2018 Global Action Climate Summit, the alliance announced plans to bolster carbon sequestration through the protection of the nation’s forests, and to reduce short-lived climate pollutants, such as methane, black carbon, and hydrofluorocarbons. Though spirits were high in San Francisco, and hope tangible in the air, less than a month later it was clear local action wouldn’t be enough.

The Intergovernmental Panel on Climate Change (IPCC) issued a dire report in October 2018 concluding that even if every nation met their current Paris pledge—most have fallen far behind on their goal—the Earth will still warm by more than 3 degrees Celsius (5.4 degrees Fahrenheit) by the end of this century. The report declared that at our current rate of emissions, we can expect to see 1.5 degrees Celsius (2.7 degrees Fahrenheit) of warming as early as 2030. Based on that outlook, the Paris Agreement, once seen as a framework to inspire joint international action over time, would likely prove inadequate without sudden and sincere action by all major greenhouse gas emitters. According to a 2018 report by Yale and the New Climate Institute, Global Climate Action From Cities, Regions, and Businesses, even local action is unlikely to make up the gap. The report’s evaluation of climate change pledges from nearly 6,000 cities, states and regions around the world found that, even if targets were met they would fall significantly short of catastrophic warming thresholds.

The repercussions of today’s warming temperatures have already manifested as extreme climate signals in global waters. In the United States, the U.S.’s Fourth National Climate Assessment, released in November 2018, reported that our country is already contending with devastating hurricanes, rising seas, and torrential downpours. Take 2017’s Hurricane Harvey, the second-costliest disaster in the country’s history at $125 billion, which brought more than five feet of rainfall in just a few days.

Ahead of COP24, the most recent UNFCCC talks that were held in Katowice, Poland in December 2018, many local leaders were hopeful that the IPCC’s October 2018 report would spur governments to agree to higher emissions reduction targets. Although COP24 did not yield additional pledges to reduce emissions ahead of 2020, when pledges will be required, it did produce a new rulebook that requires every signatory country to follow a uniform set of standards for measuring their planet-warming emissions and tracking their climate policies. The United States, though it still plans to pull out next year, agreed to the deal. As the U.S. Fourth National Climate Assessment says, if carbon emissions continue unabated, these negative environmental impacts will only get worse.