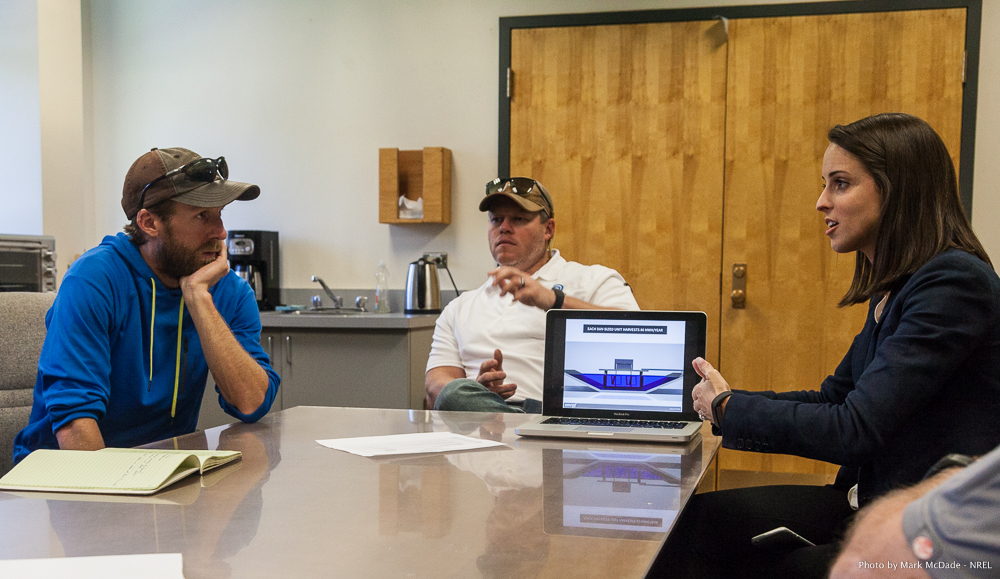 How an entrepreneur’s vision might change the water grid

Emily Morris is about to make Atlanta’s water grid a source for its power grid.

As this spring ends, the city plans to unveil a concrete box at its Hemphill water treatment plant, connected on either end to the city’s water supply. A current will flow through the box all day, small but steady—enough to push its turbine blades.

Morris’ start-up, Emrgy Hydro, has innovated on technology meant to propel submarines and built a smaller, more reliable hydropower generator. Weighing 800 pounds, plus its concrete casing, it should fit easily into a room of Atlanta’s oldest operating water plant.

With the unveiling, the Hemphill plant will join a handful of facilities in the United States equipped to harvest electricity from the flow of a municipal water supply. It will be the first real-life test of Morris’ product, which promises to generate the energy equivalence of seven average U.S. homes. Morris also is deep in negotiations for a second deployment with a major Colorado utility.

The heart of the business is its intellectual property: a magnetic gear system that expands on technological development once pursued by the Office of Naval Research. If it works, it could place Emrgy at the heart of the “micro hydro” movement.

“It’s not a big market right now, but the opportunity is huge,” says Abhirabh Basu, a research associate who studies water technology for Lux Research, referring to electricity generation from municipal water. Basu thinks generators like Emrgy’s could power sensors and pumps that make the grid smarter, more efficient and more robust. “This would be something that’s self-sustainable. It can be powered from the water—it’s something that looks very much like common sense. Why wouldn’t you want that?”

The applications may be even greater in the long term. Micro hydro could tap once-ignored flows and grow the country’s hydropower capacity for the first time since the 1980s. The barriers to innovation are high, but the potential applications range from rural electricity stations to a more efficient urban grid.

As of April 2016, Morris is a time-strapped business owner, balancing investors’ demands as she races toward an unveiling ceremony. She has been sprinting to lock down the first round of investor funding for the two-year-old company. It has been a crazy couple weeks—but it’s about to pay off.

“Any minute now, I can check the bank,” she says. She’s expecting funds from the New Belgium Family Foundation and Village Capital to appear in her bank account, and the rest of the round should follow, totaling about $650,000 of investments.

This marks a crucial moment for Emrgy Hydro. The company’s early phases were funded almost entirely by $1.6 million in federal grants, much of it from the Department of Energy’s low-impact hydropower initiative. That’s not uncommon: Water start-ups remain reliant on government funding because venture capitalists have shown little interest in the world of water.

“Last year, there were 39 [water-related] venture deals for $44 million,” says Scott Mosley, director of investment strategies for The Water Council, citing PitchBook data. “That’s a drop in the bucket.” In 2015, total investment in water startups amounted to just 2.2 percent of the broader clean-tech category, and only 0.07 percent of all startups.

The reason? Water is a complicated, slow-moving industry governed by countless regulations. Even companies with experience in other renewable resources are hesitant. But new pathways to innovation still are emerging, and Morris is finding them. Economic development organizations for water, such as The Water Council, have multiplied in the last decade. Basu counts more than a dozen now, and says that the utilities also are showing more interest in testing and buying new technology.

This shift is driven in large part by the new threats and demands that strain water supplies. “The reason why this hasn’t really taken off, necessarily, is that utilities don’t like to take on a lot of risk,” Basu says. “But when there are water shortages, the price of delivering water increases. If you’re using a new technology, and it improves efficiency—in the long run, that’ll pay off.”

Despite the market’s obstacles, Emrgy’s product already faces competition. Companies like Rentricity, LucidEnergy and Hydrospin all offer ways to draw electricity from municipal pipes. All of them are trying to convince utility managers that their products can be easily deployed—and that they won’t harm the existing system.

Morris says her company’s ace is its technology. Emrgy generators are built around a frictionless driveshaft, with energy transferred by magnetic force rather than the physical connection of gears. The National Renewable Energy Lab has named magnetic gears a top priority, but notes that they have seen “little to no manufacturing and research and development” activity in the United States.

Morris first encountered the technology in her work as a manager at a government contractor. The contractor, AMT, made significant progress on a project sponsored by the Office of Naval Research before shelving the technology.

As the years passed, Morris realized that all the potential she once saw was gathering dust. So she decided in 2014 to take it off the shelf. She formed an LLC, acquired the nascent technology from her former employer, and has since turned the research into a full-fledged product. Ultimately, her magnetic gearbox allows a small generator to harvest low flows without the maintenance issues of a traditional gearing system, she says.

Morris sees applications in pipes and rivers, or even in wind turbines, but she deliberately chose utilities as a starting point. “As regulated as municipal water authorities are, they’re faster and more achievable than going out into the broader network of watersheds and rivers,” she says. “These waters, you actually know who owns them, and you know who has jurisdiction over them—and they are a group that can routinely purchase equipment.”

In fact, utilities all over the country already employ devices to reduce pressure in water pipelines; at $40,000 each, Emrgy’s units could allow them to earn a return on the investment made to bring down that pressure.

Real success, however, will depend on how this summer’s pilot goes—and how well Emrgy’s technology stands up to its competitors. “She can’t just do two times better, or three times better. She has to be 10 times better,” Mosley says. “You’ve got to have radical breakthrough technology, a partner who’s willing to site the technology and let you demo it—and you need somebody with a checkbook.”

Innovation, in other words, takes more than good ideas.