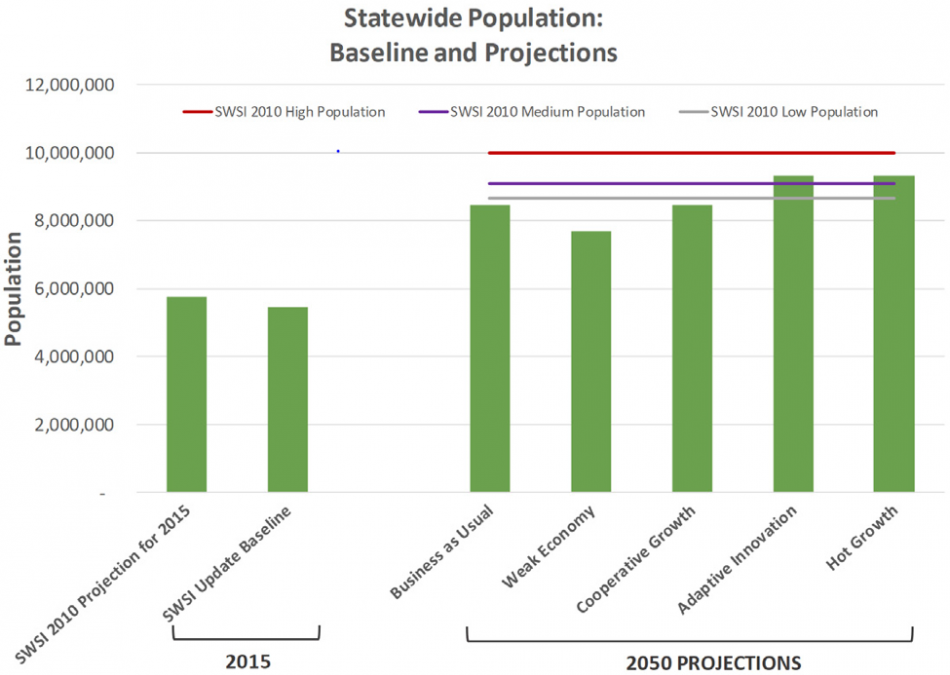 In 2002 an unprecedented drought struck Colorado. It spurred water shortages across the entire state, but while state officials scrambled to stave off an even bigger water crisis in the future, they quickly found that they lacked critical information to do the job. This realization led to the Statewide Water Supply Initiative (SWSI), an analysis of water data for the state of Colorado.

There have now been three SWSI reports, with each one bringing in new data to form a picture of water use in the state. The report was last updated in 2010, prior to the completion of the Colorado Water Plan. As directed in the water plan, the Colorado Water Conservation Board (CWCB) began working on the latest study in 2016 and plans to release the report on July 18, 2019 with a revamped design and reams of new data.

The redesign extends all the way down to the report’s format, which will be delivered as a “technical update” within the Colorado Water Plan rather than a stand-alone report like past SWSIs. According to Greg Johnson, chief of the CWCB’s Water Supply Planning Section (and a Water Education Colorado board member), this rebranding of SWSI is an effort to integrate all aspects of statewide water planning and make the data more publicly accessible.

Although Colorado’s population has grown, population projections have decreased in comparison to the 2010 Statewide Water Supply Initiative analysis. The 2019 SWSI update, or technical update, will use these updated population numbers to determine future shortages.

Aside from its delivery, the biggest change in the technical update will be its use of scenario planning to show different possible water futures in Colorado. Previous work by the Basin Roundtables and Interbasin Compact Committee, which includes representatives from each roundtable, resulted in the selection of five possible scenarios that could play out in Colorado’s future. For the technical update, the team at CWCB and its Technical Advisory Groups, comprised of local water representatives and technical experts, built out those scenarios with data, considering different variables that could affect water use in the state. These variables included things like population growth, climate change and even how much the future public will value conservation.

The report also includes updated population projections from the State Demography Office. The population projections were lower than what was included in SWSI 2010 and may lead to a slight decline in the projected future gap between supply and demand in some of the report’s scenarios. The plan will also include a swath of new data that was collected through House Bill 1051, which required large water providers to report water use and conservation data to the state starting in 2014.

“Generally, the water supply gaps are shaking out to be pretty similar to where they were in the past,” Johnson says. “We just have a whole lot more nuance.”

With more refined projections in hand, the CWCB plans to move immediately from producing the state-level technical update to working with stakeholders regionally through Basin Roundtables to update their Basin Implementation Plans. To assist with planning projects on a local scale, the CWCB has included a financial planning tool within the technical update that can give water planners a rough estimate of the costs for possible water projects. The roundtables can use this information to start making firmer plans for addressing their communities’ future water needs.