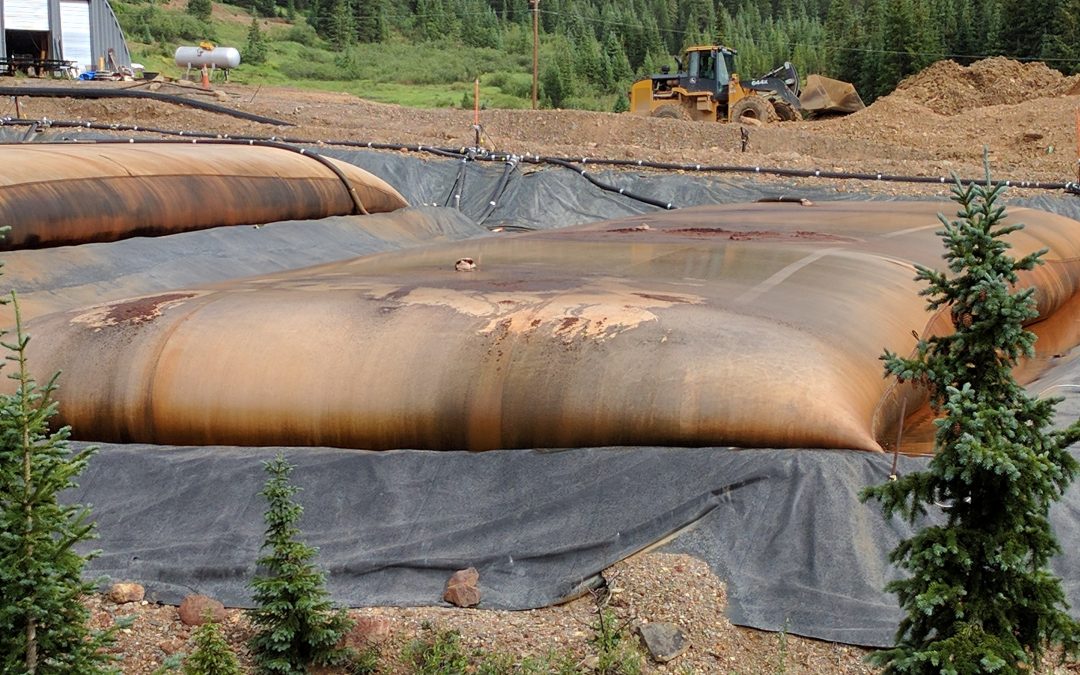 Gold King Superfund Cleanup: It costs the EPA around $20,000 a week to filter toxic metals out of the discharge spewing from the Gold King Mine near Silverton, Colorado. Photo by Maeve Conran

It’s been over 3 years since the Animas River near Durango in Southern Colorado turned orange as a result of the release of toxic chemicals from a local mine. Hannah Leigh Myers reports as part of our ongoing series, Connecting the Drops, the Gold King Mine spill may be inspiring the policy changes experts looking to clean up abandoned mines have advocated for for more than a decade. Read the transcript here. 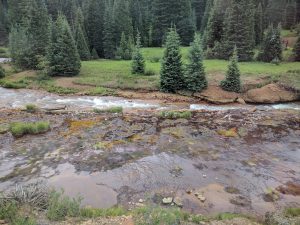 Gold King is one of 48 mines degrading water quality in streams throughout the Bonita Peak Mining District, now a designated EPA Superfund site.

On August 5, 2015, an Environmental Protection Agency worker took video after his team accidentally triggered the release of three million gallons of acidic mine waste into the upper Animas River.

Visit the Gold King Mine today and the scene seems far more under control. The EPA built a Superfund water treatment facility at the bottom of this gulch where large bags filter out metals like iron, lead, and zinc from the water. Locals say they are seeing signs that it’s working.

However, the EPA says it is costing about $20,000 a week. That cost is a fraction of a larger problem.

For decades, locals and water experts have tried to bring attention to how old, abandoned hard rock mines are deteriorating aquatic ecosystems, leaching naturally occurring minerals into waterways at an unnatural rate and in unnatural quantities.

Some locals like Rob Schmidt, a manager at Durangler’s Fly Shop in downstream Durango, say they’re grateful the Gold King Mine is drawing attention to the scale of the orphan mine pollution problem.

The Natural Resources Defense Council reports abandoned mines in Colorado leak the equivalent of a Gold King Mine spill into local waterways every two days.

According to Jeff Graves, director of the Inactive Mine Reclamation Program for the Colorado Department of Natural Resources Division of Reclamation, there are thousands of miles of abandoned mine sites in the Colorado Rockies.

“We’ve thrown around the number of about 23,000 sites throughout Colorado. That’s probably an underestimation.”

Graves says the state-run mine cleanup projects he directs are quite different from the Superfund cleanup project the EPA is conducting at Gold King.

“Superfund is big. Big program, big money, big authority, EPA, big contractors. Most of the work we do is partnership oriented and so we will have multiple agencies generally limited in resource and limited in scope. We did three water quality improvement projects last year. It’s on the order of three to six sites a year that get worked on and that may not be full-scale reclamation. It may just be a portion of reclamation. It’s a gargantuan gap between the potential problem and the amount of resources available to deal with it. So any opportunity we have to bring more partners to the table gets us one step closer to cleaning up a site.” Graves explains.

And central to bringing more partners to the orphan mine cleanup table is Good Samaritan legislation.

Well before the Gold King Mine spill rattled his community, Ty Churchwell, Trout Unlimited’s San Juan Mountains Coordinator joined T.U.’s near-fifteen-year battle to make it possible for so-called Good Samaritans to help clean up old, polluting mines when the property owner is either unknown or incapable of funding the cleanup process.

“Good Samaritan legislation would allow others, such as a watershed group or nonprofit, or a state agency or a county government to address a draining mine in their community that may not be on the radar with the EPA due to its possibly smaller size,“ explains Churchwell.

Good Samaritan legislation would make cleanup collaboration possible by addressing the obstacle everyone seems to agree is the most significant roadblock, liability. That liability stems from federal laws aimed at protecting water quality, most notably, the Clean Water Act.

“In order for a good Samaritan to come in and address one of these mines they would have to apply for and receive a discharge permit and as such, they would be responsible for that mine discharge that they did not create. They would be responsible for it forever and ever because that mine will never stop draining. And that’s part of the disincentive. That’s the liability we need to get over in terms of providing a mechanism for a Good Samaritan to go in and clean up a mine,” Churchwell says.

The EPA has been piloting Good Sam cleanup projects for quite some time. On December 6th, 2018 Colorado lawmakers Congressman Scott Tipton and Senator Cory Gardner introduced the Good Samaritan Remediation of Orphan Hardrock Mines Act of 2018 in the U.S. Senate and the House. It’s the most recent in a long list of well over a dozen proposed Good Samaritan bills.

Even though all parties involved seem to agree on the necessity of formal Good Samaritan protections, lack of agreement between environmentalist and industry representatives over the details, with one side saying the proposed legislation goes too far and the other saying it doesn’t go far enough, have sabotaged every Good Samaritan bill proposed to date.

But Jason Willis, mine restoration project manager for Trout Unlimited and a leader in the push for Good Samaritan legislation says there’s a better reason to reach an agreement and pass a Good Samaritan bill now than ever before.

“As the population of our state is growing and is expected to double by 2050, per the Colorado Water Plan, the nexus between water quantity and water quality is going to become even more important. So, some of these streams that are being negatively affected by abandoned historic mines, it’s going to be more important to clean those up so we have more clean, usable water for all the users that might need it in the next 20 to 30 years.”

Colorado’s hardrock mining boom between 1870 and 1930 played a key role in populating the American West and making Colorado the state it is today. State lawmakers, environmental groups, industry supporters, and government leaders are going to need to take big strides together towards reverse the damage Colorado’s historic abandoned mines continue to cause and make way for a new era in Colorado history that prioritizes clean water.