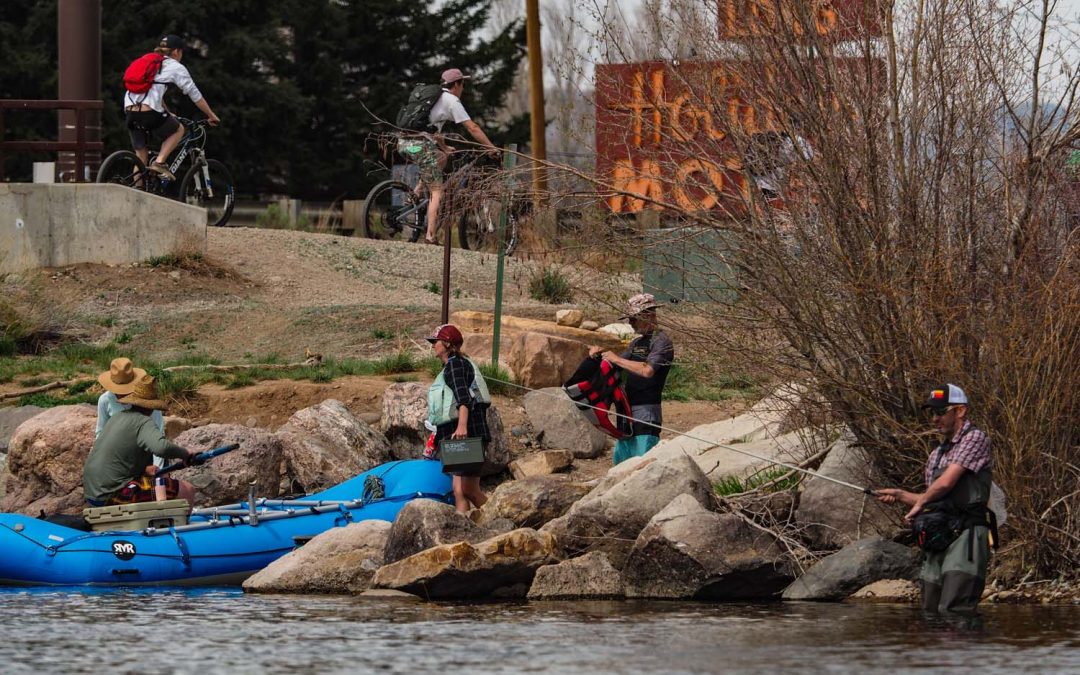 Rafters and fishermen congregate at a boat landing on the Gunnison River on May 15, 2021. Credit: Dean Krakel

Colorado’s rivers and streams are rising after a year of pandemic quarantine and social distancing, and the anticipation of rafters and kayakers is rising as well. But water resource experts and outfitters are cautioning that the second year in a row of below-average and unseasonably warm spring temperatures will contribute to a short float season.

“We’ve had another dry year. Last year wasn’t that great either,” said Aldis Strautins, hydrologist for the National Weather Service in Grand Junction. “The summer was dry. Fall was dry. Soil moisture is very dry. This doesn’t bode well for rafting and kayaking. Things can change but we’re not seeing any indication of that right now.”

As of last week, Strautins said the moisture content of snowpack remaining in the Upper Colorado River Basin is 79 percent of normal, while the Rio Grande and Yampa basins stand at 78 percent, the Gunnison basin is at 73 percent, and the San Miguel, Dolores and San Juan rivers are at 66 percent.

Kyle Johnson, co-owner of Rocky Mountain Adventures in Fort Collins, said the near-normal snowpack in the South Platte Basin will provide his company with enough snowmelt to keep customers on the Poudre River happy this summer.

“We currently have the best snowpack in the state,” Johnson said. “The Poudre has been at runnable levels for the past three weeks. Although we definitely don’t anticipate high water, we’re looking forward to a nice, even flow season.”

Andy Neinas, owner of Echo Canyon Outfitters in Cañon City, said the COVID-19 pandemic provided a tough learning experience for his operation and other outfitters.

“We’re using 2020 as a North Star. We learned things. We were washing paddles. Now we know that was an unnecessary precaution,” Neinas said.

But the company continues to be vigilant, especially in protecting its workers. “Here at Echo Canyon any team member that wants to be tested or vaccinated can do it on the clock. We’re giving our team members a $100 bonus for getting vaccinated.”

Bob Hamel, executive director of the Arkansas River Outfitters Association, said the his basin’s stored water supplies, though well below normal, are holding up and will help ensure rafters have enough liquid to float. “We’re not going to have any problems with water. It won’t be too high but it’ll be sufficient. We’ve seen a pretty good early start already.”

Coping with COVID-19 in 2020 was one of the greatest challenges in Colorado’s commercial rafting history, according to a new report by the Colorado River Outfitters Association. Commercial river use declined by more than 20 percent in 2020, with visitor spending dropping from nearly $185 million in 2019 to $148 million last year.

“We had a lot of anxiety in the rafting business,” Hamel said. “But once we got going, people were ready to get outside. We saw that everywhere on public lands. Rafting was no surprise. We survived last year and we’re appreciative that we’re still in business.”