The next time you take a hot shower in Denver, know that one day soon, once that water goes down the drain, its warmth will be captured and used to heat Denver’s new National Western Center.

The project is part of the $1 billion redevelopment of the National Western Center and will help the center reach its goal of becoming net zero, which means that it will be able to produce as much energy as it needs to operate once it opens in 2025.

But helping drive this heat recapture effort is a federal Clean Water Act regulation that requires wastewater utilities across the state and the country to reduce the temperature of any wastewater they discharge to a threatened stream. The idea is to protect fish and aquatic habitats that are in danger of overheating due to a combination of the warm discharges and shrinking streamflows related to climate change and drought.

The Colorado Department of Public Health and Environment (CDPHE) approved the regulation in 2007 and spent the next decade mapping affected stream segments, tracking stream temperatures under varying conditions, and measuring the temperature of effluent as it was being discharged at different times of the year. Now it is preparing to impose new temperature standards when each utility seeks to renew its federal wastewater discharge permit.

The new standard will affect cities across the state, from Longmont to Englewood, to Colorado Springs and Vail. Some 400 wastewater utilities operate in Colorado, and 89 of these are being required to monitor their discharge temperatures as part of the data they must submit to renew the permits, according to the CDPHE. Five have been notified that they must meet a new standard, and 22 are already complying with the new standard.

In Denver, the Metro Wastewater Reclamation District is among the first utilities notified that it will have to comply with the regulation. To do so it will relocate two major collection pipes that run across the site of the new National Western Center. Those pipes will be buried under the National Western buildings, and the heat they emit will be captured and used, along with solar energy, to heat the center itself.

“Our core mission is to meet permit requirements and regulatory requirements to be protective of the environment. This is a new requirement but it’s also a fantastic opportunity for us that results in good stewardship of resources and reduces our impact on the environment,” said Jim McQuarrie, director of strategic initiatives at Metro Wastewater. 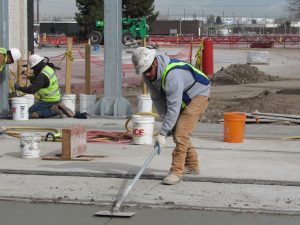 A worker smooths concrete at the Metro Wastewater Reclamation District April 11. The district is spending millions of dollars to reduce the temperature of the wastewater it discharges to the South Platte River. Credit: Jerd Smith

Like other utilities across the country, Metro Wastewater has been able for several years to capture some of the intense heat generated by its waste streams, and has already used a portion to reduce its own utility bills. McQuarrie said the existing recapture practice has saved Metro roughly $1 million a year on its $6.5 million electric bill.

Expanding the heat recapture to include the National Western Center will help the giant treatment plant reduce the temperature of the effluent it discharges daily to the South Platte River. Under the new standard Metro will have to reduce its effluent temperature by about 27 percent, from 15 degrees Celsius to 11 or 12 degrees Celsius, according to McQuarrie. The final number hasn’t been determined yet. Metro has until 2025 to finalize its plan and submit it to state regulators for approval.

Colorado Springs Utilities is still waiting to hear whether it will have to reduce its wastewater temperature before it is discharged to Fountain Creek. The utility will apply to renew its discharge permit at the end of this year.

“We will not know for sure what limits could be imposed until we see the draft permit that is issued, however, we wouldn’t be surprised to see some type of effluent temperature limits,” according to Colorado Springs Utilities spokesman Steve Berry.

“The regulation is designed to protect all aquatic life,” said Barbara Bennett, water quality scientist in the Water Quality Control Division of CDPHE. “A lot of people don’t think of heat as a pollutant because it is not toxic like ammonia or metal. However heat can have just as much of an impact on an aquatic life community,” she said.

For example, stream temperature plays an important role in a fish’s growth and metabolism and it can be a cue for spawning. “If they are spawning at the wrong time of the year, their reproduction may not be successful. For healthy fisheries it’s important for streams to maintain a normal seasonal pattern for temperature,” Bennett said.

For stream advocates, such as Mely Whiting, legal counsel to Trout Unlimited, requiring a temperature standard for dischargers is important, but not necessarily more important than other factors that can affect stream temperature, such as ongoing water diversions.

“From our perspective, those temperature standards are very important, particularly with regard to climate change, and they need to be applied,” Whiting said.

Not all wastewater treatment plants will be subject to the new requirements. If their effluent discharge amounts are small enough, and the stream to which they are discharging is large enough, then their effluent may be deemed harmless to the stream.

Still, even some small waste treatment plants will be affected. Vail, whose wastewater is treated by the Eagle River Water and Sanitation District, must adopt a new temperature standard, and Avon may have to as well.

Avon has already used heat recapture to warm the pool at its recreation center and to heat the town hall. Wastewater officials said if the community has to comply with the requirement, it would likely only be during the month of October, when streamflows are usually low because the runoff from the mountain snowpack is largely over.

“It’s super complex,” said Siri Roman, wastewater manager at the Eagle River district. “We have 39 temperature loggers and we have a ton of data we’re trying to understand. We’re okay right now but there is a risk that we may have to do something at some point. Obviously stream temperatures change with the air temperature and with the elevation. We have a 6,000-foot change in altitude along our system. It is challenging.”

Fresh Water News is an independent, non-partisan news initiative of Water Education Colorado, wateredco.org. WEco is funded by multiple donors. Our editorial policy and donor list can be viewed at wateredco.org.