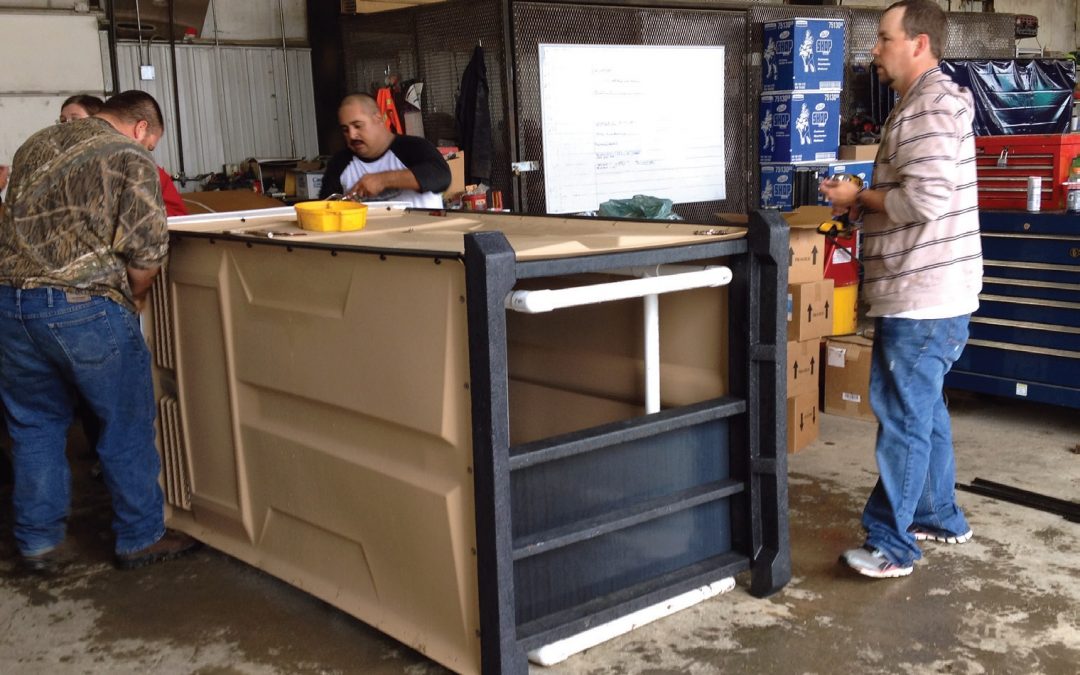 Volunteers from oil and gas companies built approximately half of the 212 portable toilets erected in Evans immediately following the September 2013 flood. Photo courtesy of: City of Evans

Evans’ drinking water system was largely unscathed by September 2013’s floods, but its wastewater system failed and for days after the rain cleared, temporary plastic toilet stalls lined roads. Residents were prohibited from using their toilets or any indoor plumbing.

“They had portable bathrooms on the street to prevent raw sewage from going to the [South Platte] river,” says Ron Falco, safe drinking water program manager for the Colorado Department of Public Health and Environment (CDPHE).

That was only the beginning of the trouble, though. Wastewater treatment systems located along raging streams failed as their control rooms filled with water and their electric systems shorted out. Hundreds of individual septic systems were also washed away. The end result: Millions of gallons of raw sewage surged across yards, city parks and farmland out onto the Eastern Plains. In all, 20 wastewater systems sustained damage, according to the CDPHE.

“All but a few were able to be operating the next day,” says David Kurz, CDPHE’s lead wastewa­ter engineer. And despite being inundated and in some cases cut off from roads, many wastewater plants were able to operate at least partially because their staffers stayed on site around the clock as the crisis unfolded. Still, the rank water became a major public health threat and the state issued multiple advisories urging people to stay away from the floodwaters. Despite state officials’ deep concerns about the threat to public health, no illnesses due to contamination were reported, accord­ing to Mark Salley, CDPHE spokesman.

As communities move forward with repairs, the numbers are daunting, but federal and state as­sistance is helping water providers and districts pay to improve and repair infrastructure. Evans alone expects its wastewater treatment plant to need about $7 million in repairs. Its annual budget for such work is closer to $1 million.

“A lot of folks don’t think about their sewage treatment plant,” says Falco. “But when it goes of­fline, it’s a problem.”

Even with the necessary funds, managers face the rebuilding challenge of mitigating future flood risk. Because wastewater treatment plants must discharge their treated effluent into waterways, they are usually located in floodplains.

Still, innovative safeguards could reduce the likelihood of future flood-inflicted outages or the extent of damages. The U.S. Environmental Protection Agency in early April 2014 published a report outlining disaster-resilient design considerations for the town of Jamestown’s drinking water system, for instance, as well as recommendations for improvements to wastewater treatment approaches there, such as pooling wastewater from low-lying individual septic systems to a publicly operated system sited above the floodplain.

“A lot of folks don’t think about their sewage treatment plant,” says Falco. “But when it goes of­fline, it’s a problem.”