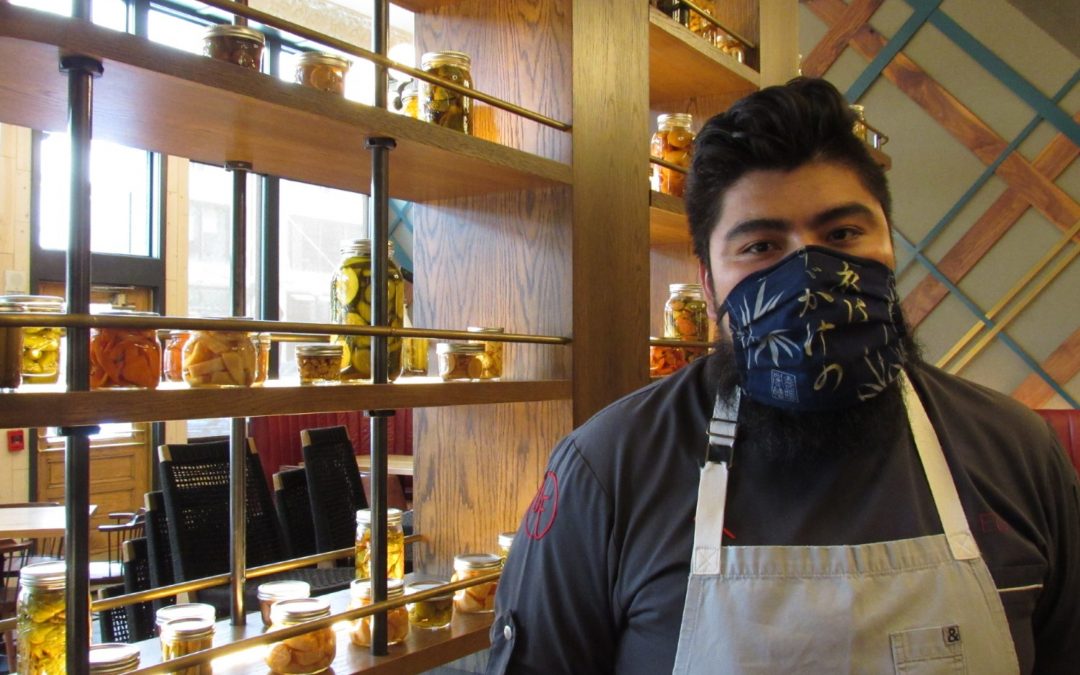 Inside Denver’s high-end boutique steakhouse, Urban Farmer, the lights are off, the booths are empty, and it is quiet, the silence a result of the COVID-19 shutdown.

But toward the back in the gleaming LoDo kitchen, a low-level whisper rises from a small device that is circulating water in a plastic pan on the stainless steel prep counter, washing a frozen beef tenderloin continuously and allowing it to quickly defrost, using less than one-tenth of the water that the eatery once used to do the same work.

The Boss Defrost, as the device is known, is the work of former Urban Farmer executive chef Chris Starkus and engineer Mac Marsh, who developed the earth-friendly technology to help restaurants cut their water use, reduce their operating costs, and shrink their carbon footprint.

Just two years old, the “boss” is a welcome grace note in a restaurant scene that has been bludgeoned with weeks of closures and this week a rash of rioting in Denver over George Floyd’s brutal death at the hands of Minneapolis police.

When Urban Farmer was forced to close March 13, there was a dash to take its signature organic, locally sourced, high-end meat and place it in freezers in an attempt to save some of what was being lost, according to current executive chef Erick Gamas.

Now, as the eatery prepares for a limited opening this week, the small device is running almost full-time, bringing choice cuts of meat back to life.

“It feels good to be able to do this,” Gamas said. “We talk a lot about taking care of Mother Earth in this restaurant. With this, we are not wasting water. “

Boss Defrost co-founder Marsh said he was inspired to create the thawing device after working as a hotel engineer and noticing, over and over again, how much fresh water was wasted every day.

Designing and manufacturing this ultra-green commercial kitchen tool was almost a no-brainer.

“A single restaurant uses 1,000 gallons of water a day. It’s an unaddressed waste stream. But a lot of people don’t know this unless you’re working behind the scenes,” he said.

A normal defrosting process, where water from a tap is run over frozen food, uses 150 gallons an hour to thaw a pound of meat, Marsh said. The Boss Defrost reduces that to between 5 to 10 gallons per hour.

The Boss Defrost team believes the unit’s $300 price tag will encourage thousands of restaurants to see the benefits of the modest device. “That’s a drop in the bucket compared to most other costs restaurants see,” said Marsh.

Since its launch in 2019, the company has sold hundreds of units across Colorado and in more than 14 states.

“Everybody in our back-of-the-house team loves it,” Brand said. “They are on board.”

Diana Starkus, chief marketing officer at the startup, said the full impact of the technology won’t be seen until it has found a place in every school cafeteria, hamburger joint, and pizza parlor.

“I would drop a Boss Defrost in every one of those places today,” she said.

Back at Urban Farmer the staff is gearing up for re-opening, training on the use of masks, temperature checks and gloves, and hoping that Denver’s love affair with restaurants will re-emerge strong this week.

“These past couple of days we have been judging the market to see what people want, and I am really excited,” Gamas said.

But plenty of uncertainty lies ahead, so much so that it’s almost the norm. But that’s okay, Gamas said. “We’ll be figuring it out as we go.”