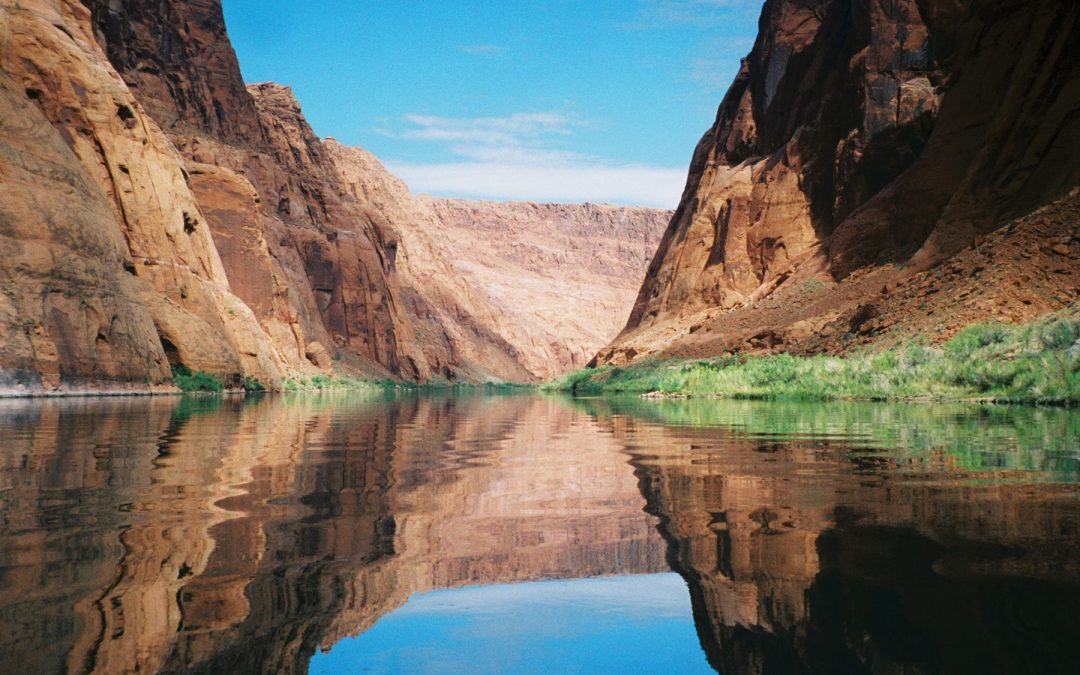 Although the topic of water can inspire heated discussion, it’s hard to argue about the myriad of ways that water provides us with recreational activities. From cradle to grave, people turn to water to have fun.

One of the most life-changing, recreational, and I would say educational experiences you can have is a rafting trip down the Colorado through the Grand Canyon. Most certainly it is about the rapids and rafting, but it is also about the friendships you make and the geological wonder of the layers of rock that date back 1.5B years as well as the flora and fauna that you observe along the way.

One of the most intriguing accounts of a Grand Canyon adventure is John Wesley Powell’s book, The Exploration of the Colorado River and Its Canyons, which discusses his two trips down the Colorado in wooden boats. CFWE’s own Nicole Seltzer experienced a rafting trip down the Colorado just last fall and wrote a thoughtful essay about her experience going down the river. There are hundreds of books written about this astonishingly beautiful spot in our country for both adults and children.

One of the premier young adult writers is Will Hobbs, a prolific writer out of Durango. Will’s two books about rafting the Colorado include Downriver and River Thunder. School librarians often send reluctant readers to Will’s books because they speak so perfectly to kids that age. Will has both talent and experience with kids, both of which allow him to speak to kids in their own voice, develop plots that are catchy and create characters that accurately reflect the issues and joys that kids of that age experience.

Water 2012 Book Club committee members chose River Thunder as one of the Book Club books. Will and his brother, Greg Hobbs (Justice Hobbs from the Colorado Supreme Court),  had planned to tour NE Colorado in April to speak with students at four middle schools and two public libraries about River Thunder. In the end, Will’s health did not allow him to make the tour, but brother Greg knew the show had to go on and presented for his brother.

During Greg’s visits to the schools on April 3 and 4, students were engaged with Greg on many levels; river rafting in high water; native Anasazi culture and its relationship to SW Colorado; understanding that we are all immigrants; the geology of the Grand Canyon; the Glen Canyon Dam and its near collapse; cutthroat trout and fishing; and the way of the judicial system. In addition, Greg showed Will’s slideshow highlighting photos of his trip down the Colorado.

Will’s novel, River Thunder, deals with a rafting trip down the Colorado. A group of teenagers are hoodwinked into meeting up at Lee’s Ferry at one of the most dangerous times to raft the Colorado due to a perfect storm of spring melt off, rains and bad water management. The protagonists in his book – Jessie and Troy – are teenagers who have a love/hate relationship that mimics the chaos of that age perfectly. In this sequel to Downriver, Jessie and Troy are trying to work out problems that happened in a previous trip down the Colorado. Will weaves in unexpected heroic acts while familiarizing the reader with the geography and geology of the great Colorado River. If you have a teenager in your family, it’s a great book to give or share with them. We will visit more of the Hobbs’ brothers books in another post later this month.

Share your most memorable accounts of your rafting trip down the Colorado.