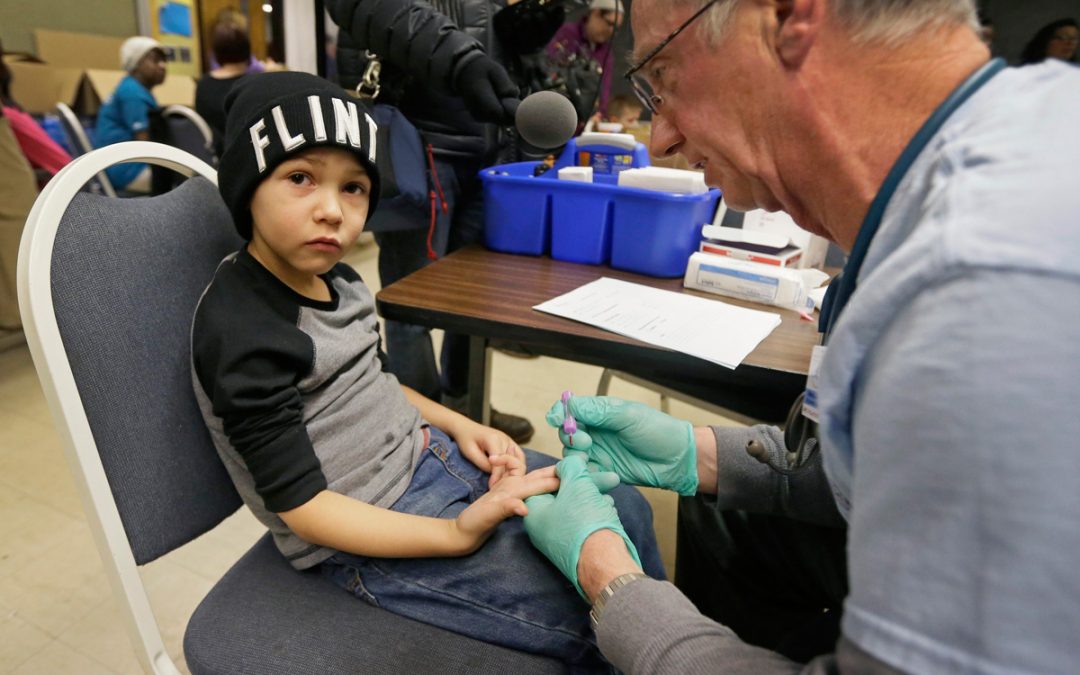 Registered nurse Brian Jones draws a blood sample from Grayling Stefek, 5, at Eisenhower Elementary School, Tuesday, Jan. 2016, in Flint, Mich. The students were being tested for lead after the metal was found in the city's drinking water.

Water providers step up to protect against the leaching lead that could reside in residential plumbing, but do the rules need to be strengthened as well?

More than a year after the 2015 disaster in Flint, Michigan, abruptly brought lead and water quality threats to top of mind for many Americans, the health effects and the national dialogue about lead exposure continue to rage, turning up new worries and distrust—are we at risk? Is there lead in our water? How can we protect ourselves?

In Flint, an estimated 8,000 children and more adults were exposed to high lead levels and other toxins when the city switched its drinking water source from Detroit’s Lake Huron supply to the corrosive Flint River in an effort to save money. Without treating the river water with corrosion inhibitors, lead from city-owned pipes, service lines and household plumbing leached into drinking water. Children developed rashes and illnesses, some were diagnosed with lead poisoning, and the water was deemed dangerous. Flint has since switched back to using Detroit’s water, but plumbing and service lines must be replaced before it’s safe to consume the tap water—and any long-term health damage already done is considered irreversible.

It’s scary and as personal as it gets. People across the country have heightened water quality concerns—not without reason—while water providers and governments are taking a hard look at the rules meant to protect us.

“Lead is changing the discussion,” says Melissa Elliott, Denver Water’s director of public affairs. “Flint has changed our customers’ engagement on this [lead] issue. They’re a lot more aware than we could have made them on their own, so we’re taking this as an opportunity to have conversations.”

Lead in drinking water has been a longstanding issue, but it took Flint’s alarm to jolt populations to attention. Lead pipes, service lines, lead solder and alloys are common in older construction. In 1986, an amendment to the Safe Drinking Water Act prohibited the use of pipes, solder and flux that were not “lead free.” The definition of lead free tightened with the 2011 Reduction of Lead in Drinking Water Act, which lowered the maximum lead count of plumbing parts that come in contact with water—like pipes, fittings and fixtures—down to a weighted average of 0.25 percent.

The water itself, as well as infrastructure and community needs, varies from place to place, but utilities for the most part have been working to remedy leaching through corrosion-control treatment, replacement of old water mains, education, and testing.

In 1991, the U.S. Environmental Protection Agency (EPA) published its Lead and Copper Rule, regulating lead differently than other contaminants. Because lead does not come from the water, but instead leaks out of household plumbing and service lines, water utilities work with a pool of homeowners who have lead service lines or lead solder plumbing at home to take samples at their household faucets. If lead concentrations in tested water exceed 15 parts per billion in more than 10 percent of the taps sampled, the water provider must respond through prescribed steps, like completing more testing, working to refine their corrosion-control treatment, and publicly alerting customers.

In Colorado, 32 water systems managed by HOAs, towns, cities, and major water utilities have exceeded allowable lead levels in drinking water over the past four years, according to data from EPA’s Safe Drinking Water Information System database. Denver Water is one of them, despite the fact that the finished water exiting Denver’s drinking water treatment plants is lead free. Denver Water’s mains and utility-owned infrastructure? Also lead free. The lead exposure some customers face is brought on by their own home plumbing and privately owned service lines.

“It’s difficult for utilities to comply because they don’t own all of the infrastructure—they don’t have control of everything to address [contamination], and our tools to enforce it are limited,” says Jennifer Robinett, compliance and assurance section manager for the Colorado Department of Health and Environment’s Water Quality Control Division. The only ways to remedy lead contamination are through corrosion-control treatment or by changing out the plumbing and service lines to remove all sources of lead.

Corrosion control can be complicated. Sometimes a slight change in water chemistry will push another contaminant out of compliance, which means further refining the utility’s corrosion-control approach. It can be expensive and complex, Robinett says. But replacing service lines and plumbing is often more of an invasive challenge.

The cost of playing it safe and replacing lines can be prohibitive, averaging around $6,000-$7,000 per connection. “For many homeowners that’s not in their household budget,” says Elliott. At the same time, Denver Water can only reach about 1,000 lines each year and can’t cover the cost of replacing 60,000 service lines, and there aren’t grants available to give customers the financial boost they need for replacement, she adds. “As a community we have to figure this out.”

Concerned customers can, since June 2016, receive a free sampling kit from Denver Water. For those who uncover lead but can’t fork over the cash for a new service line, the less expensive option is to install a water filter.

But a real solution may be on its way. EPA is updating its Lead and Copper Rule, with a draft of the revisions expected in 2017. A set of 2015 recommendations from an advisory committee might indicate what’s to come. “We believe the rule will move more toward lead service line replacement and public education,” Elliott says, and requiring service line replacement will require a budget to make it feasible.

Meanwhile Robinett hopes for easier sampling and implementation of the rule—and resources to help communities remove lead. “Awareness is bigger with Flint, but I think that perspective is really the only difference,” she says. “If we want to remove the lead, we need money to remove the lead.”