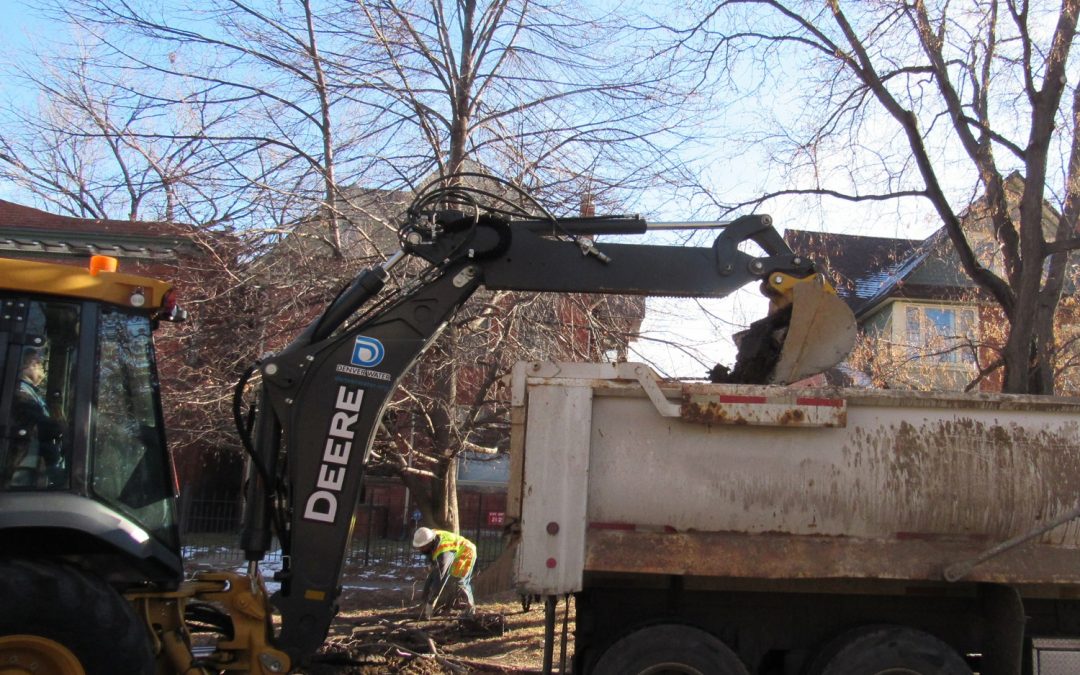 Hundreds of Denver property owners have failed to respond to requests or have directly refused to allow Denver Water to replace lead service lines leading to homes and businesses, a situation that jeopardizes the city’s efforts to keep lead out of drinking water.

The pipe replacement program, one of the largest in the country, is being done to help the agency comply with the federal Safe Drinking Water Act, which sharply limits lead in drinking water.

Since the program’s approval by the U.S. Environmental Protection Agency and the Colorado Department of Public Health and Environment in 2020, Denver Water has replaced some 10,000 service lines out of 68,000 targeted in the program.

But the agency has yet to decide how to bring reluctant property owners into the fold, according to Alexis Woodrow, Denver Water’s lead reduction program manager.

“Of course we would like to get 100% consent or compliance and we’re continuing to come up with communications to make sure homeowners understand the why behind this work,” Woodrow said.

According to data obtained by Fresh Water News through an Open Records Act request, 534 property owners, roughly 5% of those targeted by the program to date, have either failed to respond to the agency’s request to replace the service lines or have specifically refused to allow the work to be done.

Top reasons for refusing, according to Woodrow, are that homeowners don’t want their landscapes disturbed or they believe their lead service lines have already been replaced.

Denver, which is Colorado’s largest municipal water utility, has known lead was present at the tap in some of its customers’ homes since it appeared in routine sampling in 2013. The levels exceeded the benchmarks set under the Safe Drinking Water Act.

For several years, the utility ran pilot tests and negotiated with CDPHE and EPA over how best to eradicate the harmful metal. Though the amounts of lead found in Denver’s tap water samples varied, no amount of lead is considered safe to ingest, especially for young children.

Though lead isn’t present in the city’s treated water, it shows up at customers’ taps if it is delivered through aging lead service lines, where corrosion allows it to seep into the supply.

Cities across the country, including Pittsburgh, Penn., Newark, N.J., and Washington, D.C., have been dogged by an increase in lead contamination as service lines age and corrode, allowing the lead to comingle with water supplies, eventually reaching taps.

The CDPHE issued an order in 2018 requiring Denver to begin adding phosphorous to its water, one of the most effective ways to reduce corrosion in pipes. But phosphorous is also a pollutant and causes problematic algae blooms in lakes and rivers. Adding it to the municipal drinking water supply would also make it harder for wastewater treatment operators to meet their own obligations to keep phosphorous out of rivers and streams.

Due to those concerns, Aurora, Metro Water Recovery, The Greenway Foundation, and eventually Denver, sued the CDPHE in 2018 to stop the order from taking effect.

The dispute was settled after Denver was able to obtain a rare variance under the Safe Drinking Water Act in exchange for agreeing to invest some $68 million over 15 years to replace lead service lines, offer free water filters to residents as they wait for the new lines to be installed, conduct community education programs, and increase the pH of the water supply to also help reduce corrosion in pipes.

In earlier negotiations the utility had proposed replacing the lines at a much slower rate that would have taken decades to complete.

MaryAnn Nason, CDPHE spokesperson, said the agency is happy that Denver Water has been able to replace so many lines so quickly.

“While we are pleased, our goal is to have everyone participate or use a filter to keep themselves safe,” Nason said via email.

“When Denver Water’s program was approved, a strong outreach component was included. We wanted Denver Water to reach out to the community and provide educational materials about why this is important to do and how it protects public health. We understand the disruption to their lives is significant, but the outreach program is intended to help customers understand the safety and health benefits of replacing their service line,” she said.

Citing state privacy laws, Denver Water declined to identify addresses of properties that had not complied with the replacement requests. But an analysis of the zip codes where the agency has been shut out shows that the largest number, 124, are in 80205, which encompasses an area north and west of City Park and which includes Five Points and the Whittier neighborhoods.

The zip code with the second largest number of non-compliant property owners, 72, is 80220, an area that includes South Park Hill, Montclair and Hilltop.

Though no large apartment complexes have refused to replace lead lines, according to Denver Water, dozens of small multi-family units have yet to agree to have the work done, according to Fresh Water News’ analysis.

Tom Romero, an associate professor of law at the University of Denver and an expert on water equity issues, said the replacement program is critical to providing safe drinking water to everyone in the city.

“I definitely am concerned for all of those residents where you have recalcitrant property owners that are refusing to have these lead pipes replaced,” Romero said.

“This is definitely a public health issue,” he said. “It’s pretty remarkable that they have been able to get a 95% response, but any lead level is putting people at risk. It goes to the duty of Denver Water to provide safe drinking water to us all.”

This year is the third year of program, and is a critical benchmark with the EPA, which will decide later this year whether to allow Denver to continue the work, or use a different strategy.

Denver Water’s Woodrow said the agency is still trying to decide how aggressive to be with reluctant property owners because legally it could access the properties without the owner’s consent.

“We have discussed internally if we could compel the customer,” she said. “But we haven’t gotten there yet in terms of making a decision.”

But that may change.

“When you’re looking at the long-term strategy, we’re going to have to come up with additional tactics to get these lines replaced,” she said.