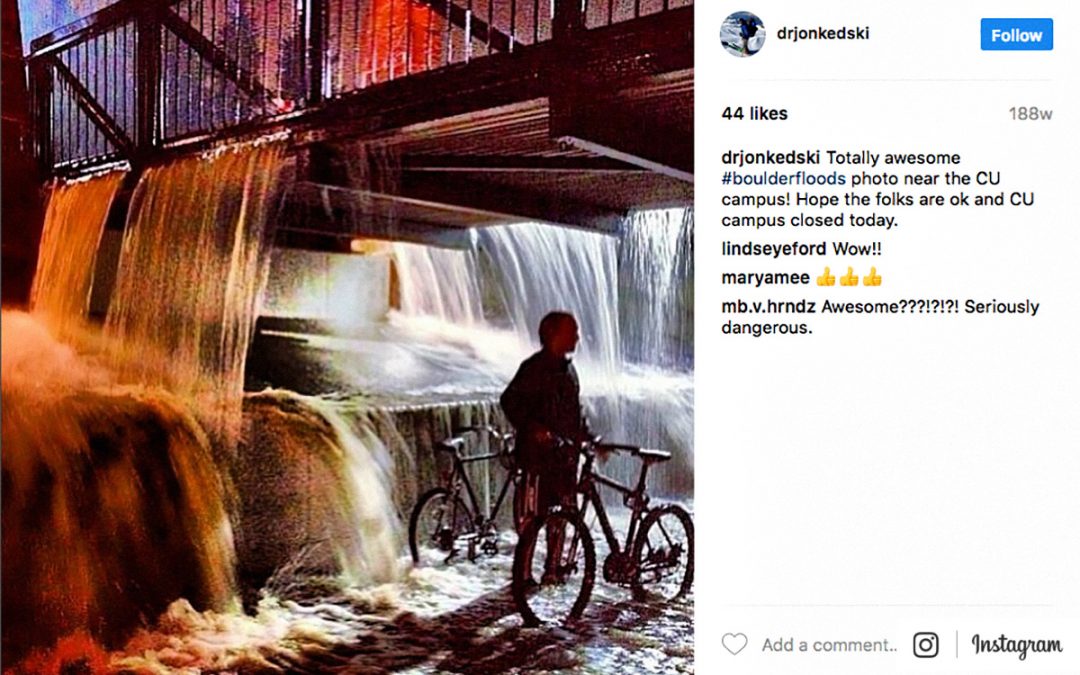 Photos shared on social media during the 2013 flood on Colorado's Front Range have helped researchers and engineers better understand hydrology and rebuild for resilience. Photo by @Drjonkedski/Instagram

Disaster recovery and planning for a safer world, courtesy of social media data

It started with a drop and after several days in September 2013, Boulder County was flooded with 17 inches of rain—the amount the city would expect to receive over the course of a year. Thousands of people and animals evacuated, roads were rendered impassable and homes were destroyed. Boulder came to a standstill.

During and after natural disasters, research teams and first responders across the country stand by to cull data and push information out over social media with the aim of improving public safety. Social media data can be used both locally and nationally to communicate with the public, determine which areas are in need of immediate assistance, supplement remote sensing data, and improve reconstruction efforts by engineers.

“We’re not waiting until people are dialing 911 to get information. We can start getting information from disaster sites from the public telling us,” says FEMA Administrator Craig Fugate, speaking to the impact of social media on emergency management in a December 2015 FEMA video.

Still, emergency responders remain wary as social media can spread misinformation—particularly when people are fearful. During the 2013 floods, reports of dam failure were quickly disseminated when people noticed water pouring from a dam’s spillways. The spillways were working properly, but panicked reports forced emergency personnel to investigate, taking time and resources away from actual emergency situations.

Social media data collected during the 2013 floods has been studied by researchers from both Penn State and the University of Colorado Boulder. At Penn State, researchers discovered that social media can supplement remote sensing data during extreme weather events. Historically, responders relied on remote sensing to identify flooded areas and determine where to launch rescue efforts, but satellite data is not always available in real time and may not accurately reflect what is happening on the ground. An algorithm examined 150,000 tweets from people in affected areas of Boulder, along with 22,000 photos from satellites, Twitter, Flickr and other sources. The analysis revealed that satellite imagery portrayed only minimal flooding, while social media posts documented impassable roads. Used together, satellite data and social media can complete the picture.

Project EPIC (Empowering the Public with Information in Crisis), based in CU Boulder’s College of Engineering and Applied Science, has also examined social media data from the Boulder floods—in their case, to improve reconstruction efforts. Project EPIC studies social media during disasters to inform engineering and rebuilding, creating a safer built environment that can stand up to future events.

Weather events damage structures and geography. When initial construction begins on a structure, engineers make mathematical estimates to determine the amount and types of stresses it should be able to withstand without incurring damage. After cataclysmic events, engineers gather on-site information that allows them to establish how well their calculations held up. This data provides the opportunity to improve future structural designs so that both lives and money are saved.

When a post-disaster reconnaissance mission is finally conducted, often cleanup work has already begun and evidence of how structures and landscapes handled the disaster no longer exists or has been altered in a way that is no longer useful. Unfortunately, areas with significant damage are often unstable, dangerous and inaccessible during and immediately after a storm. However, there are still people who can document the damage. The residents who live in these weather-ravaged areas can take photos in the midst of extreme weather events—gathering information and sharing it via social media. Project EPIC, along with Dr. Shideh Dashti, assistant professor of civil, environmental and architectural engineering at CU Boulder, found that those social media posts can support post-disaster reconnaissance work, improve long-term structural integrity and safety, and offer new hints about hydrology and drainage.

“Project EPIC recorded tweets during the floods,” Dashti says. “[Our researchers] provided the EPIC team with keywords that are relevant to disaster reconnaissance and infrastructure performance, which allowed us to filter the tweets to a manageable number for further analysis.”

The study, co-authored by Dashti, collected Twitter data from September 11-20, 2013, and found that about 1 percent of the 212,672 unique tweets collected were valuable for post-disaster reconnaissance. What made certain tweets useful? They were encoded with latitude and longitude data, or geo-tagged and additionally supported with pictures, videos, or statements used to verify the location of the tweet.

These 2,658 tweets were further filtered down to 40 tweets determined to be the most relevant to reconnaissance activities because they revealed damage to “lifelines”—roads, bridges, water or sewage lines, among others. Pictures included with these tweets provided useful information to engineers, allowing them to identify the type and extent of damage found in an area so that reconstruction work could be planned. The study’s conclusion: Social media data can provide crucial information to successfully support engineering reconnaissance missions after extreme weather events.