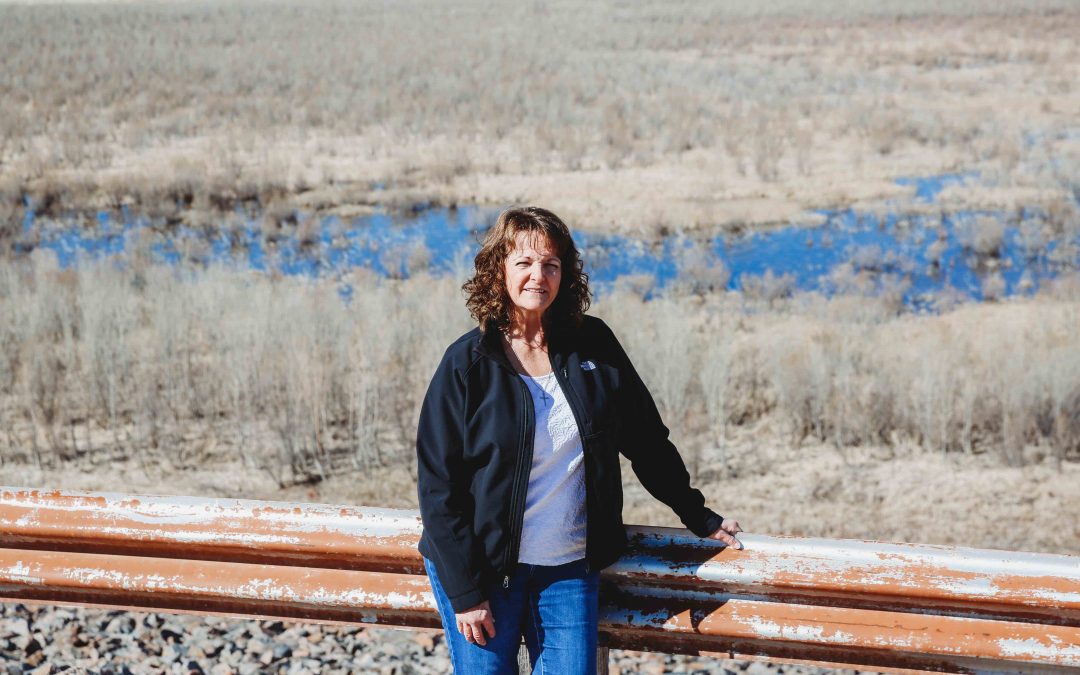 Deb Daniel, manager of the Republican River Water Conservation District, stands in front of the former Bonny Reservoir, which was drained in 2012. Now Daniel is working to restore the riparian area behind the dam. By Whitney Hansen Photography

In 2012, Bonny Reservoir, which sits some 12 miles west of the Kansas border on the South Fork of the Republican River, went dry. After 60 years of holding water, Bonny was drained and numerous wells were voluntarily retired to help Colorado send water east to comply with the Republican River Compact. In a region reliant almost entirely on groundwater, aquifer depletions had depressed surface water flows, and wells were shut off to get enough water across the state line. In draining Bonny, the Republican River Compact Administration released Colorado from insurmountable seepage and evaporation water charges, freeing up more water for compact compliance with downstream states.

“The year it was being drained it just made my heart sick,” says Deb Daniel, general manager of the Republican River Water Conservation District, which works to achieve compact compliance, primarily by purchasing and leasing surface water rights and paying for the retirement of agricultural acreage.

For Daniel, attachment to Bonny Reservoir is personal and generational. She had four family members drown in the devastating 1935 flood that killed more than 100 people and sparked the construction of the dam. She grew up on the reservoir and learned to water ski on it, as did almost everyone else who lived nearby, she says. In Bonny’s prime, people would stop in surrounding towns for fishing licenses, food and lodging en route to the reservoir. It was the only large water body around. “It had an impact on several different communities in Colorado,” Daniel says. It drew migratory birds too. “All of that is gone, they found a different route to take,” she says.

The dam remains for flood control, but where water once stood and where a natural channel could run, invasive plants like Russian olives have taken hold, with deep root systems that drink up any whisper of flowing surface water.

While nostalgic for Bonny as a recreational and economic asset, Daniel continues to focus efforts on its site. She’s stewarding a stream management plan, along with other partners, with the aim of restoring recreation and a healthy channel for the South Fork of the Republican River to flow.