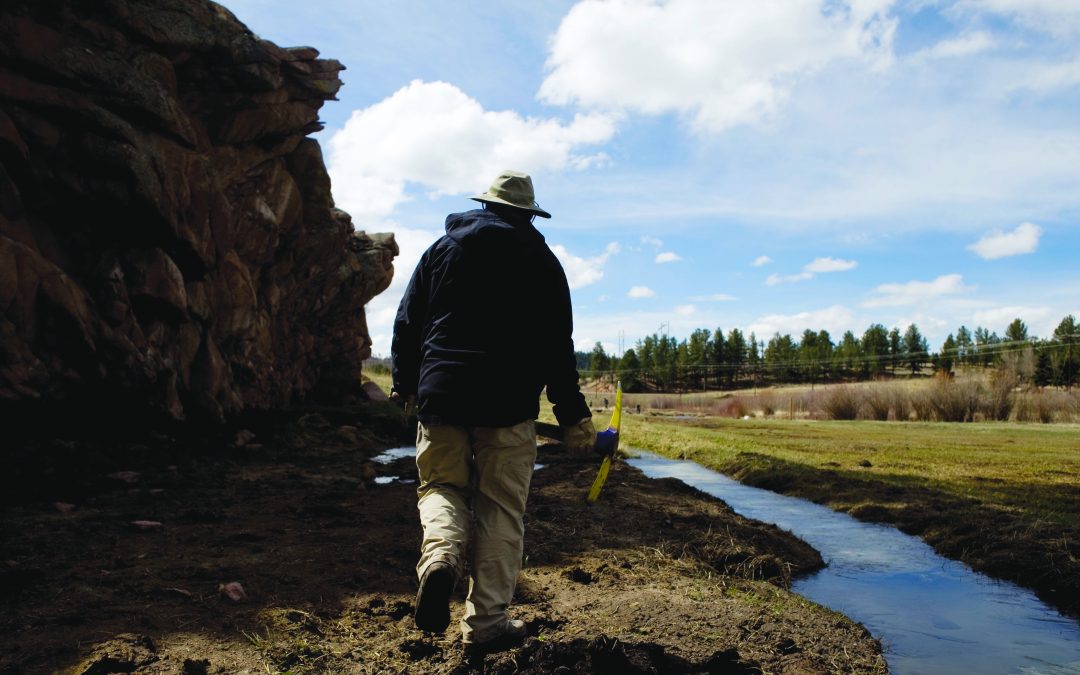 Armed for the job, John Giordanengo, projects director with Wildlands Restoration Volunteers, searches for soft soil to backfill around willow cuttings planted along Tarryall Creek by a volunteer crew. The native willows will protect eroding streambanks and enhance the riparian area on the privately-owned Puma Hills River Ranch, where the original willow communities were cleared for hay and cattle operations. Inset: The Red Lady Bowl of Mount Emmons lights up at dawn beyond the Snake River, which is joined by Coal Creek near the town of Crested Butte.

Mount Emmons is probably the closest thing to a holy mountain that the people of Crested Butte, Colo., would acknowledge. It rises 3,000 vertical feet in long, gentle slopes from the western edge of town to an abrupt, glaciated bowl called The Red Lady, named for the early sun that lights her face while the town still lies in night’s shadow.
Draining the west and south slopes of Mount Emmons is Coal Creek, a modest headwaters tributary of the Gunnison River that flows through downtown Crested Butte and provides the town’s water supply. Its name reflects its path, which cuts a narrow valley through a layer of coal. The mountain sitting atop that layer of coal contains rich, if geologically jumbled, lodes of silver and all the heavy metals—lead and zinc among them—that are typically found near silver. 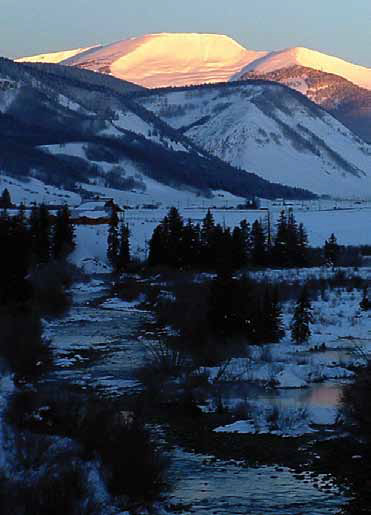 Historically, Mount Emmons was a central element in the town’s economic as well as its spiritual life. Coal mines there and in adjacent mountains were Crested Butte’s economic mainstay for its first 75 years, until the mid-1950s. Hardrock metal mines also operated on and off, corresponding to fluctuating markets.
In 2003, the High Country Citizens Alliance, an organization initially formed in 1977 to oppose molybdenum mining on Mount Emmons, initiated a water quality study of Coal Creek. The study found parts of the stream were contaminated enough with heavy metals, some naturally occurring but most from mine drainage, to warrant designating them as “impaired stream segments,” giving them priority for federal and state mitigation funding. The long-abandoned Standard Mine on Mount Emmons was designated as a Superfund site, being placed on the Environmental Protection Agency’s priority list.

Leading the push to get Coal Creek and Mount Emmons cleaned up was Steve Glazer, director of High Country Citizens Alliance’s water program. Expecting the federal government would take charge of the Superfund site, he strategized to create a locally-based effort to clean up the impaired stream segments. Rather than “letting the government do it,” he organized the community to take on the task themselves, matching local efforts with federal money that was available for local groups at work on the problems in their watersheds.

Politically, Glazer knew the alliance could not be the group to do this work. Its history of vigorous advocacy for the physical environment in the upper Gunnison valley had put it in opposition to certain projects put forward by major players in the local recreation economy and also created tension with some of the public agencies whose cooperation would be required.

So Glazer spearheaded the creation of a new organization, the Coal Creek Watershed Coalition, one of a relatively new kind of group focused on remediating a specific set of environmental problems. These new groups are generally called watershed groups, and their focus is the health and vitality of the river that runs through their lives. The first of these watershed groups formed in Colorado in the mid-1990s, and today there are at least 80 of them in Colorado communities, further organized into a statewide Colorado Watershed Assembly. Nationally, there are more than 3,000 such groups.

Jeff Crane, co-founder and executive director of the Colorado Watershed Assembly, who has been a dynamic force in Colorado’s watershed movement from the start, says that a watershed group is “a local citizen group organized to improve the water and watershed resources” in its community.
Other leaders within the movement emphasize the collaborative nature of the groups, which draw from local businesses, property owners, public officials, state and federal agencies, and “just citizens,” as well as those proud to call themselves environmentalists. The boards of watershed groups are comprised of individuals with diverse mindsets but who all have a stake in the future of the stream. These members’ lowest common denominator was well articulated by a member of the Coal Creek Watershed Coalition’s board: “I drink the water.”

Many of the new watershed groups in Colorado have, like Coal Creek, organized to mitigate some specific, locally-occurring problem or natural event. Often, those are problems associated with the state’s mining heritage: Residual metals from thousands of large and small abandoned mines—plus their tailings and waste rock piles—are draining into headwaters streams. Others address issues associated with agricultural communities—stream banks degraded when cleared of riparian vegetation and trampled by livestock, non-point source runoff containing fertilizers and insecticides and other pollutants, and ill-planned sand and gravel “harvesting” operations. Groups are also at work in the most urban environments: Several in the Denver area are working to “free” small South Platte tributaries long consigned to culverts and establish greenways along them.
Some watershed groups that formed in response to a specific issue have discovered and taken on additional or unexpected challenges in their watersheds. The Eagle River Watershed Council, the outgrowth of a group formed to monitor cleanup of the Eagle Mine Superfund Site, has since addressed traction sand migration from Interstate 70 over Vail Pass into the adjacent Black Gore Creek. The Clear Creek Watershed Foundation formed to deal with abandoned mines but has more recently become interested in developing alternative energy resources on the reclaimed sites. Other proactive work, such as addressing fuel-loading to reduce the threat of wildfire in the watershed, or funding research on historic streamflows to better inform water providers seeking to manage reservoir releases for ecological benefits, have sprung forth from groups originally formed in a reactive mode.

The explosive growth of watershed groups in the state over the past decade is largely a result of a change in how the federal Environmental Protection Agency does business. In 1987, the U.S. Congress amended the Clean Water Act to reflect the EPA’s recognition that non-point source pollution problems could not be addressed in the same regulatory manner used for point-source polluters, where pollutants are discharged from pipes or other identifiable sources. Non-point source pollution problems were so deeply ingrained in local economies and cultures, with so many incremental sources, that they could only be addressed if, as Crane put it, the EPA could “engage the public in this great work and do so at a scale never attempted before.”

Section 319 of the amended Clean Water Act provided EPA money, channeled through state agencies, for specific non-point source projects like the one on Mount Emmons—grants for planning, technical and financial assistance, education and training, demonstration projects and monitoring to assess success. Existing organizations with non-point source problems, like municipalities struggling with storm water runoff, were the obvious early recipients of 319 money.
By the 1990s, the states began to create programs for working with newly formed “collaborative watershed organizations.” Colorado’s Water Quality Control Division, which administers the 319 money here, reorganized in 1997 to focus its programs on a more holistic, watershed level, sending representatives to four quadrants of the state to both build on and stimulate the growing interest in homegrown action on local watershed problems. This unleashed a flood of grassroots activity. By the turn of the century, Colorado alone had 40 watershed groups, reflecting a nationwide movement. Between 1998 and 1999, EPA 319 grants almost doubled nationally, from $105 million to $200 million.

Further advancing the movement, in 1999 Jeff Crane from the West Slope and Richard Fox from the Front Range—more recently director of Trees, Water and People—along with some other watershed leaders, created the Colorado Watershed Assembly, partly to enable the exchange of information among the groups and partly to speak with a more unified voice at the state level. The Colorado Watershed Assembly has since evolved to assist watershed groups with grant writing, watershed planning—essentially drawing stakeholders together to identify and prioritize projects—and project management. It also works on expanding available funding sources, such as pushing the Legislature to make more money available through state agencies like the Colorado Water Conservation Board and Colorado Division of Reclamation, Mining and Safety.

The 319 funds are not “easy money.” They can only fund 60 percent of a project. The other 40 percent must be matched, either with cash or in-kind volunteer hours. The EPA also asks for comprehensive watershed plans from the groups it funds—a thorough historical, geological and hydrological description of the watershed, a full technical analysis of the problems to be addressed, and work plans for addressing them. The 319 funds can be used for planning grants or to hire professional consultants for the technical aspects of the watershed plans.

But it cannot be all professionals all the time. The EPA wants local community participation. Anthony Poponi, the Coal Creek Watershed Coalition’s director and only paid staff person, acknowledges the temptation to go light on working volunteers into the plans: “It’s a lot easier to hand a professional company a check for doing the work than it is to organize putting volunteers in the field with them.”

But Poponi also recognizes the purpose and importance of that volunteer involvement. “The gain is not just community building; it’s building a more intelligent community. People who work on the projects have more concrete awareness of the ecosystem and its needs and some skills that help maintain the work done into the future,” he says.
Now, the EPA is upping the ante even more, requiring that plans include measurable results for projects they fund. The Colorado Watershed Assembly is working with the Colorado Water Conservation Board and the Colorado Department of Public Health and Environment to develop a “Measurable Results Program” for Colorado’s watershed groups. Before-and-after chemical and biological data on physical habitat, inventories of life forms, and other specific information will be collected to literally measure the differences the projects are making.

Often, the watershed groups also “share” their watersheds with environmental advocacy groups, as is the case in Crested Butte. And comparisons of membership lists for those two groups in any Colorado valley usually show a lot of the same names on both. But the watershed groups are typically careful to avoid political territory that might limit their access to non-environmentalist elements of their communities. 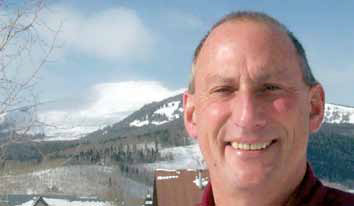 “The Coal Creek Watershed Coalition’s goals are to only deal with the science and to work with the broadest possible group of stakeholders.” -Steve Glazer, High Country Citizen’s Alliance

Glazer observes that he sometimes finds himself in the position of working in close cooperation with government agencies through the watershed coalition that the High Country Citizens Alliance is engaging more critically in regulatory issues. “I always have to let people know which hat I am wearing,” he says, although it’s clear that multiple hats increase the options.

Ultimately, the watershed movement fills an essential gap, uniting people who “just want to fix the river,” as someone in the North Fork of the Gunnison put it. These are citizens who have come to understand the problems facing their communities, who have ideas about what needs to be done, and who seek help from the federal and state level in order to get it done as a declaration of allegiance, not to an ideology but just to the place they live.

As much as they can facilitate ongoing relationships among diverse stakeholders and between various agencies and local governments, they will continue to improve the watersheds of the rivers we all depend on.