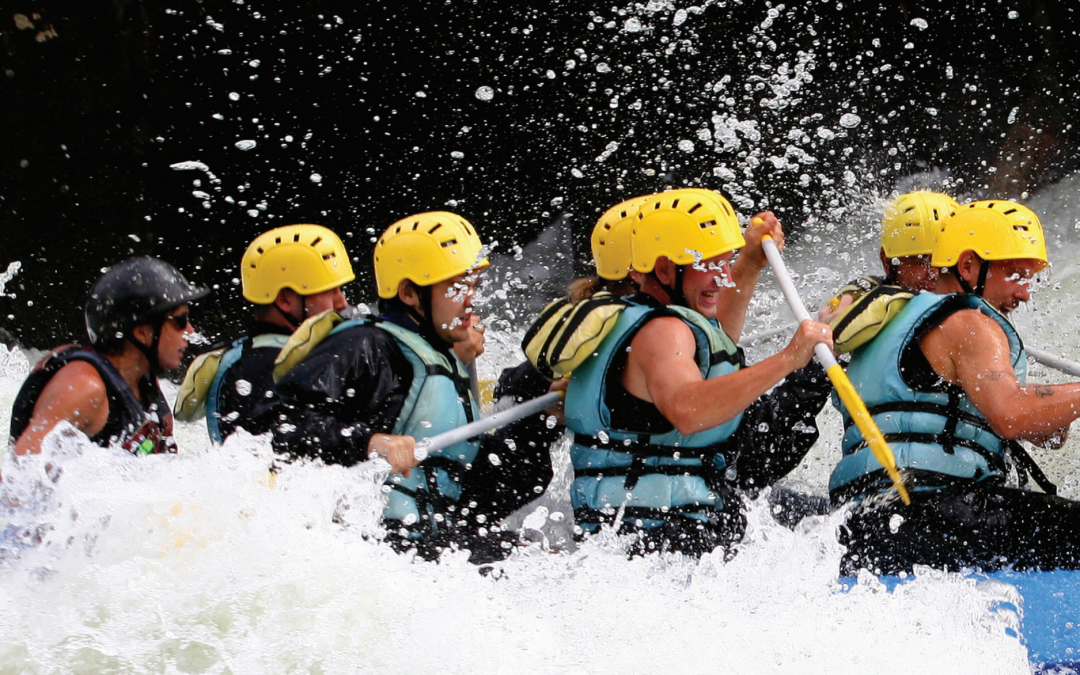 Beauty sets the stage for an economy based on outdoor play, water fuels the fun

Beneath skyscraping walls of sandstone and limestone, the Colorado River bubbles and bursts through Glenwood Canyon as it leaves the Rockies and heads toward the desert. The 12.5-mile stretch is punctuated by Shoshone Rapids, a whitewater obstacle course of standing waves and drops with names like “Maneater,” “Pinball” and “The Wall.” Through much of the summer and early fall, Shoshone’s intermediate Class III rapids are packed with commercial float trips and individual paddlers, making the run second only to the booming Arkansas River in terms of boating popularity in Colorado. According to the Colorado River Outfitters Association, commercial trips in Glenwood Canyon equaled nearly 62,000 user days and brought in $18.2 million in 2010.

“The low water season is actually our busiest season, and we definitely need the water we have. We couldn’t do with less.” – Susi Larson

Shoshone’s popularity is buoyed by the easy access along Interstate 70. The highway sinuously curves through Glenwood Canyon, although its design—and the crushing sound of the rapids—hides the elevated roadways from many vantages along the river. Another reason so many are drawn to this stretch of river is that flows are dependable.

“We’re really lucky in our area that we always have at least a steady flow,” says Susi Larson of Whitewater Rafting, a Glenwood Springs company first started by Larson’s father in 1974. “The low water season is actually our busiest season, and we definitely need the water we have. We couldn’t do with less.”

Regardless of drought or seasonal river fluctuations, the run is sandwiched between two senior water rights holders—the Shoshone hydroelectric dam and power plant, just upstream, and downstream Grand Valley irrigators—which basically guarantees that at least 1,250 cubic feet per second of water rush through the reach.

The convenient arrangement for boaters and outfitters is also the crux of the tenuous position of river recreation: Rafting, fishing, and other riverside leisure often occur as a fortuitous benefit of other water uses. Tailwater fisheries below reservoirs provide some of the best fishing in the state, and many boating runs thrive as side effects of flow allocations for agriculture and other downstream legal obligations.

Communities and businesses in the Colorado’s mainstem basin, from Grand County to Grand Junction, are fully aware that their economies also ride the flows and would likely run aground without river recreation. Commercial boat trips along the Colorado River mainstem in the state contributed more than $33.6 million in total economic benefits in 2010, not to mention the effects of private paddling excursions and fishing activity. And that says nothing about the state’s $2 billion ski industry, much of it concentrated along the mainstem and its tributaries, which counts on river flows and reservoir storage for snowmaking.

The basin’s rivers also contribute to the region’s overall scenery, attracting visitors for other forms of pleasure seeking, such as riding a bike or driving a car through a river valley, says Ken Ransford, a Carbondale tax attorney and kayaker who participates as a recreational representative on the Colorado Basin Roundtable. And, he adds, “Tourism—hunting, skiing, fishing, backpacking, rafting—is really a big part of western Colorado’s economy.”

The Roaring Fork Valley, which feeds into the Colorado just downstream of Glenwood Canyon, has the state’s longest stretch of Gold Medal trout-fishing waters: 42 continuous miles on the Fryingpan and Roaring Fork rivers. Downstream of Ruedi Reservoir, the tailwater fishery on the Fryingpan is known for its hefty-sized trout, which attract plenty of anglers. A 2002 economic study completed by the Roaring Fork Conservancy tallied more than 34,000 angler user days, including permitted, guided trips, on the lower reach of the Fryingpan in one year, and the report estimates fishing there brings in $4 million annually.

“It’s very clear the ski areas are the economic driver of both Summit and Eagle counties.” – Tom Allender

“It really shows the direct value of fishing to the economy,” says Will Sands, guide and manager at Taylor Creek Fly Shop in Basalt. “Fly fishing in our valley is a very significant economic stimulator for the towns and communities.” Upstream reaches of the Colorado River in Grand, Summit and Eagle counties hold their own in terms of fishing appeal and economic importance, and a number of local fly shops and guide services do brisk business on the Upper Colorado and tributary streams, such as the Blue and Fraser rivers.

Of course, it’s the ski industry that paces the economy of the Upper Colorado counties. A 2001 Colorado State University report found that 25 percent of Summit County’s total income comes from ski tourism, and 37 percent of the county’s jobs are related to skiing. “It’s very clear the ski areas are the economic driver of both Summit and Eagle counties,” says Tom Allender, director of resort planning for Vail and Beaver Creek ski areas.

Skier turnout might fluctuate based on daily snow reports, but the ski areas depend on the annual flows of the Colorado and its tributaries to operate. “We rely completely on our water rights for snowmaking,” Allender says. Like most other ski areas, Vail Resorts stores a multi-year supply of water in several reservoirs to protect against drought and ensure it can make snow during dry winter periods. 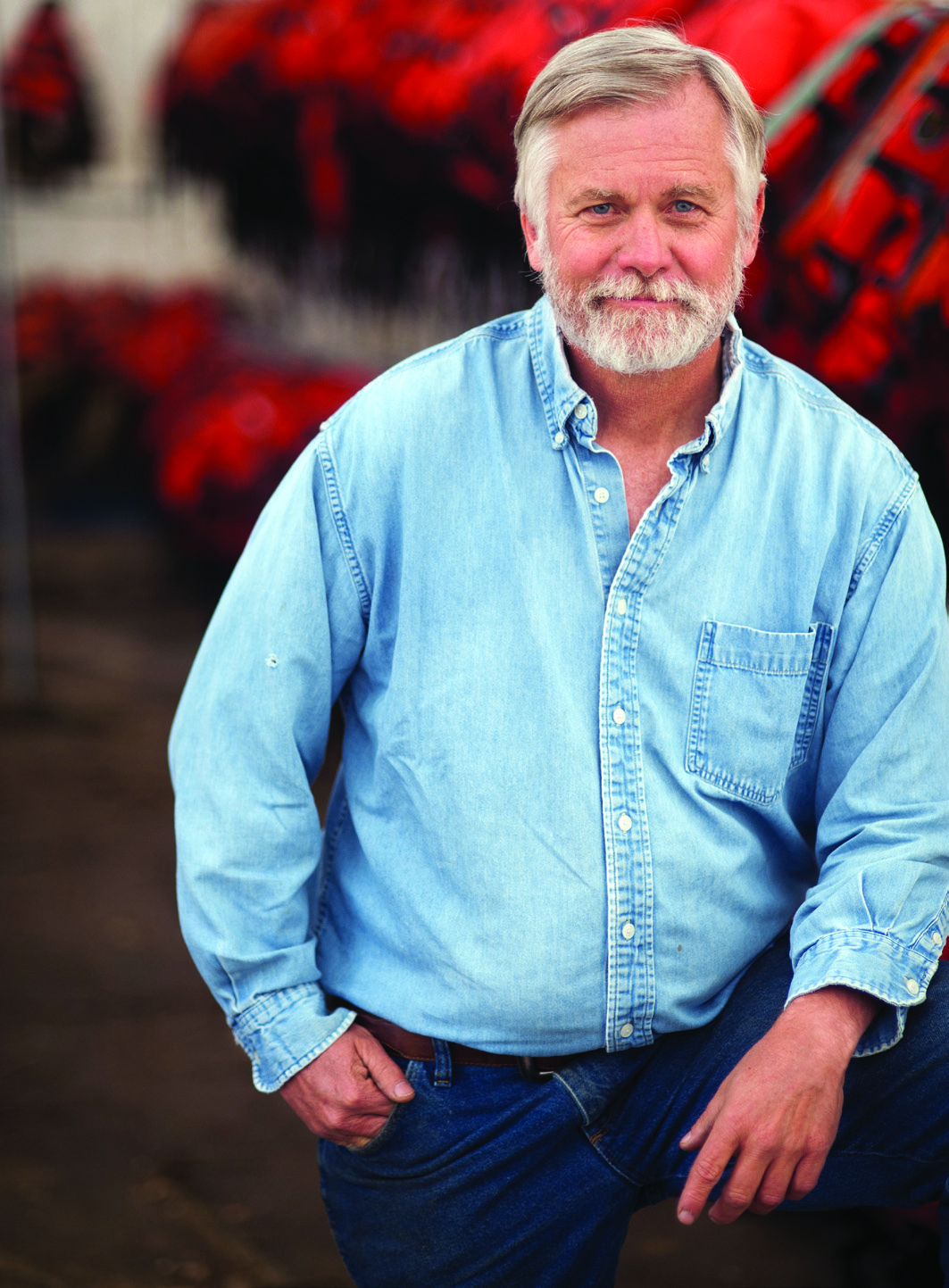 Tom Kleinschnitz has owned Adventure Bound River Expeditions in Grand
Junction since 1986. He attributes part of the state’s rapid population growth to its recreational draw. Photo By: Kevin Moloney

Tom Kleinschnitz grew up outside of Denver, and he drew his first paycheck as a raft guide for Adventure Bound River Expeditions forty years ago. “I knew from the first moment I jumped on the water in June of ’71 that it was going to be incredibly important in my life,” Kleinschnitz recalls. Fifteen years later, he bought the Grand Junction-based rafting company, which guides trips through the tranquil waters of Ruby and Horsethief Canyons and the wild rapids of Westwater Canyon on the Colorado near the state border with Utah. Since then, he has watched business flourish as people’s appreciation for the environment and outdoor experiences has swelled.

A majority of his clients now come from out of state, and Kleinschnitz partly attributes this to the boating industry’s success. He figures that former seasonal guides and past clients get hooked on boating, and they are among numerous boaters who have settled down locally or on the Front Range and now organize their own floats. “From when I bought the company 25 years ago, the state population has gone up quite a bit, and a lot of the reason people come to this area to live is simply because of all the wonderful opportunities, and not only rafting,” says Kleinschnitz, who recently served for three years on the Colorado Tourism Office’s board of directors.

The commercial boating season through Westwater Canyon lasts from April through September. However, Kleinschnitz says local boaters hit the rapids year round. Like the Shoshone run, the flows aren’t entirely natural: Westwater is downstream of the Colorado’s confluence with the Gunnison River, which adds stable flows from the Aspinall Unit of dams, including Blue Mesa Reservoir, in order to help endangered fish downstream. It’s another case of recreation on the Colorado inadvertently benefiting from a separate legal priority for water.

Kleinschnitz and others recognize it’s a precarious situation given the water-development interests for the Colorado River Basin from Front Range communities and the oil shale industry, not to mention the looming threats of downstream calls through the seven-state Colorado River Compact and climate change impacts.

Some communities have sought to protect flows through recreational in-channel diversions (RICDs) and instream flow water rights, both relatively junior in priority but crucial to protecting flows against upstream changes of water rights. RICDs can protect a minimum streamflow in a whitewater park while instream flow rights can do the same for a popular fishing run. Both must be approved by the district water court.

In late 2010, Grand County applied for a RICD on the Colorado River to stake out rights for two whitewater parks, and Carbondale and Pitkin County have pending applications for RICD decrees on the Roaring Fork. However, Glenwood Springs’ new whitewater park has no legal protection against extreme low flows; the city abandoned its effort to secure an RICD in 2009, citing cost issues for legal and technical studies.

The RICDs represent a step toward recognizing the beneficial use of river recreation. But so far, discussions on how to develop the state’s unused share of the Colorado River, based on the terms of the Colorado River Compact, have not sufficiently valued recreational use and environmental needs, according to Ransford.

Ransford remains hopeful that the Interbasin Compact Committee can meet its original intent to facilitate cooperative agreements between different users and regions in the state and protect the Colorado River’s remaining range of flows in order to support both recreation and the environment. “It’s hard when you compare rafting and fly fishing with big industries [like agriculture and energy] in Colorado,” Ransford says, “They may pale in comparison statewide, but what you really need to look at is the impact on local economies here.” 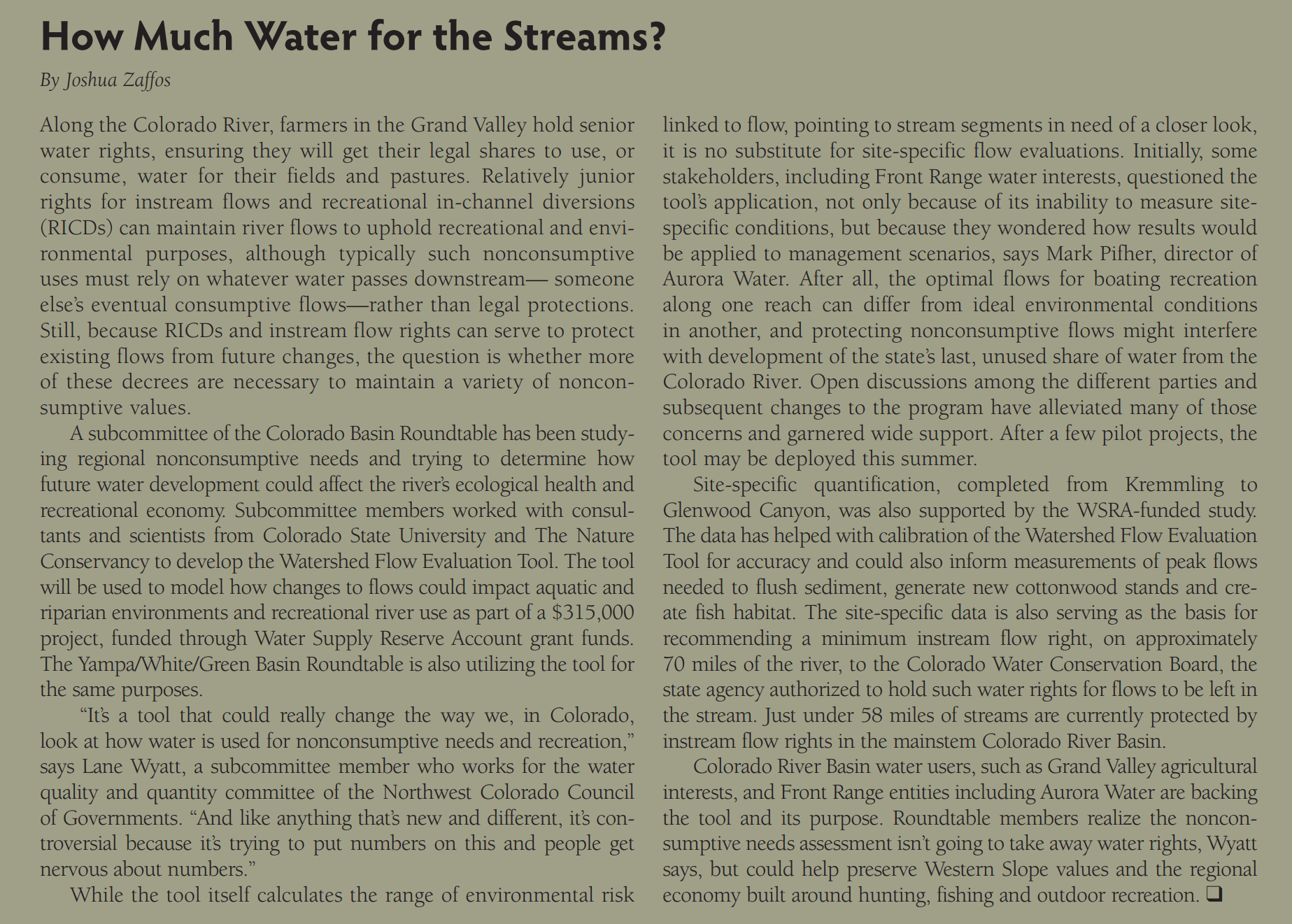