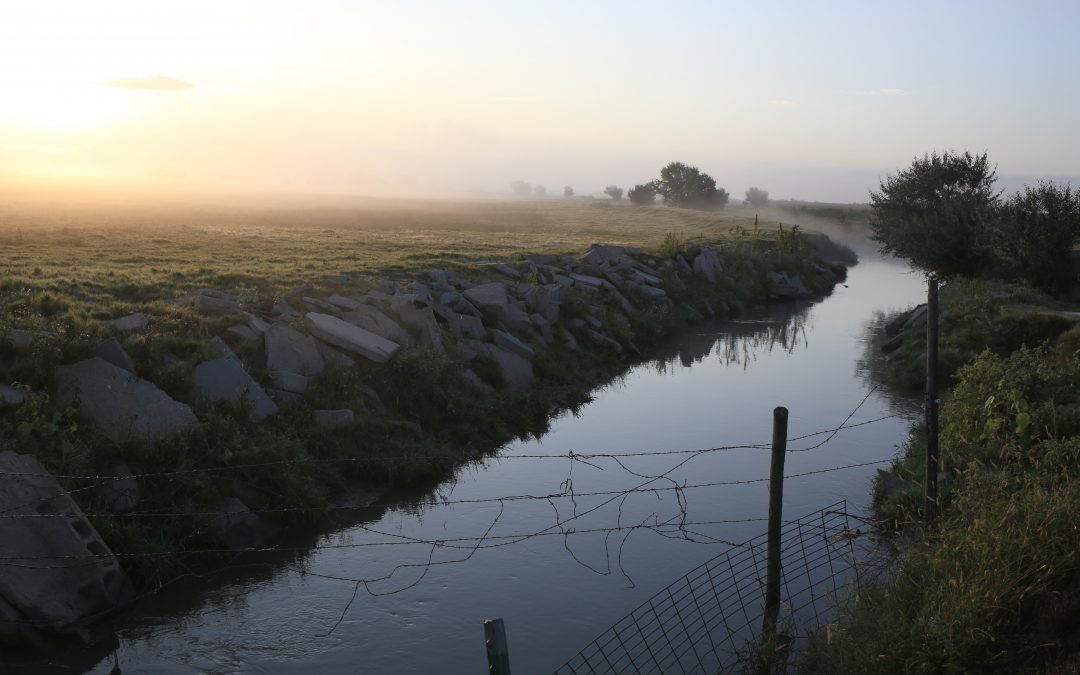 An agricultural ditch off the South Platte River winds through fields near Sterling, Colorado. Photograph by Matthew Staver

The fields of Sterling in May are a dependable trio of colors: yellow with the dried remnants of last year’s harvest; the deep brown of freshly tilled earth, or green from new growth. Another unwelcome hue mars this palette: white. The color of salt. To crops, it’s the color of death.

There aren’t many patches of dead land. But there are enough to worry farmers and water officials that the same fate that felled civilizations could befall cities along the South Platte River: that the land will become too salty to support plant life.

“Salinity is always a concern in agriculture,” says Grady O’Brien, a Fort Collins-based hydrologist who has been tapped to lead a salinity study, initiated by Colorado Corn, along the South Platte.

It’s too soon to tell if salinity is a problem on the South Platte. Preliminary sampling by Colorado Corn in September showed worrying signs. Measures were taken at a dozen points along the river from above Denver to the Colorado state line. As the water flowed downstream, its purity dipped.

Salt is actually a catch-all term for total dissolved solids (TDS), which can include a number of things other than what most know as salt, sodium chloride. “Salt” can be magnesium chloride, uranium, selenium—any minerals, salts, metals, and ions that have dissolved in the water.

“Once the testing got down around Sterling, it was pretty darn toxic in terms of salt,” says Mark Sponsler, chief executive officer of Colorado Corn. The data was concerning enough to take a more in-depth look.

The full study will review historical datasets and look to decades of information to reveal if the South Platte has gotten saltier over time, identify seasonal variations, and uncover potential sources of increased salt.

All water, even rainwater, contains salt. When applied to crops or lawns, plants absorb the water and leave the salts behind, which accumulate. Agricultural runoff contributes to salinity, as does the use of de-icing compounds on roads. And as water is used and reused in its journey downstream, each use increases salinity.

On its way to Nebraska, the South Platte winds through crops and stockyards, past thousands of oil and gas wells, and near towns. It all “keeps adding to that salt load,” O’Brien says. “Salinity is increasing all the way through the basin.”

And despite the few crusty fields near Sterling, he says farmers aren’t yet worried because conditions are no different than in years past. Still, they’re looking forward to what the data says. The study is scheduled to be completed in late October.