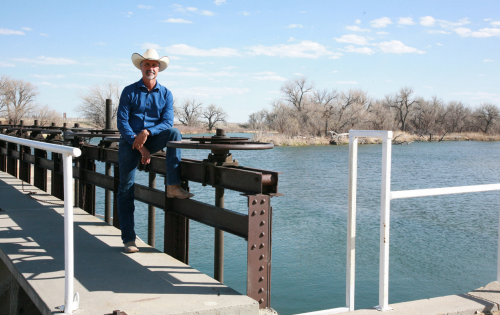 Jim Yahn, manager of the North Sterling Irrigation District, stands on the structure where water is diverted from the South Platte River to Prewitt Reservoir. A deal with Parker Water could mean repairs for Prewitt and new water storage for eastern Colorado. Photo by Vickie Smith

For the Parker Water and Sanitation District, collaboration is a guiding principle when it comes to water storage. To add supply for its 50,000-person Douglas County district and surrounding agricultural users, Parker acquired land that had water rights in Prewitt Reservoir, the 32,000 acre-foot reservoir south of Sterling, which it could pump more than 100 miles south to store in its own reservoirs. The Prewitt Reservoir was built for sugar beet farmers in northeastern Colorado, where North Sterling Irrigation District manager Jim Yahn says he worries that having municipalities draw from it could end up taking storage from agricultural users. Yahn encouraged Parker to consider a way to serve all users, including farmers.

“Buy and dry is the old way, and on the one hand, it’s probably easier to do it that old way. But it’s not the right way,” says Ron Redd, executive director for Parker Water. “Farmers have knowledge and they’ve helped us out on what we can and can’t do. When multiple stakeholders benefit, it’s a win all around.”

Parker is now looking at two new reservoirs, both on the Eastern Plains: a 6,000-7,000 acre-foot site near Iliff, northeast of Sterling, and, eventually, a 72,000 acre-foot site near Fremont Butte, southwest of Sterling and still some 100 miles from Parker’s Rueter-Hess Reservoir. Not only will they serve Parker, but through a partnership with the Lower South Platte Water Conservancy District, local agricultural users could draw from the reservoirs as well. The project will efficiently convey water through existing and improved Prewitt infrastructure.

Project partners are still working out how to share the water, but Yahn says the partnership represents a new way of thinking. “Even if agriculture can’t afford a new storage project, a new storage project can incorporate agriculture.” Parker will offset some maintenance costs for Prewitt when it draws from the reservoir as part of a deal Yahn describes as “a little like a toll road.”

Redd says the deal is just the start of work that could continue with the collaborative South Platte Regional Opportunities Water Group.

“Partnerships are hard and that’s why most people used to go it alone,” Redd says. “But our customers pay us to do the hard work and we’re seeing a lot more benefits when we partner with other districts.”