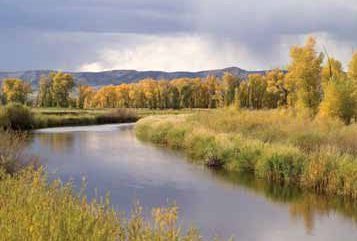 Autumn view of the wetlands and cottonwood groves in the Yampa River basin at Carpenter Ranch, located west of Steamboat Springs, Colorado. Photo courtesy of The Nature Conservancy.

Unlike other tributaries of the Colorado River, the Yampa is a master sculptor. During the spring and summer floods, when melting snows turn the Yampa into a roaring torrent of chocolate-brown rapids, the river is constantly creating new habitat as it destroys the old.

Unimpeded by any major dams, the Yampa is one of the few remaining rivers in the West that still functions as it has for millennia. Despite several diversions that feed small reservoirs on the Yampa’s upper reaches, its natural hydrograph—the river’s historic seasonal flow pattern—persists, sustaining a host of distinctive ecological features. Among them are globally rare cottonwood gallery forests, four federally endangered fish species, state-listed fish, and a wide range of wildlife.

John Sanderson, senior freshwater ecologist with The Nature Conservancy of Colorado, says the Yampa is really central to the ecology of the entire Upper Colorado River system. With relatively few depletions from its annual flow of about 1.6 million acre feet, the Yampa plays a disproportionately large role in sustaining flows into the Green River and eventually the Colorado. “That contribution is really critical for the overall maintenance of the endangered species habitat.”

Key to the Yampa’s ecological function is its flood pattern. The river swells each year between late April and the end of June. Boulder water attorney David Harrison, senior advisor to The Nature Conservancy’s Global Freshwater Team and Colorado Water Trust board member, calls these periodic large flows, laden with silt, “the most dramatic feature of a naturally functioning river.”

“A big flood reshapes the river,” Harrison explains. “Sometimes it alters a meander, chopping away at the old outside bend, planting trees on the new inside bend.”

Mid-sized floods are also important. Every time the Yampa rises out of its banks it re-nurtures the hay meadows and marshes. Such a connection with the flood plain, an increasingly rare feature of most rivers, is “key to the whole food chain,” says Harrison. By “resetting primary productivity for the river,” floods prompt zooplankton to flourish in the wetlands and provide sustenance for native fish, including the four federally endangered species: razorback sucker, bonytail, humpback chub and Colorado pikeminnow.

Sanderson elaborates on this dimension:

“Riparian vegetation helps form the basis of the food chain—the leaves and branches that drop into the river become organic material for small bugs, which work their way up the food chain for fish and other aquatic species to eat.”

The riparian forests are also crucial for terrestrial and avian species. One of the watershed’s best examples of such dynamic habitat is at Carpenter Ranch near Hayden. The 910-acre working cattle ranch lies adjacent to The Nature Conservancy’s 329-acre Yampa River Preserve and is a living laboratory for exploring how ranching can coexist alongside sensitive riverine habitat.

The big flush provided by the Yampa’s spring peak serves another critical function, says Tom Chart, a U.S. Fish and Wildlife Service fisheries biologist who directs the Upper Colorado River Endangered Fish Recovery Program: it provides cues for endangered and native fish that are essential to their spawning behavior. The fish sense when the flows are rising and water temperatures warming, prompting them to head for their traditional spawning grounds.

“That natural hydrograph is something we have really tried to promote with our recovery program,” Chart says.

The endemic Colorado pikeminnow, which co-existed with dinosaurs millions of years ago, uses the high flows to migrate toward very discrete spawning areas in the upper basin, says Chart. The fish journey more than 200 miles to the riffles and gravel bars of the Yampa Canyon and the middle Green River, just below the Yampa convergence. Here, they commence spawning as soon as the flows start to drop off and the river begins to warm, conditions that would be compromised with any large-scale future diversions on the Yampa, says Harrison.

Recovery program intervention
At one time, healthy populations of Colorado pikeminnow lived 50 or more years, growing to 6 feet and weighing up to 80 pounds. According to Chart, the feisty fish, valued for food and sport by early settlers, is starting to rebound on the Green. Chart attributes some of its recovery to his program’s efforts to remove non-native fish from its habitat and to better manage flows entering the Green. But he added that the population may wane again as it responds to environmental conditions, including flow rates and water temperatures.

The Yampa River approaches its confluence with the Green River in Dinosaur National Monument, which was established in 1915.

“The Yampa is still reeling from the drought that occurred in the early 2000s,” says Chart. “The whole fish community went through a devastating blow during that time.” State-listed native fish like the bluehead sucker and flannelmouth sucker, identified by the U.S. Fish and Wildlife Service as at-risk but not yet threatened or endangered, took an even greater hit than the federally-listed endangered species.

The low flows were a boon, however, for non-native smallmouth bass, northern pike and channel catfish, introduced sport fish that are a big threat to the indigenous species on which they prey. These species, which are native to the Mississippi Basin, flourish in steady, warmer water, and began to displace native species adapted to the Yampa’s unique temperature, flow and sediment regimes.

Nonetheless, Harrison notes that, “The Yampa is the last remnant habitat of the best populations of the Upper Colorado River endangered fish.”

Chart’s program is proactively reducing numbers of non-native game fish, especially the prolific smallmouth bass. During the spring, crews contracted with Colorado State University use laborious electrofishing methods to remove unwanted fish along 160 miles of the Yampa’s mainstem between Hayden and its confluence with the Green. A force field is created, fish within it are stunned and netted, identified in the boat, and, if they are native species, returned. If an endangered fish is captured, it is measured, weighed and tagged. Non-native species under 10 inches are euthanized, while larger specimens are relocated for sport fishing. This transfer to off-channel fisheries has helped appease opposition from some anglers to the non-native removal process, says Chart.

Maintaining river habitat conducive to the endangered fish is a critical part of managing the Yampa. Ironically, a 2007 expansion of Elkhead Reservoir, which diverts from Elkhead Creek, a Yampa tributary upstream of Craig, has been important to those efforts. As part of a multi-party agreement to double the reservoir’s storage capacity to provide more water for the city of Craig and allow pursuit of future dams on Yampa and Colorado tributaries, the arrangement ensured that 5,000 acre feet of water is permanently reserved for endangered fish.

While Chart says it was a difficult trade, expanding Elkhead has allowed them to make supplemental releases of water in late summer, when base flows are very low. Previously, when the river would be heavily tapped by ranchers flooding harvested hay fields to generate fall pasture for livestock, the lower Yampa turned into “a series of connected pools that smallmouth bass just loved,” says Chart. “We’re still trying to figure out exactly what the right flows are during that time of year, but it’s got to be more than zero.”

Geoff Blakeslee has managed Carpenter Ranch for the Nature Conservancy since 1996.

The roundtable’s role
Figuring out the “right flows” to sustain native fish is one part of a wider assessment of the Yampa’s non-consumptive uses—environmental or recreational—that is currently underway. The Yampa/White/Green Basin Roundtable is directly engaged with this non-consumptive needs assessment, which began in 2006.

The first part of the assessment involved bringing together a diverse group of residents representing ranching, energy, recreation and environmental interests who worked together to identify and map non-consumptive attributes. On the Yampa, such features include habitat sustaining native fish, especially the four endangered species; the rare riparian forest; and recreational uses including boating, whitewater rafting and fishing. Agreement on these attributes, reached in April 2009, was achieved through “a very difficult process,” says Blakeslee, who serves on the roundtable’s non-consumptive needs assessment subcommittee.

Blakeslee has a unique background, affording him credibility with multiple stakeholders. Not only is he the roundtable’s environmental representative, but he has also ranched in the valley for nearly 40 years. The key to gaining consensus, Blakeslee believes, is “maintaining open dialogue, being receptive and understanding each entity’s point of view and concerns.”

Landowners have helped identify stream segments where the non-consumptive attributes prioritized by the group are present. The next step—Phase II—is quantification, says Blakeslee. “How much water does it take to sustain a riparian plant community, or to keep four endangered fish species alive? What level of drought or consumptive use would be tolerable and still allow those attributes to survive?”

Although some roundtable members have been wary that identifying and quantifying non-consumptive needs will threaten the region’s ability to provide water for municipal and industrial uses, Blakeslee says they’ve developed trust. “The concern is still there,” he says, “but our intent is to use this information to work together to understand the full impact of future water developments.” 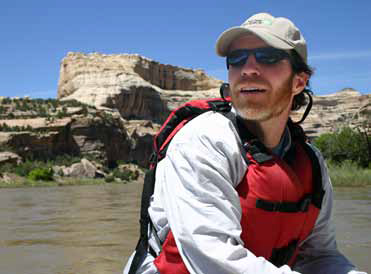 John Sanderson says the Yampa is central to the ecology of the entire Upper Colorado River system.

Sanderson notes that future planning would also have to factor in climate change and energy-related water development, both of which would put added pressure on the Yampa.

The non-consumptive needs assessment should be complete this summer. Meanwhile, the Yampa is protected in part by the U.S. Fish and Wildlife Service’s Programmatic Biological Opinion, or PBO. The PBO currently allows for 50,000 acre feet of future development on the Yampa without hurting fish recovery efforts. “We believe that if depletions are kept within the allowances described within the PBO, the fish will be fine,” says Sanderson.

But the fish’s fate is also “contingent on us reducing the threat of non-native fish out there,” says Chart.

One thing, however, is certain about the Yampa: pressure on its lavish flows will only increase. Some of the pressure comes from the Front Range as it locates more water for its growing population. The proposed Yampa River pumpback project would store water in a new 500,000 acre-foot reservoir near Maybell before pumping it across the Continental Divide. The reservoir’s dam would lie directly within critical habitat for endangered fish, which Chart says begins 60 miles upstream from Maybell, at Craig.

Sanderson finds a degree of reassurance in the protection inherent in the Endangered Species Act and the critical function the Yampa plays in supporting endangered fish, as well as the Yampa’s role in helping Colorado meet its interstate compact delivery requirements on the Colorado River.

“Large water developments on the Yampa have big challenges ahead,” he says. “The level of ecological analysis to which they must be held is very, very high. The Yampa is too critical to let a cursory level of analysis suffice.