The Cost of Recovery 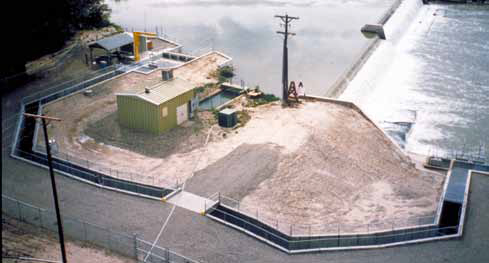 A fish passage at Redlands Water and Power Company on the Gunnison River in western Colorado was constructed in 1996. A fish screen built in 2005 keeps endangered and other fish from becoming trapped in the canal. Photos courtesy of the Upper Colorado River Endangered Fish Recovery Program.

When it came to water, our predecessors made survival choices with little thought of implications to the ecosystem.

More recently, 20th century dams were built for human needs—without considering native fish and their habitats.  Decades of water diversion and manipulation have altered the natural flow cycles fish depend on, often bringing river levels dangerously low or sometimes even releasing too much, too fast from reservoirs so that fisheries are destroyed.

However, thanks to an unprecedented legal agreement, the Upper Colorado River Endangered Fish Recovery Implementation Program, the recovery of these endangered fish is a regional priority—one that has received nearly $180 million in funding to date. Although the 22-year-old program has been largely successful, enabling communities dependent on Colorado River water to continue making depletions while seeing growing numbers of the native fish, the price tag isn’t exactly negligible. Now that we know more about how our actions affect aquatic ecosystems in Colorado, can we circumvent the listing of additional species?

John Loomis, a professor of agricultural and resource economics at Colorado State University, believes it is important to address a species’ vulnerability before its numbers get dangerously low because there will simply be a wider range of more productive options for recovery. “I liken it to heath care,” says Loomis. “Do you want to wait until you are in the E.R.? Preventative health care is cheaper than triage.”

“Of course it is cheaper and easier to save a species before it becomes endangered,” agrees Dave Campbell, director of the San Juan River Basin Recovery Implementation Program. “But unfortunately our system doesn’t operate that way. We wait until they are at the brink and then deal with the problem.”

That said, Campbell himself is a communications hub between the San Juan recovery program—which has similar goals for two of the four fish species that are part of the Upper Colorado recovery program—and overlapping efforts to prevent additional species with declining populations from becoming endangered. In the San Juan, removing non-native species, building fish passages to enable migration, and increasing seasonal peak flows to more closely resemble historic conditions are actions underway to keep populations from dropping further. 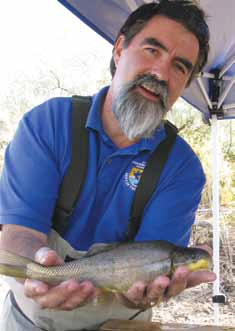 Although regulation under the Endangered Species Act and the looming threat of litigation ultimately provided the impetus for the groundbreaking Upper Colorado recovery program, signed in 1988, there are other reasons to recover a species. “These fish date back to the prehistoric era,” explains Tom Chart, program director for the Upper Colorado River Endangered Fish Recovery Program. “They have survived for millions of years and this is the only place they are found. If they can no longer survive here there are serious implications for the other species.”

Like a canary in a coalmine, the Colorado pikeminnow is an indicator species and its disappearance signals big problems within the river. Food webs are complex, and the relationships between species aren’t always direct. If an element of that web struggles or disappears, the consequences could range from prey species going unchecked to water quality deterioration. “Everything is out there for a reason,” explains Chart. “You can’t remove an animal without expecting something to compensate. And usually those compensations are negative.”

The impact on an ecosystem from a lost species is complex and unpredictable. It’s just one reason the Endangered Species Act was designed with teeth. In 1983, the U.S. Fish and Wildlife Service determined fish living in the Upper Colorado River were in dire straits and proposed a depletion match for future water users: Any water removed would need to be replaced acre foot for acre foot.

It was a jeopardy ruling backed by the strength of the Endangered Species Act. It brought water users, conservationists, three different state governments, and several federal agencies to the table ready to negotiate. The resulting plan set a standard for participation. Water users avoid litigation by joining the program, and recovery efforts are centralized and well-funded. Ultimately, a cooperative community despite disparate interests was born.

“In the end everyone said, ‘Let’s put down our guns, let some water development occur and do it in a way that will help recover the species,’” says Ted Kowalski, chief of the Interstate and Federal Section at the Colorado Water Conservation Board. “I think that is the reason it’s so successful. All the parties are invested in this.”

The Upper Colorado recovery program has served as a basis for similar programs in the San Juan and South Platte river basins. Without this type of cooperation, species recovery would be more uncertain, not to mention more difficult and costly.

“When recovery efforts are driven by demands of individual projects, they are piecemeal solutions,” says Deb Freeman, a Denver lawyer who helped negotiate the Platte River Recovery Implementation Program on behalf of water users. “That’s no way to recover a species.”

But once the details have been hashed out over conference room tables and the lawyers signed off on the details, what does it really take to recover endangered fish? Kowalski and the state of Colorado employ a consolidated approach, tackling the ecosystem as a whole. Essentially, the goal is to restore a hospitable environment through a combination of maintaining and restoring needed flows, stocking programs, fish passage construction, and the removal of non-native species.

Together, the Upper Colorado and San Juan recovery programs have spent $209 million since 1988, much of the funds coming from revenue generated by the same federal hydropower dams that have adversely impacted flows. The Platte River Recovery Implementation Program—an agreement signed between Colorado, Wyoming and Nebraska in 1997—has cost $314 million, with the federal government matching the three states’ combined $157 million. These price tags are determined by the cost of recovery efforts and don’t, of course, represent the true value of species recovery. 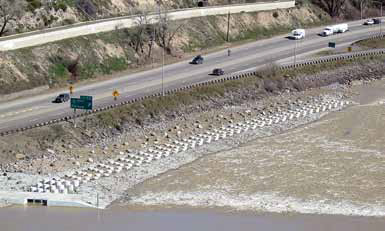 Construction of the Price-Stubb fish passage was completed in summer 2008, removing the last barrier to fish migration in 290 miles of the Colorado River from Utah’s Lake Powell to the upper end of endangered fish critical habitat near Rifle, Colorado. Photo Courtesy of Western History Collection, Denver Public Library

In Australia, where a catastrophic drought and decades of excessive water allocation have spurred a $12 billion water conservation project in the vast Murray Darling Basin, the cost of species recovery changes daily. To secure additional flows for the environment, the Australian government has set aside $3.1 billion and will keep raising its paddle in the virtual auction that is the basin’s open and transparent water market. Part of the basin’s broader plan, scheduled for release in 2011, will include legal diversion limits on the flows that can be taken from the basin as a whole. A government-commissioned report released in October 2010 stated that a reduction of as much as 37 percent from current diversions will be necessary to bring the system back into balance. The two-year-old Murray Darling Basin Authority, a federal agency charged with bringing sustainability to the vast basin, has published clear goals for its native fish populations: Bring native fish communities back to 60 percent of their estimated pre-European settlement levels by 2054. Meanwhile, the authority and other private groups are working to help local communities and governments find livable solutions to the substantial, controversial reduction in diversions that will be required. 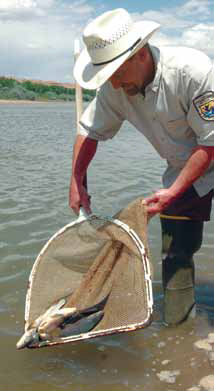 Hatchery-raised razorback suckers are stocked in the Colorado, Green and Gunnison rivers in Colorado and Utah as part of efforts to recover the species. Photos courtesy of the Upper Colorado River Endangered Fish Recovery Program

The similarities in decreased fish populations and the strategies for recovery in the Murray Darling Basin are shockingly similar to Colorado, says Brad Udall, who directs the University of Colorado’s Western Water Assessment. Udall has twice visited the Murray Darling Basin and plans to spend three months there in 2011 working for the South Australian government. “Maybe this is a naïve viewpoint from a foreign visitor, but in Australia there is a real concern about environmental issues that goes beyond what you see in the U.S.,” says Udall. “The idea there is that these fish should function in a natural way and that nature deserves equal footing with human needs. I liken their vocabulary around water and reform to the way we talk about national security in the U.S.”

Whether Colorado’s water community is more motivated by the value of a species’ survival or the threat of water use being limited by the Endangered Species Act, its goal regarding species recovery is twofold: getting species delisted and preventing them from being listed to begin with by ensuring populations are viable. Today there are nearly a dozen fish species of state concern noted at the Colorado Division of Wildlife. “I’m not a biologist, but there’s a definite incentive for the states and all the parties involved to help those fish so they never get listed in the first place,” says Tom Pitts of Water Consult, based in Loveland, who represents Upper Colorado Basin water users and helped negotiate the original recovery program.

As Australia confronts the crisis of a drying river, Colorado has an opportunity to heed lessons from across the globe. By investing in habitat improvement before species hit critical lows, such profoundly expensive and dramatic remediations might be avoided.