From Faucets to Forests

Long before accelerated climate change, epidemic pine-beetle infestations and unprecedented population growth threatened to change the Western way of life, the framers of the 1897 Organic Act understood the connection between a healthy forest and a quality water supply. The purposes they hoped to achieve through the inaugurated Forest Reserves, which preceded the National Forest system, included “securing favorable conditions of water flows.”

Rocky Mountain Regional Forester Rick Cables wants to bring water back to the forefront of the United States Forest Service’s charge. “I think that the value of water as we move forward into this century is going to increase exponentially,” he says, “It’s already huge, and people don’t necessarily understand that.”

As population grows in the Interior West, the arid region is also expected to be hard-hit by climate change, Cables says. “That’s pretty spooky. We have to be thinking ahead.”

Mike Anderson, senior resource analyst with The Wilderness Society, echoes Cables’ concerns, noting that declining water supplies during parts of the year coupled with rising demand for water will require some careful planning.

With such changes on the horizon, maintaining healthy forested watersheds will be essential. Not only do forested ecosystems provide filtration services, they also serve to lock in the soil, preventing the migration of sediments that can clog waterways and water supply infrastructure.  In addition, by absorbing and slowing the path of rainfall, forests mitigate floods, protecting stream and river channels from erosion. As water moves through the forest, pollutants such as metals, viruses, oils, excess nutrients and sediments filter out.

Maintaining these natural functions, says Joan Carlson, a water quality hydrologist with the Forest Service, is preferable to restoring a system that can no longer function after years of poor management, whatever the system may be. “Keeping these processes going is a lot easier than trying to clean the water later.”

Connecting Water Providers to the Forest

Eight years ago, on a bus ride home from an Earth Day field trip on the South Platte River, Cables chatted up the idea of collaborating on a watershed health project with former Denver Water chief Chips Barry.  “I sort of nudged him and said, ‘Hey Chips, wouldn’t it be cool if we could somehow connect your water users to their watersheds in a manner that would allow them to invest in the watershed and allow us to maintain it in a healthy state?’” Cables recalls. 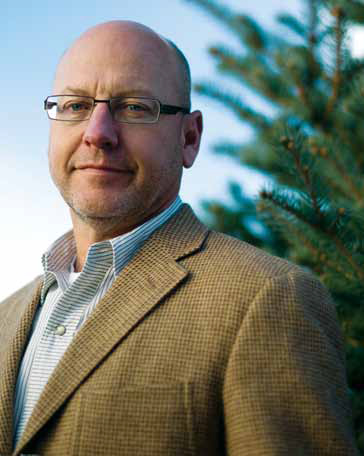 That idea transpired in August 2010 when Denver Water—which serves 1.3 million people—and the Forest Service entered into a five-year, $33 million partnership called Forest to Faucet. The partnership will consist of projects to improve the health and resiliency of five watersheds spanning 38,000 acres of Colorado’s National Forest lands—the Upper South Platte, South Platte River Headwaters, St. Vrain River, Colorado River Headwaters and Blue River watersheds—which supply the vast majority of Denver Water’s drinking water. Each agency will contribute $16.5 million. The cost to the average Denver Water ratepayer is expected to be $27 over the course of five years.

During the first five years of the partnership, activities will revolve around reducing wildfire risk through forest health treatments such as thinning trees and applying prescribed fire. Claire Harper, regional water partnerships coordinator for the Forest Service, says the agency, which is restricted from entering agreements longer than five years, views the partnership’s initial memorandum of understanding as setting the stage for a longer-term program. If both entities choose to move forward, they will pursue additional goals that include restoring areas still recovering from past wildfires and minimizing erosion and the sedimentation of reservoirs. Projects could include tree planting, riparian vegetation improvements as well as decommissioning and improving roads and reclaiming mines.

Regardless of which projects the partnership tackles, Anderson hopes they will be performed in a way that doesn’t defeat the purpose. Work crews should be especially careful around riparian areas and on fragile soils, he cautions, noting that ground equipment can cause erosion that pushes sediment into streams. Anderson would ideally like to see citizens’ advisory groups help design activities and ensure projects are completed in an environmentally sensitive manner.

In addition to lessening the risk of a catastrophic fire, thinning and removing dead trees will mitigate another major threat on the horizon: falling trees. “It’s almost as if you can see the hurricane three years out,” Cables says, calculating that an average of 100,000 trees killed by pine beetles will fall every day for 10 years. Trees could fall on water transmission facilities like ditches and pipelines. Fallen trees could also close roads or divert drainage patterns designed for roads and trails, causing water to pool and erode the road base and increase sedimentation, says Cables.

Engaging in forest stewardship for the purpose of its water may not be revolutionary, but garnering financial support from a watershed’s direct beneficiaries to pay for explicit investment in health initiatives on public land is a relatively new concept. Similar arrangements—sometimes called user contribution or payment for ecosystem services programs—like one in New York’s Catskill Mountains and another in Santa Fe, New Mexico, are among those breaking trail in a demonstrably effective direction, with others catching on.

What makes Denver Water and the Forest Service’s Forest to Faucet partnership unique among similar programs is its scale. Santa Fe’s project, which Harper looked to as a model, involves one watershed in one forest, while Forest to Faucet’s five priority watersheds span three forests and six ranger districts.

The Forest Service hopes the partnership will serve as a model it can expand to other utilities. According to the agency, nearly 90 percent of the 14.5 million acres of National Forest lands in Colorado lie in watersheds that contribute to public water supplies. And the benefits of caring for Colorado’s ecosystems extend beyond the Rockies: Colorado’s headwaters provide surface water to more than 30 million Americans in 18 states.

“I think we have a special responsibility in this region because we have the high headwaters. There’s no real comparable example of a headwaters of that scale with that reach anywhere in the country,” Cables says.

By entering financial partnerships and focusing on priority watersheds for utilities, the agency will have greater resources to address high-risk zones upslope of water reservoirs and intakes. What the partnership is really doing is expanding and accelerating that work, Harper says.

It makes sense for Denver Water, too. “We’re in the watershed business,” says Don Kennedy, an environmental scientist for the utility, noting that when the Buffalo Creek fire burned 12,000 acres in the South Platte watershed, Denver Water realized it needed to take more ownership of forest health.

In the wake of the 1996 Buffalo Creek and 2002 Hayman fires, Denver Water has racked up more than $11 million in expenses.  The agency’s bill, ultimately expected to exceed $40 million, includes dredging Strontia Springs Reservoir, where the tide of sediment and debris flowing from the burned forests has not let up. “It hasn’t gone away, it keeps accumulating,” Kennedy says.

Removing dead trees killed by mountain pine beetles is a major focus for Denver
Water and the U.S. Forest Service, who will take on the task together across 38,000
acres in Colorado. Courtesy of istock.com

If Denver Water and the Forest Service’s Forest to Faucet represents a 5,000-foot view of the watersheds that Denver taps, the Colorado Statewide Forest Resource Assessment and Strategy takes a 30,000-foot view of the entire state. Completed by the Colorado State Forest Service in June 2010, the statewide assessment and accompanying strategy were mandated by the 2008 Farm Bill.

The assessment provided a spatial overview of Colorado’s forests and identified priority areas for focusing resources. “If we have limited resources, you want to spend those resources where you have the greatest opportunity to make a meaningful difference,” says Joe Duda, who supervises the state forests’ management division and took the lead on the assessment and strategy.

Among the emphases on watershed health, the assessment stressed protecting soil and preventing erosion, enhancing soil moisture storage and groundwater recharge, reducing flooding, filtering contaminants and maintaining the plant communities that contribute to this process.

“We also looked at opportunities where we could leverage resources,” Duda says, noting the agency also plans to work with private landowners that have landholdings in areas that affect the watershed.  “The first thing we want to do is address the priority watersheds,” Duda says, “But we want to do it in a way that is not just a piecemeal strategy, so what we’re doing can effect meaningful change on the landscape.”

Forest managers in 1897 may have recognized the need for securing favorable water flows, but surely they could not have predicted the fragmentation of the natural and urban worlds. Some people living in modern, urban society think their milk comes from Safeway, two-by-fours from Home Depot, and water from their faucets, Cables says. “I would love to connect people to the national forest and mountains in a way that they would understand. I think that would be a wonderful thing to accomplish.”

Publicizing forest health projects as avenues to protect water supplies and save ratepayer dollars in the long run might just serve as a first step toward that goal.