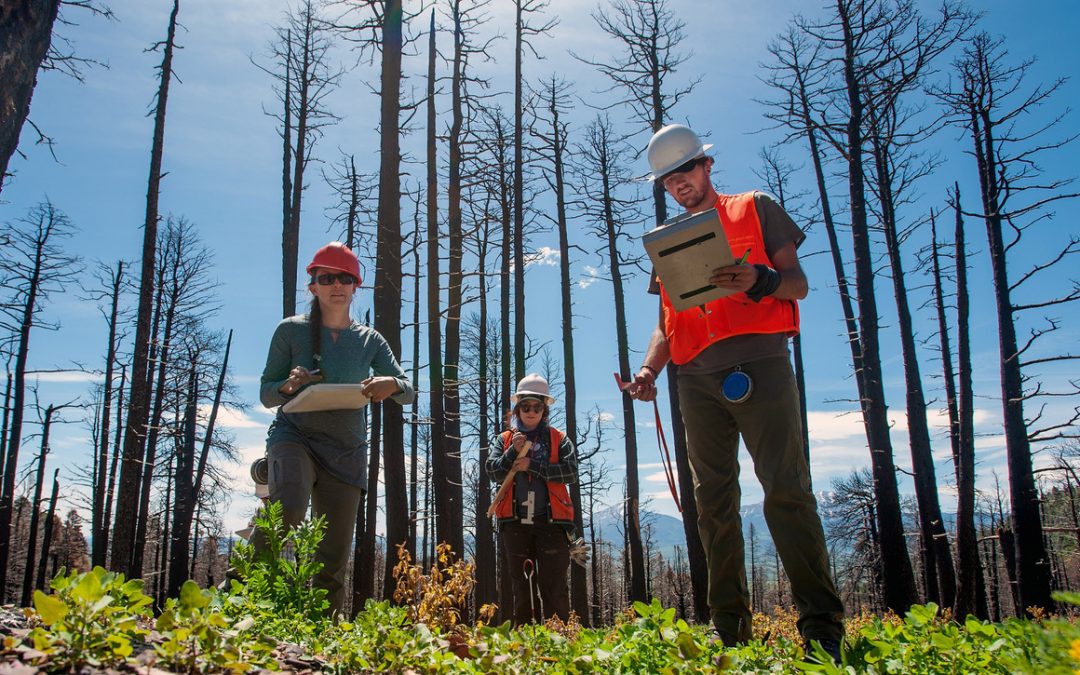 A 2017 University of Colorado study analyzing 15 burn scars left from fires in Colorado and New Mexico found that as many as 80% of the plots did not contain new seedlings. In a 2020 follow-up study project under different climate change scenarios, the most severe scenario, where climate change continues unabated through 2050, showed as many as 95% of ponderosa pine and Douglas fir forests would not recover after a fire. In a “moderate” scenario where emissions decline after 2040, more than 80% of the forest would be replaced by scrubby grassland.

That, said study author Kyle Rodman, could have serious implications for waterways, due to the lack of established trees to stabilize soil and reduce the risk of flooding.

“Just because there aren’t trees doesn’t mean there’s no vegetation. Grasses and shrubs can hold back the soil, but it won’t be the same,” says Rodman, now a postdoctoral research assistant at the University of Wisconsin.

Nearly two decades later, the site of the 138,000-acre Hayman Fire, which burned in an area southwest of Denver in 2002, is still marred with patches of bare ground. That fire, according to a U.S. Forest Service (USFS) study, was so severe in areas that it consumed the canopy foliage as well as the seed bank for the forest’s ponderosa pines and Douglas firs, limiting regeneration. Overall, the study predicted “gradual return to preferred conditions” in the Hayman Fire area, though some of the worst-hit patches may see permanent vegetation changes.

In lower elevations, some of the heartier species, like the ponderosa pine and Douglas fir, are having trouble regrowing because of the increased heat and months-long drought. A 2018 study found that even seedlings of those species that were given supplemental water in burned areas had lower survival rates than expected because of the harsh natural conditions.

“When you’re planting a garden, those first few days are so critical. The plants need water to establish their roots and get healthy,” Rodman says. “Trees work a much longer timescale. Those first few years should be cool and wet and we just don’t have those conditions too often.”

Some tree species, like the high-elevation lodgepole pine, generally rely on fire because the heat helps them open and release seeds. But recent fires are burning so intensely that even lodgepole cones are consumed.

A 2020 study in BioScience found that burned forests are showing “major vegetation shifts” and recovering more slowly than expected. In some cases, heartier species might give way to drier shrub-dominated vegetation that can burn more easily. The study found that, generally, those post-fire “forested areas  will have climate and fire regimes more suited to drier forest types and non-forest vegetation.”

That means that hearty forests used to adapting to natural changes are now facing conditions “outside the realm of the disturbances that some forests can handle,” says lead author Jonathan Coop, a professor of environment and sustainability at Western Colorado University.

“We have this paradigm that fire is a natural part of the forest and that forests will always recover,” Coop adds. “These days, we shouldn’t count on that.”

That vegetation shift is especially worrisome for waterways. Normally, forest floors soak in rain and snowmelt, releasing it to waterways slowly throughout the spring and summer. Burn-scarred watersheds, however, have faster runoff and a lower water yield because of the loss of natural material and because of hydrocarbons from smoke permeating the soil. A USFS analysis found that more than 50% of wildfire-scarred land area in Colorado showed increased erosion potential, mudslide threats, and sediment in streams for at least 3-5 years after a fire.

“The drought cycle is bigger and the wet cycle is more intense,” Robichaud says. “The perfect storm is a high-severity fire followed by a high-intensity rainfall event.”

The harsh natural conditions, as well as widespread damage from bark beetles, has complicated typical recovery efforts. Some scientists say the rapid changes in forest conditions and fire characteristics make it hard to know what the best recovery strategy is. In some forests, for example, aspen trees that regenerate from low-ground structures rather than relying on seeds to sprout may dominate. Especially in low-elevation areas, shrubbier species like the Gambel oak may regrow faster in forests once driven by conifers.

While replanting is a natural step in recovery (USFS hosts six national nurseries that act as seed banks, although it has restrictions on where certain species can be planted), there are even concerns that the natural conditions should prompt a re-examination of how best to revitalize forests. Ultimately, Coop says, we should expect that forests may not look the same as they did in a pre-megafire era.

“I think this points to the need for all stakeholders and the public to start to think outside the box as far as how we evaluate the forests and ecosystems we depend on,” says Coop. “We might have to think about what ecosystems we are saving and under what circumstances we’ll have to let things go and let some changes unfold.”

This article was first published in the Headwaters magazine Fall 2021 issue.

Jason Plautz is a journalist based in Denver specializing in environmental policy. His writing has appeared in High Country News, Reveal, HuffPost, National Journal, and Undark, among other outlets.