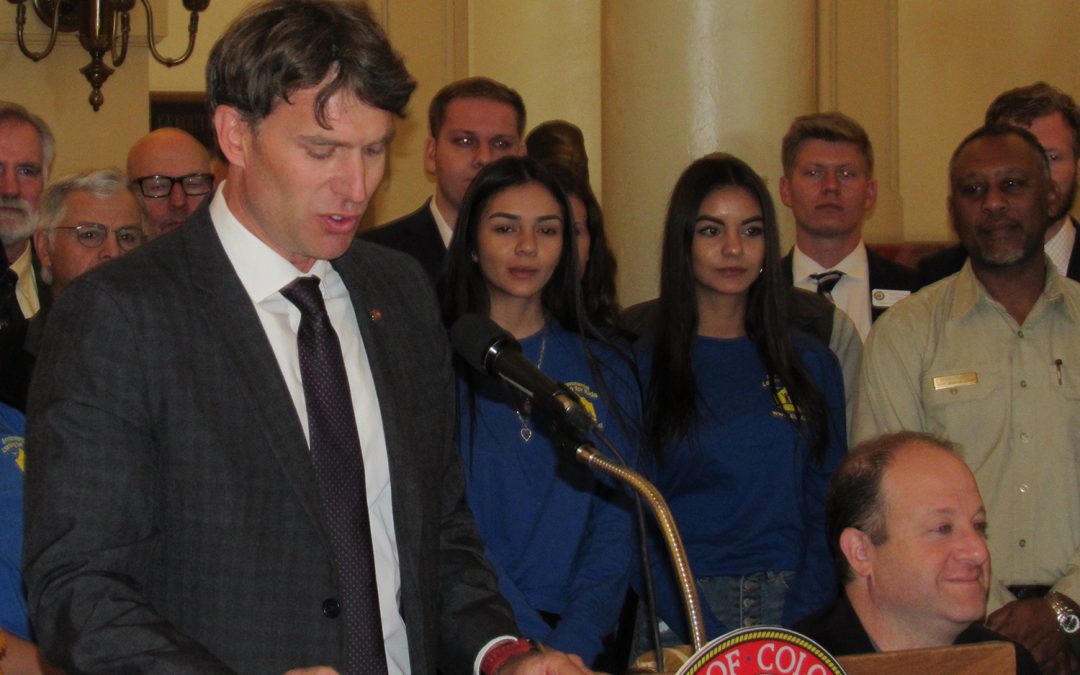 Dan Gibbs, executive director of the Colorado Department of Natural Resources, speaks at a signing ceremony for the shared stewardship agreement between Colorado and the U.S. Forest Service Oct. 23 at the Colorado State Capitol. Credit: Jerd Smith

Colorado joined six other Western states this week in finalizing a “shared stewardship” agreement with the U.S. Forest Service that will help restore millions of acres of deteriorating forests and watersheds.

The new memorandum of understand (MOU), signed by Gov. Jared Polis Wednesday, lays out the details for how the state and federal forest agencies will collaborate and prioritize the thinning and cleanup of hundreds of thousands of acres of Colorado lands.

Like other states across the West, Colorado’s forests have been hit hard by beetle infestations, wildfire and drought, conditions that have left thousands of trees dead or dying and watersheds contaminated by sediment and debris flows. Of the state’s roughly 24.2 million acres of forested land, 15.9 million acres are owned by the federal government, according to the MOU.

“These lands are an iconic part of who we are as a state,” Polis said at a signing ceremony at the Colorado State Capitol. “What’s important is the continuity of management. This agreement will establish a framework to better collaborate.”

A major emphasis moving forward is protecting the watersheds and the water delivery systems that lie within these ailing forests, officials said.

“Colorado is referred to as the water tower of the West,” said Mike Lester, Colorado State Forester. “If you were to map that out, at least one-third of the Continental U.S. falls under the water that we supply…there isn’t a resource that’s more important.” 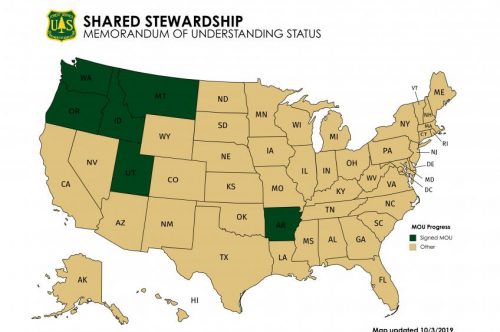 “In the West, this is the way states are going,” said Ellen Roberts, a former Colorado lawmaker and forest health expert who helped create the Colorado Forest and Watershed Alliance last year.

The group’s goal is to advocate for forest health using a holistic approach to ensure lawmakers understand the scope of the problem and the ongoing need for funding.

“I’ve been anxiously waiting to see if [the MOU] would be finalized,” Roberts said.  “The problem is that we haven’t been able to move the needle on forest health in Colorado because the efforts have been siloed and done in isolation from one another.”

The agreement comes as Colorado and other states push to complete federal forest action plans reauthorized under the 2018 Farm Bill. The Colorado State Forest Service will receive some $6 million once its plan is completed next June, Lester said.

Water utilities that rely on those forested watersheds have been trying for years to coordinate efforts and to raise the millions of dollars needed to prevent or reduce the severity of wildfires and to address post-fire impacts.

Mike McHugh oversees watershed health efforts at Aurora Water. He said the new MOU is an important step in the right direction.

“This will institutionalize the shared stewardship approach. It’s not just Denver Water property, or U.S. Forest Service, or Colorado State Forest Service. It’s all land that need to be addressed to restore the forest to health,” McHugh said.

“We’re trying to get there, but it’s very difficult with a state as big and diverse as Colorado is.”